Time for His Next Adventure

JUNE 23, 2020 – When Principal Brad Craddock talks with Glenn High students about careers to pursue, he urges them to find one that will rewarding.

“If you find a career you are passionate about,” he tells them, “you will never work a day in your life.”

Craddock definitely found the right path for him – an educator with Winston-Salem/Forsyth County Schools.

Craddock has spent his entire career with this district – first as a teacher, then as an assistant principal and, for the past 15 years, as a principal.

“I have been blessed to serve this community for 30 years,” he said.

And, since 2009, he has been serving as the principal at the school where he always wanted to be.

Back when he and his friend Ed Weiss, who is now the principal at Mount Tabor, were working on their master’s degrees in school administration, Craddock told Weiss that he dreamed of becoming principal of Glenn one day.

“It was a bucket-list dream that came true for him,” Weiss said. “He cared deeply about Robert B. Glenn High School.”

His connections with this school system run deep. He has not only worked in WS/FC schools for his entire career, he also grew up attending WS/FC schools and graduated from East Forsyth High in 1985.

Now the time has come for him to take a step back.

In part, the timing has to do with feeling that it’s time to shift his focus.

“Three years ago, I had colon cancer,” Craddock said. “When you face something like that, it does change your perspective.”

That shift in perspective and feeling as if he less than 100 percent passionate about going to work every day got him thinking that it might be time to shift gears.

“I need a break from the stress,” he said. “Being a high school principal is a very stressful job.”

At the end of June, Craddock will retire. LeDuan Pratt, who has been the principal at Carmel Middle School in Mecklenburg County, will become the new principal at Glenn.

“Now it’s time for my next adventure,” Craddock said.

“I’m going to take the month of July off and see where my passion lies.” 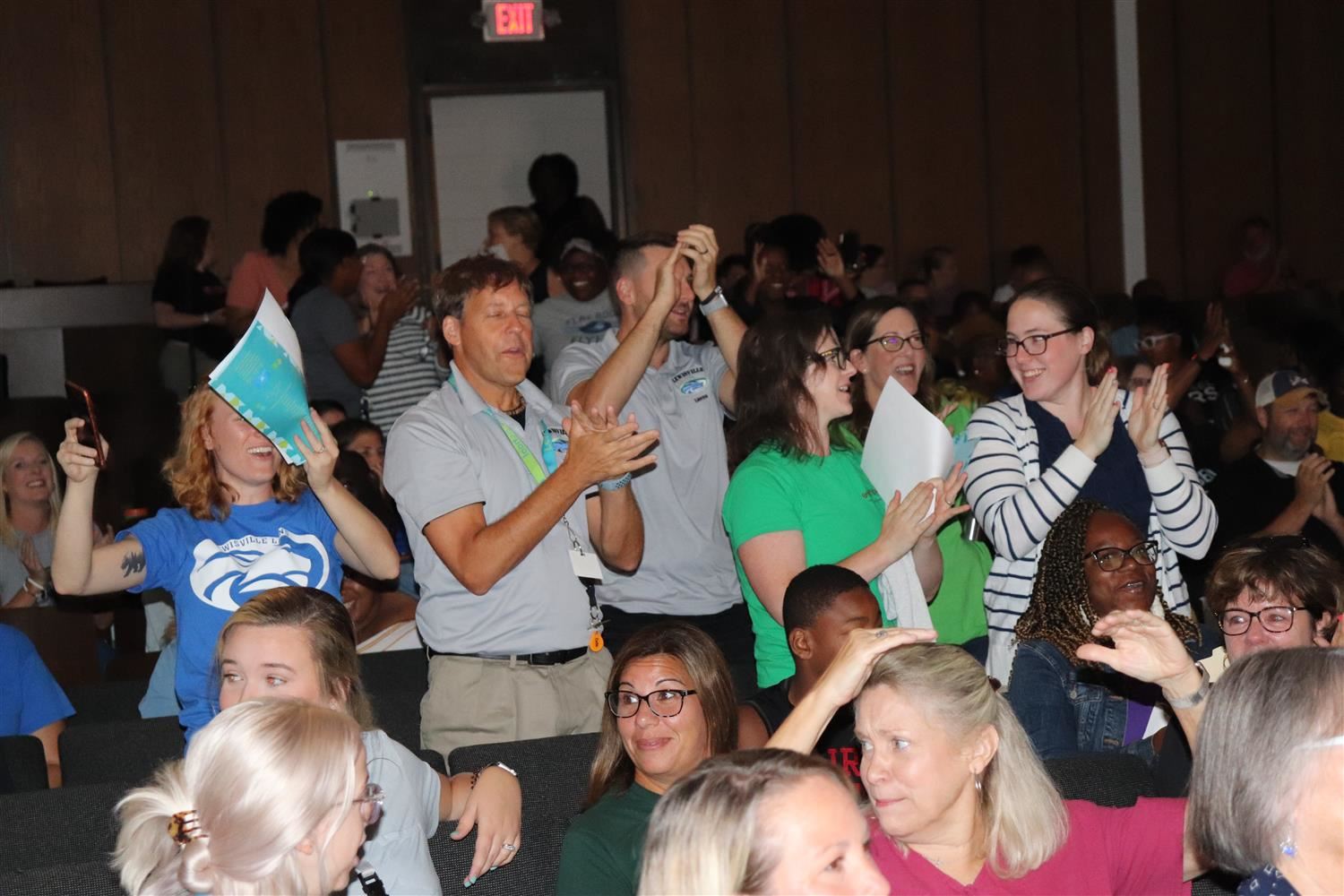 Craddock will be missed.

Joe McCormick is the Athletic Director at Glenn.

One of the things McCormick appreciates about Craddock is how he supports everyone.

“He took a chance on me,” McCormick said.

He has learned a lot from Craddock.

“One of the things he has taught me is how to stay calm under pressure,” McCormick said.

At the time, Craddock and McCormick were standing by a statue of the Glenn mascot – a bobcat by the name of Thomas. He was named after Craddock, whose first name is Thomas.

Chris Leun came to Glenn in 2018 as the Financial Secretary.

“I would say one of his greatest gifts as a person is how patient he is.  He has given me so much patience in my learning the job of a High School Financial Secretary.  While there is still a lot for me to learn, his patience is one of the factors that gave me confidence that I would be successful in my position.”

One of his favorite sayings here is, “Once a Bobcat, Always a Bobcat.”  I’ve heard him say it over and over, but once a student or staff member comes to Glenn, he means it.  He told me shortly after I arrived at Glenn, “I will have your back, even if you are wrong. Making a mistake is OK. That has really stuck with me."

“He is completely student-focused,” Leun said.  “Everything he does is for our students.  He is very selfless and he didn’t want any recognition for retirement.  If folks asked me about a gift, he told me that he wanted something done for the kids.”

“He’s a person of few words and he’s one of the most observant people I’ve ever met.  I think he’s able to look at situations, consider all of the facts, and ponder a solution to any challenge.  I admire his ability to do this. He doesn’t make big decisions without thinking through every possible outcome and he doesn’t make decisions quickly.”

“I have enjoyed working with him very much and I have truly appreciated being a part of the Bobcat family.  None of that would have been possible if he hadn’t given me a chance two years ago.  I will miss him a great deal.”

One of Craddock’s favorite things about Glenn is the diversity of the student body and how it’s filled with young people destined to live their lives following different paths.

That is one reason he helped establish the Firefighter Academy at Glenn. He would like to see more support of students going into such careers as plumbing and electrical work.

In working with students, Craddock seeks to be as open as possible. He also wants them to understand that what can, at the time, seem like a setback can, in retrospect, prove to have been a blessing.

As example for him is not being hired at the first school where he wanted to teach. While it was a disappointment, it meant that he was hired at what was Atkins Middle School, which was in the building that is now home to Winston-Salem Preparatory Academy.

The principal there was Don Golding. It was Golding who saw a future administrator in Craddock and set him on the path to where he is today.

For that, he will forever be grateful. 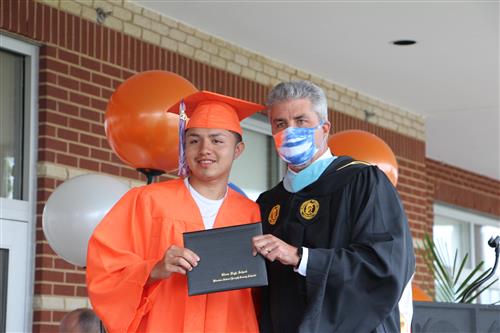 The eastern part of Forsyth County has long been home to Craddock.

“I live about 7 minutes from here,” he said.

Craddock is an only child. When he was growing up, his father drove a truck for Roadway Express, and his mother was a nurse.

Craddock and his wife, Teresa, met when both were students at East Forsyth High School. They graduated in 1985. Although they dated some in high school, they didn’t become a couple until college.

“I teach so I understand his role as an administrator” she said after he became Principal of the Year. “It’s a 24/7 job.”

Asked what she likes about her husband, she said, “Everything about him. He’s funny. He’s attentive. He has a sense of humor.”

He’s good about doing making sure he gives good attention to his family, she said, such as coming home to have supper with everyone before heading back out to an event at night.

The Craddocks have two children. 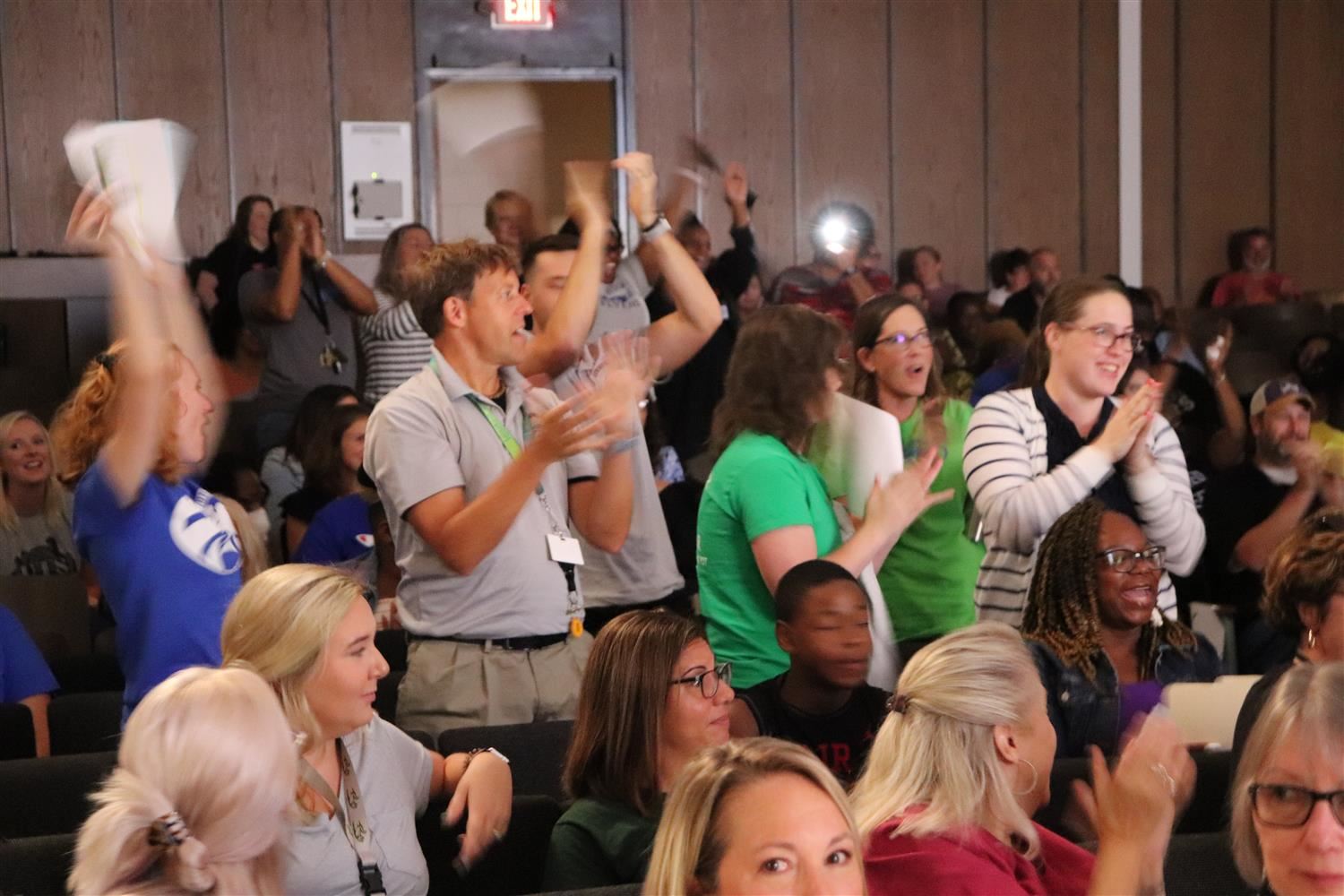 After graduating from the University of North Carolina at Greensboro last year, their son, Aaron, went to work for a transport company in Yadkinville. Their daughter, Ashlyn is going to Appalachian State University with plans to go into some aspect of law enforcement.

“I enjoyed working with young people so it was natural to find my way into education,” he said.

After earning a bachelor’s degree in physical education at Guilford College in 1990, Craddock began teaching at Atkins Middle School, which was in the building that is now home to Winston-Salem Preparatory Academy.

Golding was the principal there, and Craddock credits Golding with steering him into administration. When Golding learned that the Craddock’s first child was on the way, Golding said, “If you’re going to stay in education, you need to go into administration so you can provide better for your family.”

“He started giving me more and more responsibility,” Craddock said.

Craddock likes excitement and he likes each day being different from the one before. So he found that he enjoyed the responsibility.

When he began working on a master’s degree in school administration from Gardner-Webb University, it offered Monday night classes in Winston-Salem. Weiss was also in the program.

They became friends, and, before class on Monday nights, Craddock and Weiss usually met for supper at the Grecian Corner, which is near where classes were held. Sometimes, the conversation would turn to where they would like to become principals one day. For Craddock, Glenn came up.

“I had an emotional connection with Glenn,” he said. “I guess my heart was being called to go to Glenn.”

As it happened, Weiss, who also played baseball and had coached at Mount Tabor when he was in college, said at the time that he wanted to become the principal at Mount Tabor one day. So his dream came true as well.

Craddock still had a few stops along the way before heading to Glenn.

After leaving Atkins and teaching at Hanes Magnet Middle for a time, he became an assistant principal at Carver High School in 1999. He was there until 2005. From 2005 to 2009, he was the principal of the School of Computer Technology at Atkins Academic & Technology High School.

Since he has been at Glenn, he has earned his educational specialist (Ed. S.) degree from the University of North Carolina at Greensboro. He received that in 2013.

It’s been a satisfying life.

What Craddock’s next adventure will be is not yet clear. While he contemplates possibilities, he may be doing a bit of painting at his house, ride his bike and play a little golf.

Perhaps his next adventure will be connected with education in some way, such as working with high school sports.

He has his pilot’s license and has flown Cessnas and other small planes. Perhaps, he will take to the skies again.

Or perhaps, he will do something more down-to-earth. When he was younger, he worked with a landscaping company, and he can operate heavy equipment.

“Anything with wheels,” as he put it.

He will find out.

And he will be remembered at Glenn.

Craddock is a positive person who appreciates the efforts of others, Weiss said. “He is a good man.”

“He has had a great and positive impact on Glenn High…He leaves Glenn in a very good place moving forward…They will forever be grateful for that.”