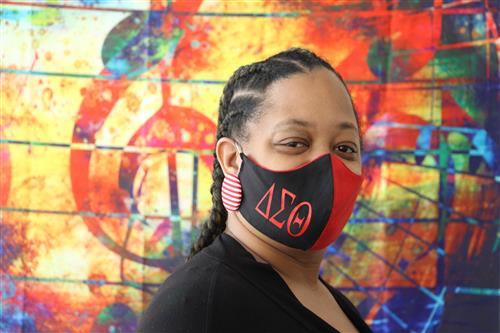 AUGUST 3, 2020 – Shaunne Hall is the new principal at Carter High, which serves students with special needs.

Sonya Stone, who is the data manager at Carter, has known Hall since Hall was the assistant principal there.

“Mrs. Hall is a highly well motivated person in everything that she does,” Stone said.

“She is a person that sees the greatness in others and does what she can to bring that greatness out of them. Mrs. Hall is truly dedicated to helping all students learn and progress. I know she will go above and beyond her vision for our students here at Carter.”

“I am excited and very grateful that Mrs. Hall is our principal. I am looking forward of all the great things that she will be bringing to our Carter family.”

To help give you a glimpse of Hall as a person, let’s go back 25 years.

Hall grew up in Charlotte. She came to Winston-Salem to attend Winston-Salem State University. When she arrived, one thing she knew for certain was that she wanted to be a flag girl performing with the WSSU marching band.

During an early rehearsal, she injured a knee so seriously that performing as a flag girl was no longer a possibility. She was not about to let that stop her from joining that world, though.

“A friend of mine had a saxophone,” Hall said.

Although Hall had never picked up a saxophone and did not know how to read music, she decided she was going to learn to play the saxophone so she could perform with the band.

She asked for help, and people – student musicians, the band director – gave it. She would arrive early for rehearsals and stay late. She would go back to her dorm and practice. (That did not endear her to other residents of her dorm.)

Hall started learning to play the saxophone in August 1995 and, by the time basketball season started in February, she was playing with the pep band and loving it.

“It was the best family ever,” she said.

Learning more about the power of determination and of people helping each other has served her well over the years.

Hall is an only child. Her mother, Michelle Blackwell, was an EC (Exceptional Children) teacher. She did not meet her father, Charles Clement, until she was in college.

As an adult, she came to know and respect him and to connect with her half siblings.

When Hall headed off to Winston-Salem State, she knew she wanted to work with children with special needs. She didn’t plan on becoming an EC teacher, though.

She wanted to own her own childcare business that served both children with special needs and typically developing children. She wanted both groups of children to be enriched by knowing the gifts and needs of each other.

By the time Hall graduated from WSSU with a degree in history and special education, she knew the name of the center she wanted to open – the Elite University of Childcare – and where she wanted it to open it – a building on Reidsville Road. She enrolled at Forsyth Technical Community College to earn the necessary certification.

Over time, federal and state regulations, insurance, and other challenges tempered her zeal, though.

“I think, at the time, I was too young to keep hitting the barriers,” she said.

So she set aside that goal.

Along the way, she had started working as an EC teacher at Carver High. While she was there, she worked with others on developing a pilot program that helped students with special needs who would be graduating to make the transition to the world of work. Students worked at such places as Food Lion and learned such important related skills as taking the bus.

The program proved to be quite successful and became the basis for what is now the Occupational Course of Study (OCS), a school-to-work program that serves students throughout the district.

The opportunity to become a case manager for students with special needs took Hall to a charter school – Carter G. Woodson – from 2002 to 2005.

She returned to WS/FCS as an EC teacher at Atkins Academic & Technology High before coming to Carter as the assistant principal in 2009. Along the way, she earned two master’s degrees – one in Instructional Technology and the other in School Administration. At Carter, she began working on what become an Education Specialist (Ed.S) degree.

In 2017, she went to Glenn as an assistant principal. The people who worked with her there appreciate her as an administrator and as a person.

“Shaunne is an enthusiastic and a trustworthy administrator,” said Shanetta White, the testing coordinator at Glenn.

“No matter what was happening in the building she made it a point to ensure that everyone saw a smile on her face, even in tough times. Her morning announcements before testing, always got the students and staff pumped. Anytime you wanted to vent about things that maybe happening, she was your go-to. This was because people felt comfortable talking to her and could trust it would stay in that safe space.”

“Her honesty, the way she cares for people, and her willingness to continue to learn are things that makes Shaunne the person she is today. There has never been a challenge that she hasn't faced head on.”

“She's an amazing soul who has worked extremely hard adding new programs to Glenn High School such as JEMS, which stands for Jewels Embrace Marvelous Standards. It was a program geared towards female students.”

“She has a way with people that you don't see often. She's going to do great things at Carter but we will miss her terribly.”

Tommie Thompson is the data manager at Glenn.

“Shaunne is a great communicator and relationship builder,” Thompson said.

“She used that to her advantage with students, parents, and staff. I always felt like I knew what was going on with events in the building or with information that pertained to my job.

“​She is honest, kind, and has the most out-going personality of anyone that I know.”

“On a side note, she likes to tell me that I didn't like her when she first came to Glenn. I suppose she must've used her relationship-building skills on me because we're definitely friends now. ​I'm happy for Shaunne and proud of her, but I'm truly going to miss her.”

Both of Hall’s parents graduated from Winston-Salem State, and it was there that she met her future husband, Monte Hall. And, yes, with the name Monte Hall, he has had put up with kidding connected to game-show host Monty Hall.

The Halls have four children. The two oldest – Erik and D’Ray – are out in the world of work. Amaya will be finishing up at N.C. Central University, and Laila is heading to WSSU with plans to become an occupational therapist, a seed that was planted while she helped her mother with programs at Carter.

“She volunteered with me for three summers,” Hall said.

Monte and Shaunne Hall both like riding bicycles, and they regularly ride with friends at Salem Lake and elsewhere. Hall is also a member of a national bicycle riding group called “Black Girls Do Ride,” and she will ride with members locally and on trips to other parts of the country.

“I love to get my passport stamped,” Hall said.

Many of those trips have been cruises in the Caribbean.

Hall thoroughly enjoys messing with people. One way she likes to play with people is to announce that she is fan of their team’s rival. (As it happens, after announcing that she was a fan of Duke some years back, she became a true fan of Duke basketball and Coach K.)

One of the people she liked to play with in that way was Donna Horton-Berry, who recently retired as principal at Carter. Horton-Berry is a Carolina fan. During tournaments, Hall and Horton-Berry would go into the other person’s office when one of them was out and put up the rival team’s paraphernalia.

The two became close friends during their time together at Carter. Horton-Berry has a farm where she raises chickens. Hall would go there and help with such projects as building a chicken coop and, when Horton-Berry was out of town, Hall would drop by to take care of things. While at the farm, she met a few snakes, skunks and raccoons.

Hall stopped playing the saxophone many years ago. She still loves music, though. She likes it all – R&B, classical, jazz.

Over the years, music has been a real gift, she said.

“It’s my place of serenity.”

Hall’s career has been a rewarding one.

She loves the work she does every day so much that, in some ways, she said, it’s like a year-round vacation.

In addition to doing her best to serve and nurture young people over the years, she has also worked hard to support the people with whom she works.

“I am a strong believer in empowering the staff you have,” she said. “We give them leadership opportunities.”

She is sorry that, for now, students and staff member cannot come into school each day so everyone can be with each other in person.

For Carter students and their families, virtual school can be particularly trying because, for many students, it’s simply not possible to do some things online.

“It is very hard for our students to access the curriculum,” Hall said.

The staff at Carter is doing everything they can to get ready to help students once virtual school starts as well as making preparations for students returning to the building.

Although Carter cannot operate the transition-to-work program for students who will be graduating at the moment, they have already made plans with the people at the Career Center and John F. Kennedy High, which share a campus with Carter, to have transition students to start working in those schools as soon as students return to the building.

“We have to continue to foster those skills,” she said.

She is also doing everything she can to maintain a great attitude.

“You have to stay positive, especially during this time,” she said.

Tasha Hayes – who now works out of the Exceptional Children's Division’s Transition Office in EC Support/Secondary Transition – has known Hall since Hayes was an EC case manager at Carter.

Hayes wants parents to know that Hall is a good listener and an excellent problem-solver and will do all she can to support students and their families.

“She has an open mind and her end goal is for all to be treated fairly,” Hayes said.

“I think she is very passionate about the education of students with disabilities and their post-secondary outcomes. She is committed to planning for and engaging her students and easing the worries of her parents as we navigate through our current pandemic.”

Hall also works hard to support those on the staff, Hayes said.

“She has high expectations of herself and will challenge those close in her circle because she is a natural leader. She's a peacemaker.”

Plus, she is fun to work with.

“She is very enthusiastic!” Hayes said. “She is your biggest cheerleader for whatever you need!”

“I cannot express how happy I am that Mrs. Hall is the new principal at Carter High School. Seeing her growth and watching her on transform herself on her personal and professional journey from an assistant principal to principal has been amazing to watch.”

“She took this journey and is taking the newfound professional obligations with it very seriously as this is what she wanted to achieve!”