Superintendent & School Board Members Honor Members of Class of 2020 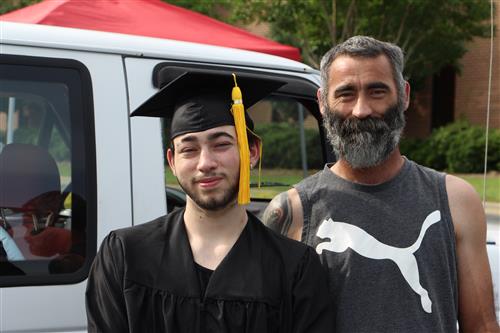 AUGUST 3, 2020 – On the evening of Thursday July 30, Kyler Miears and his father, Jeff Miears, were first in line for the drive-through graduation ceremony recognizing students from throughout the district who completed their graduation requirements during summer school.

Kyler Miears went to Reynolds High, and Reynolds principal Leslie Alexander was there to congratulate and honor him on the stage set up in front of the school system’s Administrative Building.

“These kids work hard,” Alexander said. “They deserve to have a celebration just like everyone else…We want to make it special.”

Quite a distinguished group had gathered to honor the graduates.

Superintendent Angela Hairston was there along with four members of the Winston-Salem/Forsyth County Board of Education – Chair Malishai Woodbury, Marilyn Parker, Leah Crowley and Deanna Kaplan. 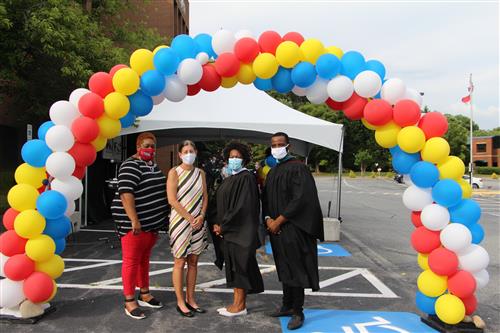 The other principals there to honor their graduating seniors included Brad Royal of Reagan, Rodney Bass of East Forsyth, Spencer Hardy of Parkland, and LeDuan Pratt of Glenn, who was joined by assistant principal Colin Tribby.

Melita Wise, who is the principal at North Forsyth, was there to help the team from North Forsyth High – led by assistant principal LaQuisha Henry-Linder – that had worked hard to organize it all.

“My good friend has done an amazing job of putting it all together,” Wise said.

Henry-Linder said she was happy to do what she could to honor the graduates.

Perseverance is the key, she said.

As students and their families turned into the parking lot, they were greeted by a sign that said, “Graduates, Are You Ready?” Next to the sign was a cluster of balloons, one of which said, “Congrats, Grad.” 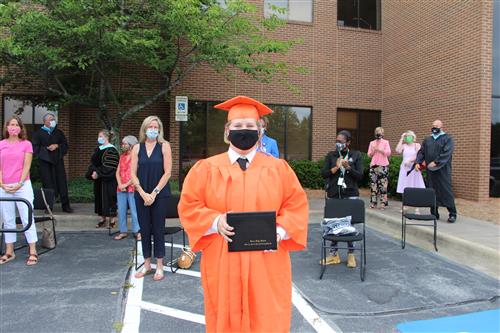 Waiting in line behind Kyler and Jeff Miears were such graduates as Avalo Cruz De Jesus of Parkland and Justin Lasater of Parkland. Some graduates had so many supporters – parents, grandparents, friends – that it took two vehicles to hold them all.

Once the ceremony started, when it was a graduate’s turn to mount the stage, the graduate would step into an archway made of balloons, and Gary Robinson, who teaches English at North Forsyth, would announce them.

The graduate would step onto the stage and be congratulated by their principal, while, on the other side of the stage, the clapping would begin while friends and family members in cars would take photos.

The next stop was the station where Robert Ralph, who teaches science at North Forsyth, took formal photos of each graduate.