This story originally appeared in the “Kernersville News.”

AUGUST 3, 2020 – Thriving on challenges, Glenn High School’s new principal, LeDuan Pratt, is looking forward to getting the students back on campus and making the school a place where students feel they are challenged.

Pratt grew up in Charlotte, NC. After graduating from Charlotte Country Day in 1995, he attended North Carolina State University (N.C. State) for his bachelor’s degree in business management finance, graduating in 1999. It was another 11 years before he returned to school to earn his Masters in Educational Leadership from Gardner-Webb University in 2010.

Pratt explained that he is the type of person who thrives on challenges. Giving an example, he shared that he originally attended N.C. State as an engineering major, but he changed majors during his junior year after learning that Charlotte was an up-and-coming financial center. Still wanting to complete his college career in four years, while hearing that it would be hard and having an added challenge of his grandmother expecting him to make the Dean’s List, Pratt proved himself and showed that it could be done.

As a basketball player, Pratt said he had the drive and motivation both on and off the court.

“When you have that type of drive and motivation, it’s nothing to you. You get to relish in the victory,” he said. “That’s the way I like to go about my life. I like to have challenges put in front of me and conquer them.”

Pratt said he was drawn out of the finance world, working as a credit manager for what was eventually bought out by Wells Fargo, and into education by a fellow church member.

“I had that math background in engineering and he knew I wanted to coach basketball,” Pratt said, noting that there was a position available for both areas. “I said I always wanted to teach, so let’s go ahead and do it.”

Pratt entered the education field through lateral entry. He found his first teaching experience at Forest Hills High School in Marshville, N.C., a Title 1 school, where he coached girls varsity basketball for two years. He later coached East Union Middle School boys’ basketball and West Charlotte junior varsity boys basketball.
Throughout his teaching career, Pratt taught algebra and geometry and added that most of his career was served in turnaround schools. 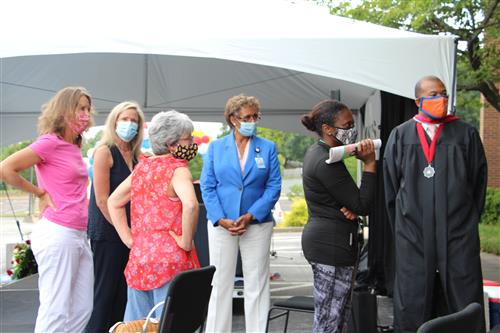 After teaching at Forest Hills, Pratt transferred to Porter Ridge High School, where he worked from 2006 - 2007. He said because it was a more affluent school, it wasn’t a challenge for him, so he decided to come back and help in his own community. So, he began working at West Charlotte High School, which he noted is a Title 1 school. He worked there from 2007 - 2010.

“I was one of 56 new teachers brought in to turn that school around. While there, I specifically asked to be given the EC (Exceptional Children) students and the low students, or the challenged students. And while there, I knew to move the dial in the school, you have to raise the bottom tier,” he said.

It was while he was at West Charlotte that Pratt decided to go into administration. He transferred to Garinger High School, where he was the dean of students from 2010 - 2014.

“They had a different model under the Bill and Melinda Gates Model with five small schools in one school, and there were a lot of gangs in that school,” he said, noting that he was over two of those five schools. “While I was there, that school transitioned to one school and when that happened, we rebuilt the school where it boosted the principal up to making her an area superintendent.”

After serving as dean for two years, Pratt rose to serve as assistant principal for a year and a half and then moved up to become the principal.

Following serving as the principal there, Pratt went to METS@Olympic from 2014 - 2017 and then Carmel Middle School from 2017 - 2020, where he attended as a junior high student, before taking the new position at Glenn. 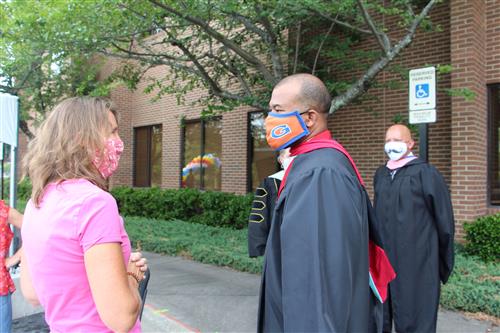 “I enjoy the reward of seeing students in the same way of seeing that challenge and struggle and being guided and teaching to make sense of it,” he said. “And, I just love seeing students’ minds blossom and grow.”

Working mostly in Title 1 schools, Pratt said he has seen so many of his students’ stories of struggling but then making it through and having the chance to see them walk across the stage as they graduate high school.

Pratt shared a few inspiring stories from his career. One was a student that was taking algebra for the third time as a senior.

“We were all rooting for him. He would come in early and stay after. He was a great kid and finally passed that exam. I remember the elation on his face when he was finally able to walk across that stage,” he said.

Another student Pratt recalls, he said would call him inspiring.

“I was the first black male teacher he had ever had. He would call me inspiring and the reason he ended up going into education and teaching math. He ended up being Rookie of the Year and did a video, where he talks about me, though not by name,” he said. “It’s stuff like that that keeps you going. Knowing someone was inspired by you.”

While he was successful in the classroom, Pratt said he chose to go into administration because since he had such success as a teacher, he thought he could make a bigger impact by implementing his same strategies for other teachers to help struggling students.

As an administrator, Pratt said he has a democratic leadership style and listens to all parties.

“If you have that dictatorship type thinking, that means you think you are the ultimate and all-knowing being, and I don’t think that is how things work in society. Everyone has an opinion and should be valued,” he explained.

Pratt’s first day at Glenn was July 1, adding that he chose to fulfill the position for several reasons.

“I love the demographics here and from what I can see from the data, I saw that there is a lot of potential for that school. I wanted to make it a school that attracted everyone,” he said. “I want it to be a school that everyone looks at as a lighthouse school – a school that kind of shines. Seeing that potential really attracted me to that school.”

“I want people to recognize Glenn as a good school for their children to attend and not just the other school in Kernersville. I think some people look at it as their rival. I want them to look at Glenn as a viable school for their education and know that I am doing everything that I can to make Glenn a challenging school and a place that will prepare them to be good citizens, whether that be going to a four year college, community college or the workforce.”

In his new position, Pratt said what he is looking forward to most is getting in the school with the kids.

“That’s where all your joy and excitement comes from - seeing the students mature into young adults,” he said.

Pratt and his wife Shannon have three children, two daughters – a rising junior and rising sophomore – and a son, who is a rising fifth-grader.

When he isn’t working, Pratt enjoys spending time with family, traveling and going to his son’s sports, which include basketball and football.