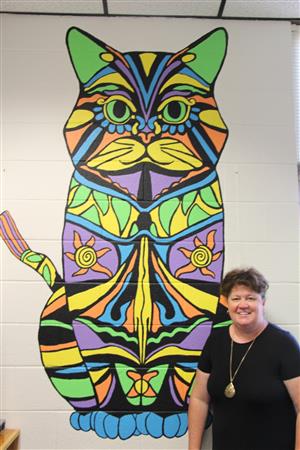 AUGUST 5, 2020 – Anna Balser has rejoined the Cool Cats of Lewisville Elementary as the principal.

Balser started her career in education in 1994 as a primary reading teacher at Lewisville Elementary. For the next 17 years, she served there as a teacher and, later, as the curriculum coordinator.

Balser is delighted to be back at Lewisville Elementary.

“I feel like I am returning home,” she said. “I was thrilled when I was named principal and got to come back.”

Her colleagues in Winston-Salem/Forsyth County Schools speak highly of Balser. One of them is Matt Dixson, the principal at Meadowlark Middle.

“I first had the privilege of working with Anna when I started teaching at Lewisville Elementary,” Dixson said.

“She was the curriculum coordinator and ran our new teacher induction program at the school. As a new teacher, I found myself seeking advice and guidance from her on a regular basis. Her advice was always well thought out, practical, and always kept the student at the center.”

“Anna and I then reconnected at Southwest where she came to be the Instructional Facilitator. As the principal, I was able to see Anna through a different lens than when I was a teacher. Anna has a solid foundation and knowledge of instruction and data. As the Instructional Facilitator she was instrumental in the success teachers had. She knew how to hold staff accountable, while also maintaining their respect.” 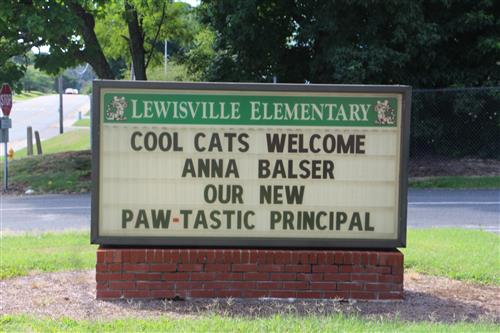 “I couldn’t be more proud of Anna and all that she has accomplished. Lewisville is lucky to have her as their new principal!”

Balser’s connections to the school system are quite deep.

And, growing up, Balser attended WS/FC schools. She graduated from West Forsyth High in 1989 after attending Southwest in the days when it was a junior high.

Coming to a new school during these times presents many challenges. At the top of Balser’s list at the moment is finding ways to connect with teachers and other members the staff and with students and their families.

“I know I want to get to know the kids,” Balser said.

“That has always been really important to me – to know the children in the schools and their families and their stories.”

Everyone has a story, she said, and that is part of what makes each of us unique. Knowing the story of someone’s life helps to connect to the person.

When working with young people, she may also talk with them about the importance of making choices that keep us on the path that we want to follow.

“What do you want your story to be?” she may ask a student.

One way she has worked to connect with students and families so far was by holding a “Popsicles with the Principal” drive-through event on Monday, Aug. 3.

Amy Taylor, who is the Instructional Facilitator at Rural Hall Elementary, knows that Balser has the attitude and flexibility to meet the challenges of today.

“Anna tries to find the positive in all things,” Taylor said.

“When we first started experiencing changes at Rural Hall Elementary with principal Diamond Cotton moving to Kimberley Park in March, then going into remote learning soon after, Anna kept saying that we have to ‘embrace the change.’  I actually had that statement put on a T-shirt for her birthday.”

“She did not know then how much she was going to need to embrace that statement with being named principal and the challenge of starting a school year under these circumstances. However, Anna has the tenacity to do that with a calm spirit and the ability to laugh along the way.”

“She is organized, she knows how to use the strengths of those around her to help her and, at the same time, she can help others develop their leadership skills. Anna is a wonderful collaborator. She will not ask anyone to do anything that she isn't willing to do herself.”

“Lewisville has scored a valuable asset to their staff. I will miss my wonderful coworker, but I gained a true friend during the time we worked together.”

In addition to the joy of returning to the school where she began her career, Balser is glad to be back in the building that serves as home for Lewisville Elementary.

“It’s got such great character,” Balser said. “And there is a lot of history.”

The building was built in 1948 – back in the days when it was simply Lewisville School, and it served students through high school. So it has such classic features as a true auditorium.

“The auditorium is one of my favorite places,” she said.

Balser is the oldest of two children. Their mother Linda Oliver was pharmacy technician, and their father, John Oliver, was a handyman.

“He could fix anything – build anything,” she said.

Although Balser cannot fix anything or build anything, she feels as if she inherited a desire to learn along with a gift for figuring things out from him.

“I am a person who is always learning,” she said.

She also enjoys knowing about this and that.

“I know a little bit about a lot of things.”

When Balser headed off the University of North Carolina at Chapel Hill, she planned to pursue the same career as her mother.

“I started out as a pharmacy major,” Balser said. “I really enjoyed science.”

Although Balser didn’t decide to become an educator until she was in college, growing up, she did know she loved working with young people.

At church, she worked in the nursery or helped out in Sunday School at Immanuel Baptist in Clemmons. In high school and college, she worked in summer camps.

“Everything I did always revolved around kids,” she said.

Over the years, Balser has enjoyed working with young people in part because they say funny things and tell the truth.

One example she remembers fondly is when a student said, “You are my second-favorite teacher.”

“I always remember that.”

That was in the days when she was teaching fifth grade at Lewisville. When she asked the student who her favorite teacher was, the student said, “Mrs. Brown.”

Anna and Doug Balser were introduced at church by one of Balser’s students. They have now been married for going on 26 years and have two children.

Kaci is a senior at Reagan. She plays volleyball.

Brenton is a student at West Virginia University and a member of the U.S. Air Force Reserve. He just finished his training at Lackland Air Force Base in Texas. Because of coronavirus restrictions, the family was not able to go there to see the graduation ceremony.

The family lives in Pfafftown, which now makes for a relatively short commute for Balser. And, yes, she does have cats at home. Butterball and Rosebud have been around for a while and Bean, a young cat who moved in recently and is doing his best to tear up the house.

The family goes to Bridges Church, which met at Old Town Elementary before the church found a permanent home on Reynolda Road.

Both Anna and Doug Balser are big sports fans. With her being a Carolina graduate and him being a Wake Forest graduate, tensions can run high during a game.

“There have been times when we have to watch games in separate rooms,” Balser said.

The Balsers enjoy traveling. In addition to going to such places as Florida to watch Kaci play volleyball, the family enjoys visiting historical sites.

When Balser picks up a novel, it might be something by Patricia Cornwell or David Balducci. One of her favorite picture books for children is The Carrot Seed about a boy who knows that the carrot seed he planted and is watering will come up one day no matter what others say.

When Balser worked at Southwest Elementary, she worked with Debbie McIntyre, who is now is the principal at Jefferson Elementary.

“I'm so excited for the Lewisville Elementary School family to have Anna Balser as their new principal!” McIntyre said.

“Anna is a gifted and humble servant leader who exemplifies all of our WS/FCS core values. I'm so thankful to have worked with her at Southwest Elementary for five years.”

“At Southwest Elementary School, Anna served as the Curriculum Coordinator who fully understood curriculum and how to deliver it. Anna always worked to support and grow our teachers in their pedagogy.”

“We had so many good times together at Southwest Elementary School with many smiles and laughs along the way! Anna's joy for teaching and leading shines through in all that she does. She has always sought to listen first then understand from others.”

“She has a natural charisma that makes people feel welcomed and at home. Anna builds lasting relationships with people and truly brings joy to others lives.”

“I'm so thankful that our life journeys crossed at Southwest Elementary School and again now, as principal colleagues and friends!”