Making Sure Students Know She Cares 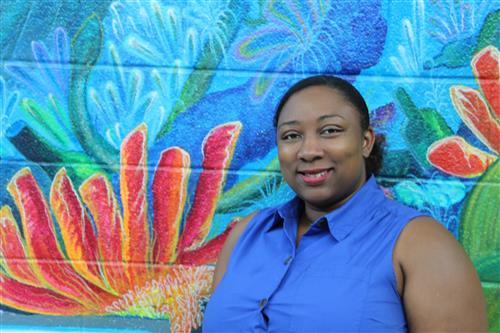 AUGUST 6, 2020 – Dr. Raphael Green-Hughes found her calling as an educator at what was then Kennedy Middle School.

In a pilot program there, she worked with students who had fallen behind and were working to catch up.

“My job was to instill hope,” she said.

To do that, she said, “I needed to understand the whole child.”

From there, she embarked on a career with the Winston-Salem/Forsyth County school system in which she has served as a teacher, an Instructional Facilitator, an assistant principal, a principal intern, and, now, a principal.

Before coming to South Fork, Green-Hughes was an assistant principal at North Forsyth High, where Melita Wise is the principal.

“Raphael is calm and wise,” Wise said.  “She builds culture and grows people.”

“Her relationships with students and their families are strong, and she will build a community of support to serve them.”

Green-Hughes grew up in Greenville, S.C. Her father, the Rev. Dr. Rudolph Green, was a minister and her mother, Patricia Green, served as a community advocate.

Green-Hughes has an older brother and two young sisters. Her brother now lives in Philadelphia, and both sisters now also live in Winston-Salem.

“I came to Winston-Salem as a college student at Salem College,” she said.

In South Carolina, she was a strong student at a high school with an International Baccalaureate program, and Salem was one of a number of colleges that recruited her and offered her a scholarship.

When she came to Salem for a visit, she discovered that the liked the atmosphere of the school and of the wider community. She also liked the idea of going to a women’s college.

When she started college, she envisioned a career in medicine. That changed while she was participating in a summer program created to recruit people into the medical field.

Watching a surgeon at work, she said, “I realized that’s not where my passion was.”

As much as she appreciated how important such work is, she said, she saw that was not the path for her.

She switched her focus at Salem to sociology and psychology and, in 1999, graduated with a bachelor’s degree in psychology. She went on to earn her Master of Arts in Teaching degree at Salem in 2001.

While working on her master’s degree, she began working with students in middle school at Kennedy. As a participant in a pilot program called the Gateway Acceleration Program (GAP), she worked with Lisa Bodenheimer - now principal of Wiley Magnet Middle – and Jen Watson – now an Instructional Facilitator - to help  students who had, for one reason or another, had difficulties in school. (In 2002, GAP became Gateway Prep Academy.)

“The students who came to me had often already had an experience of school failure,” Green-Hughes said.

Green-Hughes graduated from Salem knowing she wanted a career in which she served young people.

“In that first year, I truly fell in love with education,” she said.

As she sees it, she has a “heart of compassion” for young people and others in the community.

Green-Hughes went on to earn a master’s degree in teaching at Salem in 2004.

An integral part of Green-Hughes’ desire to serve is wanting to help students dealing with challenges that can make it harder for them to succeed, such as growing up in a low-income home, and, many of the WS/FC schools she has chosen to serve in have a high percentage of students eligible for free or reduced-price meals.

“Education is the key that unlocks the door to overcoming challenges,” she said.

She taught at Bolton and Griffith elementary schools, served as Instructional Facilitator at Latham (now part of Diggs-Latham) and Gibson elementary schools and as the assistant principal at North Forsyth High.

When it comes to helping students succeed, Green-Hughes said, much of that is about being present with them and letting them know she cares.

She works to build relationships in such ways as making a point to learn students’ names and finding out what they enjoy and appreciate.

Having fun with them also helps. On days when costumes are a way to celebrate, she comes in dressed to amuse. Once, she turned herself into a cardboard box with arms and legs. In elementary schools, she tells kid jokes and high-fives students.

In 2017, Green-Hughes began working on her master’s degree in School Administration at High Point University.

As part of that, she participated in the University’s Leadership Academy, which works with WS/FCS and other partner districts to prepare principal candidates to return to their home districts ready to work on transforming “low-performing schools into learning environments that result in high performance for all students.”

Before enrolling in the program at High Point University, Green-Hughes earned a Doctor of Divinity degree at the Apex School of Theology in 2014.

She is an associate minister at Union Baptist Church on Northwest Boulevard, where Bishop Sir Walter Mack serves as the senior minister.

Green-Hughes’ husband, Alvin Hughes, is also an associate minister at the church.

“We met at church,” Green-Hughes said. “We were both Praise Team leaders.”

They worked with each other for a year before Hughes suggested they grab a bite to eat.

“This isn’t a date,” he made a point of saying.

They hit it off right away.

“We have been together ever since,” she said.

It is the second marriage for both of them, and their blended family includes five boys and one girl. The oldest – Cameron – has graduated from college. Jamel is a senior at the University of North Carolina at Charlotte.

Exavier and Alvin III are students at West Forsyth High. Both Chance and Destiny will be in the eighth grade. Each thought it would be nice to have a school of his or her own. So Chance is at Flat Rock Middle and Destiny is at Clemmons Middle.

With Green-Hughes’ responsibilities as a principal, minister and parent, she doesn’t have a lot of down time. One thing she does find time for is writing. Often, it’s poetry. She has also participated in spoken-word performances.

She does most of her writing at the end of the day.

“It’s therapeutic for me,” Green-Hughes said. “It’s one of the things I do to unwind.”

“Much of what I do is very spiritual. Inspirational, encouraging words is a lot of what I write about.”

Green-Hughes has enjoyed working with students in elementary, middle and high schools. That said, she is delighted to be principal of an elementary school.

“I believe my personality is well-suited for the elementary level,” she said. “In elementary, we have an opportunity to inspire a love of education.”

“I believe this role is where passion and purpose merge.”

Green-Hughes came to South Fork in May. So, although it was already a virtual world, school was still in session and she was able to connect with students, parents, staff members and people in the wider community before the summer break.

“I felt a warm welcome,” she said. “I am very excited about this school community.”

Her excitement extends to such community partners as Tapestry Church, which meets in South Fork Elementary and supports the school in a number of ways. 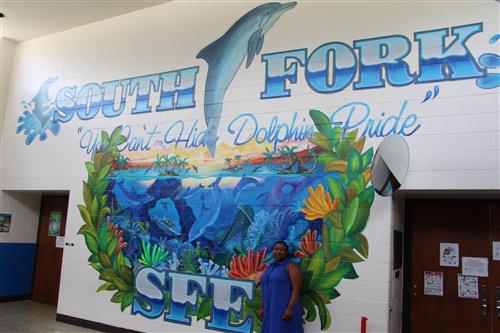 Before the school year ended, she was able to participate in the drive-through graduation ceremony for fifth-graders and a drive-through ice cream social for third graders. In additional to virtual meetings with her staff, she also organized a drive-through Teacher Appreciation lunch.

Since then, she has worked to engage staff members with a series of 15-minute chats designed to help her get to know people.

At High Point University, Green-Hughes was in the same cohort as LaQuisha Henry-Linder, who also went on to become an assistant principal at North Forsyth.

“Dr. Green-Hughes is a model of an instructional leader devoted to her calling to serve and advocate for the needs of our learners and educators all while keeping her lens centered around the ‘whole child’ and the ‘whole teacher,’” Henry-Linder said.

“She is a lifelong learner on a mission of facilitating the minds to spark creativity, increase leadership capability/capacity in the building, promoting a sense of belonging and teacher efficacy that creates an atmosphere of excellence and a collaborative culture where all voices are important, heard and respected.”

“Her desire to stay abreast of the current research, finding new ways to implement the curriculum, and working with others is unmistakable and inspiring. Her love for education and her heart to support and encourage educators and students to become lifelong learners and reflective practitioners readily just pour out of her life.”

“As a colleague, I quickly developed a sense of respect and admiration for Dr. Green-Hughes. Even in the early days, it was evident to me that she was Intelligent, Intentional, and a game changer. I could see that she was very passionate about the work that was needed and what she did or believed, with a natural ability to engage others.”

“Of particular value, to me, as a fellow colleague was Raphael’s servant heart, team player mind-set, enthusiastic ability to embrace change, an advocate for those most in need, ability to work with all levels and capability of educators and students and an unwavering commitment to exceeding student/parent/staff expectations.”

“She has inspired others to achieve higher goals because she encourages others to reach out past their boundaries.  When asked, Raphael gives helpful criticisms of their work and then would support and assist in implementing solutions.  Raphael is a strategic thinker and highly conscientious in the planning, follow-through, and organization of systems and processes within the school.  She is reliable, dedicated, and demonstrates a good work ethic and interpersonal skills.”

“Raphael is hardworking and a top-performing Administrator. She is a natural leader and doesn’t shy away from her God-given talents!”