AUGUST 12, 2020 – Each summer, the 1,200 people who work in the school system’s Operations Department have a long list of projects to take care of.

They strip and wax floors. They paint classrooms. They refinish gym floors. They work on heating and air-conditioning systems. They pave parking lots.

With the demands of COVID-19, the list became even longer.

Workers have had to build and install protective shielding in schools and offices to make sure that people stay healthy.

They have had to consult with principals to find out what principals need to take care of staff members and students when they are able to return to buildings.

Workers have had to create and install signs in schools. Some tell visitors which way to go. Others are used to help people maintain a healthy distance from others.

Workers have moved furniture in classrooms to ensure health spacing for students when they return to classrooms. They have removed items that have a soft surface that might retain moisture, such as a rug at the front of the classroom where, in the past, elementary students gathered to listen to a story.

The goal is to make sure that classrooms are ready for students when they are able to return to schools. 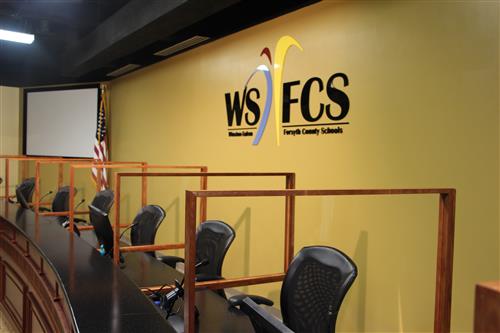 Doing all of that has required some juggling. Because of such issues as personal health and the need to take care of children at home, some people in Operations have taken time off, Richards said.

In some cases, others in the department have shifted responsibilities.

As a way of taking care of bus drivers who won’t be driving buses for at least the first nine weeks of school, Richards said, “We have offered work in our schools to bus drivers.”

Meeting all the current demands means that, in some cases, a project that doesn’t need to be taken care of right away is put on the back burner.

“Some projects have been put on hold,” she said.

In the days when families came to the school for open house, workers worked hard in the days leading up to open houses to make the school grounds as attractive as possible. With open houses being virtual this year, they were able to focus on other projects.

Some projects can’t be delayed. A project that might cost $5,000 when done in a timely manner could conceivably cost $50,000 if postponed too long.

In some cases, students learning at home at the end of the 2019-20 school year enabled the people in Operations to go ahead and take care of projects that couldn’t have been done while students were in the building.

“We were able to take a lot of those projects and move them up,” she said.

One example is painters being able to go ahead and paint the interiors of two schools – North Forsyth High and Wiley Magnet Middle.

Child Nutrition is part of the Operations Department. They began providing take-home meals for students once virtual learning started, and, with students learning at home for at least the first nine weeks of the coming school year, Child Nutrition will continue to offer meals for students and their families. A number of schools in the district offer meals for pick up, and buses and vans are taking them into some neighborhoods.

It has been quite an introduction to a new job for Richards. She took over as Chief Operations Officer on March 1 after Wayne Loflin retired. Who knew that, before the month was out, students would be learning online, and she would be dealing with challenges she had not even imagined?

One thing she and others have learned in dealing with the challenges of COVID-19 is the importance of being flexible.

“Each day, we are navigating it as we go,” Richards said.