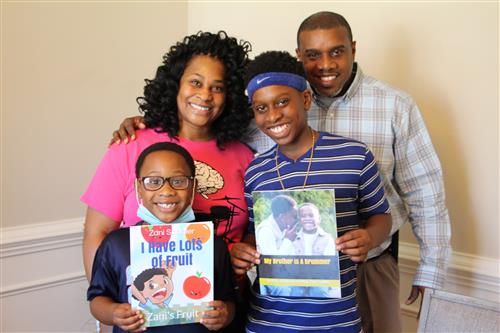 SEPTEMBER 4, 2020 – At the age of 7, Petree second-grader Zani Saddler is already the author of two picture books.

One book is called I Have Lots of Fruit: Zani’s Fruit. The other – My Brother Is a Drummer – is about his older brother, Zaren.

Now in the eighth grade at The Downtown School, Zaren has been playing the drums since he was 1 year old. Zani, who has been making art since he was 2 or 3, sees the book as a tribute to his brother.

“I love my brother and, everywhere I go, I think of him,” Zani said. “He is always going to be in my heart wherever I go.”

With Drummer, Zani both wrote the story and drew the pictures.

Both boys consider their talents a gift from God. 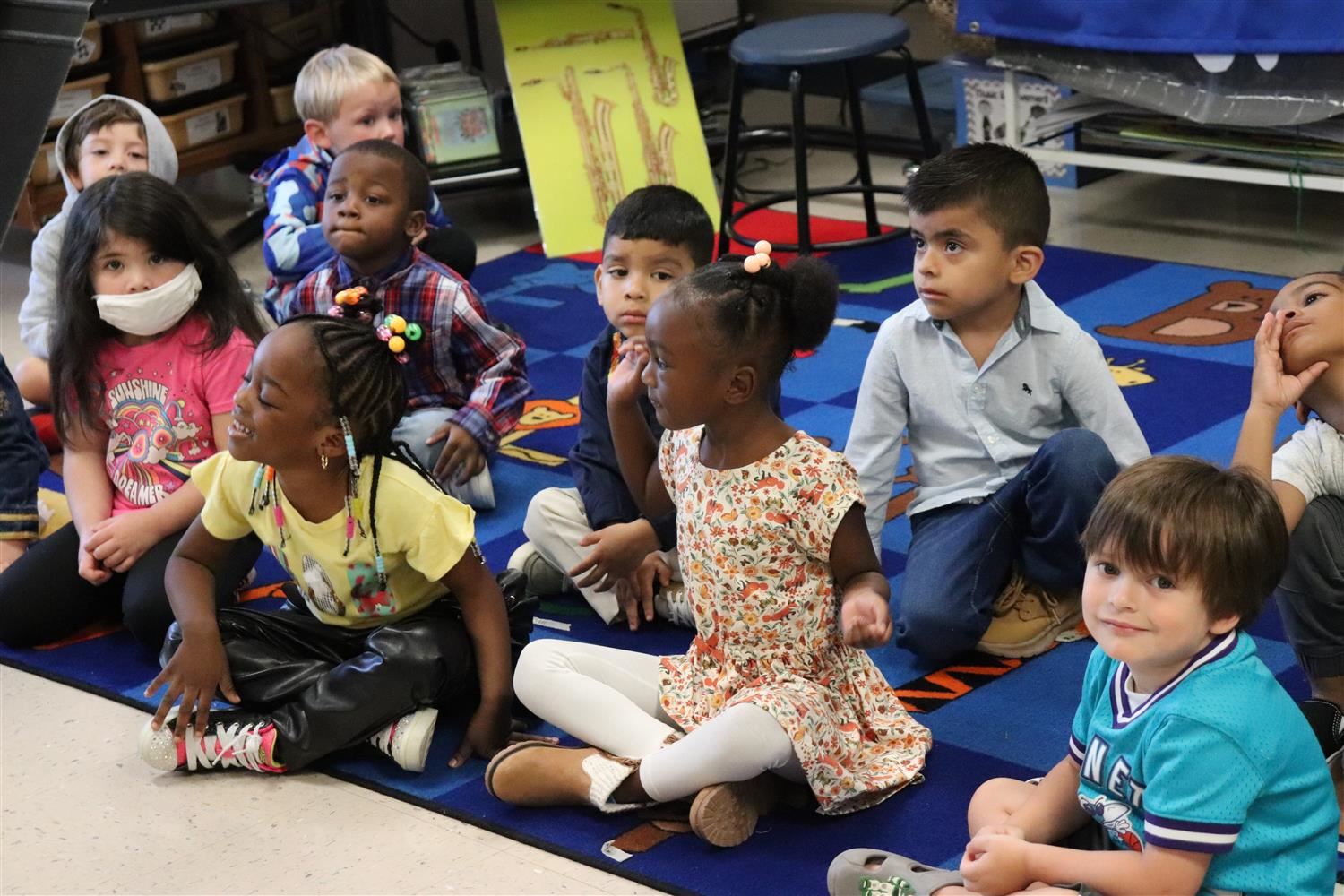 Earlier this year, his mother, Lashonda Saddler, decided it would be good to share his books with the wider community.

“Zani is phenomenal,” she said. “I thought it would be something the world would appreciate.”

Her husband, Patrick Saddler, thought that was an excellent idea, and they published the books through Amazon’s self-publishing program.

Zani knows he has many more books in him.

Zani certainly has the energy to reach that goal. At the moment, he is working on about 10 books. He likes to work on one for a while and then work on another.

The Saddler family is deeply connected to Winston-Salem/Forsyth County Schools. Patrick Saddler is the assistant principal at Kimberley Park Elementary. 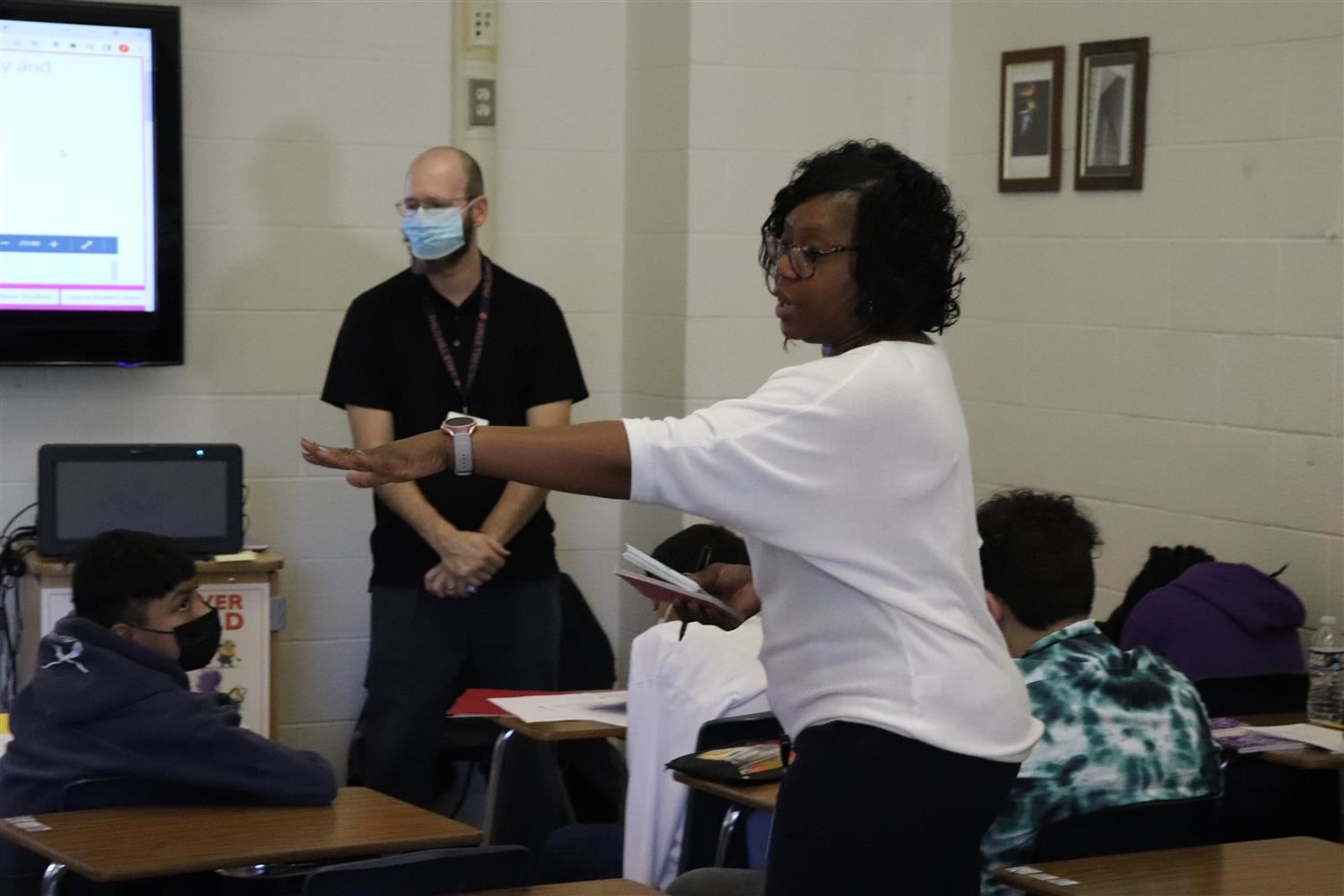 Patrick Saddler is also a musician. He plays a number of instruments, including drums. It’s worth noting that Zaren discovered drumming on his own and was already an enthusiastic drummer when his father started working with him.

Patrick Saddler is a minister as well. He serves as a minister at St. Phillips Apostolic Church, where his father, Michael Saddler, is the senior pastor.

Both boys are active in the church. Zaren plays music for church services. Zani, who has nicknamed himself “Bible Boy,” likes to get up in front of people and read scripture.

He also likes drawing pictures inspired by a verse that is special to someone. If someone wants him to draw a picture inspired by, say, John 3:16, he is happy to do it.

The Saddlers, who have been married for 20 years, refer to both of their sons as “miracle boys.”

In the years before Zaren was born, Lashonda Saddler had four miscarriages. They felt that God wanted them to be parents one day. So they prayed and stayed focused on the day to come. 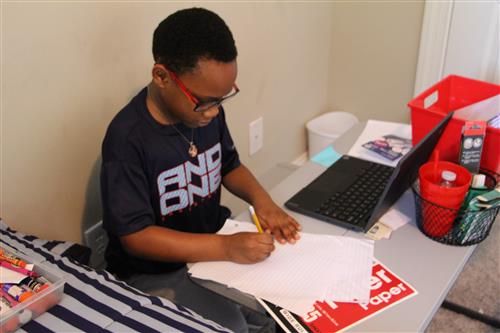 “All odds were again him,” his father said.

Zani also faced challenges when he, too, was born early.

Of Hebrew origin, he name means “Gift of God.”

Zani is looking forward to putting butter on that perfect rice and eating it.

Zaren envisions a career in music.

“I do plan on being a professional drummer as soon as I can be,” he said.

In addition to playing at church, he has established a business called ZP Luxury Lessons to teach drumming to students in kindergarten through eighth grade. 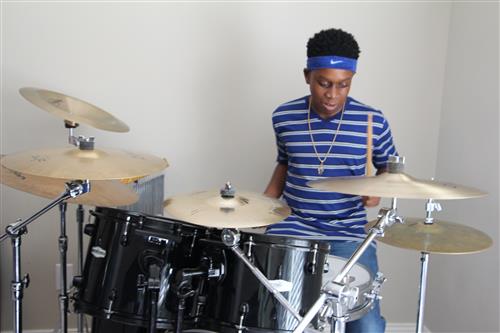 Zani wants to become a successful writer and artist. In the meantime, he looks forward to the day that Steve Harvey invites him to join him on his television show.

“He wants to tell Steve that he is proud of the work he is doing for little kids (smile) and, of course, show him his books,” Lashonda Saddler said.

Both Patrick and Lashonda Saddler are from this area. Lashonda Saddler’s father is also a minister, and the Saddlers – who recently celebrated their 20th anniversary – met at an event in which several churches participated.

Although she liked him right away, it took her a while longer to realize they were meant to be together.

Patrick Saddler earned his bachelor’s degree in Music at A&T State University. They were still dating when he was awarded a full scholarship to Southern Illinois University in Carbondale to earn his master's degree in Music.

At first, they planned to wait until after he completed his master’s and returned home before they married.

He proposed. They married and headed to Illinois together. While there, Patrick Saddler became a drummer for the university’s gospel choir.

He also began drumming for a church in Paducah, Ky., which was about an hour and 15 minutes away from Carbondale, Ill., on Sunday mornings to play the organ for a church. The Saddlers joined an Apostolic church in Paducah and became active in the music ministry, teaching Sunday school and more.

During the summer of 2017, they decided to return to this area.

“I heard the voice to come back home and help my dad with the ministry,” Patrick Saddler said. 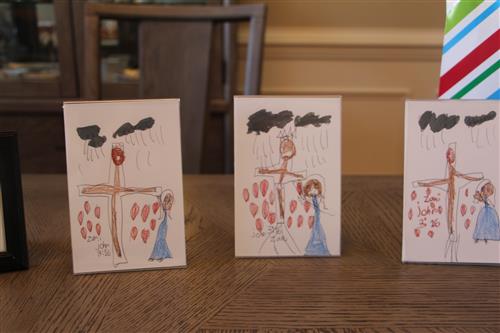 Her wonderful volunteers, Gehrs said, include Kathleen Tatter and Joe and Sandi Turner and their daughter Jodi Turner.  The support she received through Donorschoose.org, she said, included “Kimberly and Mike Richards whom I have never met, but who are from the area and have also been very supportive of my class even though they do not personally know me.”

Because of everyone’s support, she was able to buy 45 copies of Zani's first book - I Have Lots of Fruit:  Zani's Fruit – for the kindergarten students at Kimberley Park.

Gehrs believes that reading the book and connecting with Zani will be a valuable experience for students.

“I'm always looking for creative ways to get our students excited about reading,” Gehrs said.  “I don't want our students to just learn to read. I want them to experience a love of reading too.  Because this book is a perfect book for kindergarten students to read with their parents, I thought it would be a great gift for our students.” 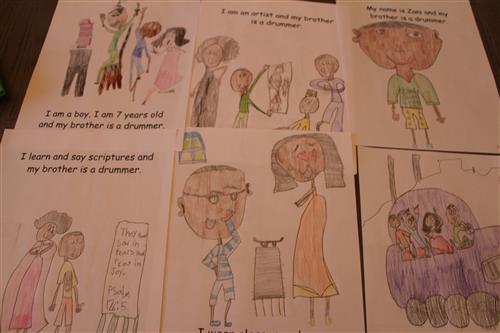 “I want our students to be inspired. What better way to do this than by giving them a book that is written by a child who is close in age to them and who also looks like them. I thought this was especially important because of everything that has been going on in our world and our community lately. Our students need to see positivity.”

“I thought it would also be a great idea if Zani could autograph the books for each student. Then on one of the Fridays, he could Zoom with our kindergarten students and read the book to them and answer any questions they might have.”

“Later on in the year, I would like to do it again with his second book My Brother Is a Drummer and have Zani explain to the students how he drew the pictures in the second book.”

“These experiences are great ways for our students to make connections to vocabulary words like author, illustrator, and the title of the book.  They can also learn about the writing process.”

“My hope is that we can do this project every year with Zani and our kindergarten students.”