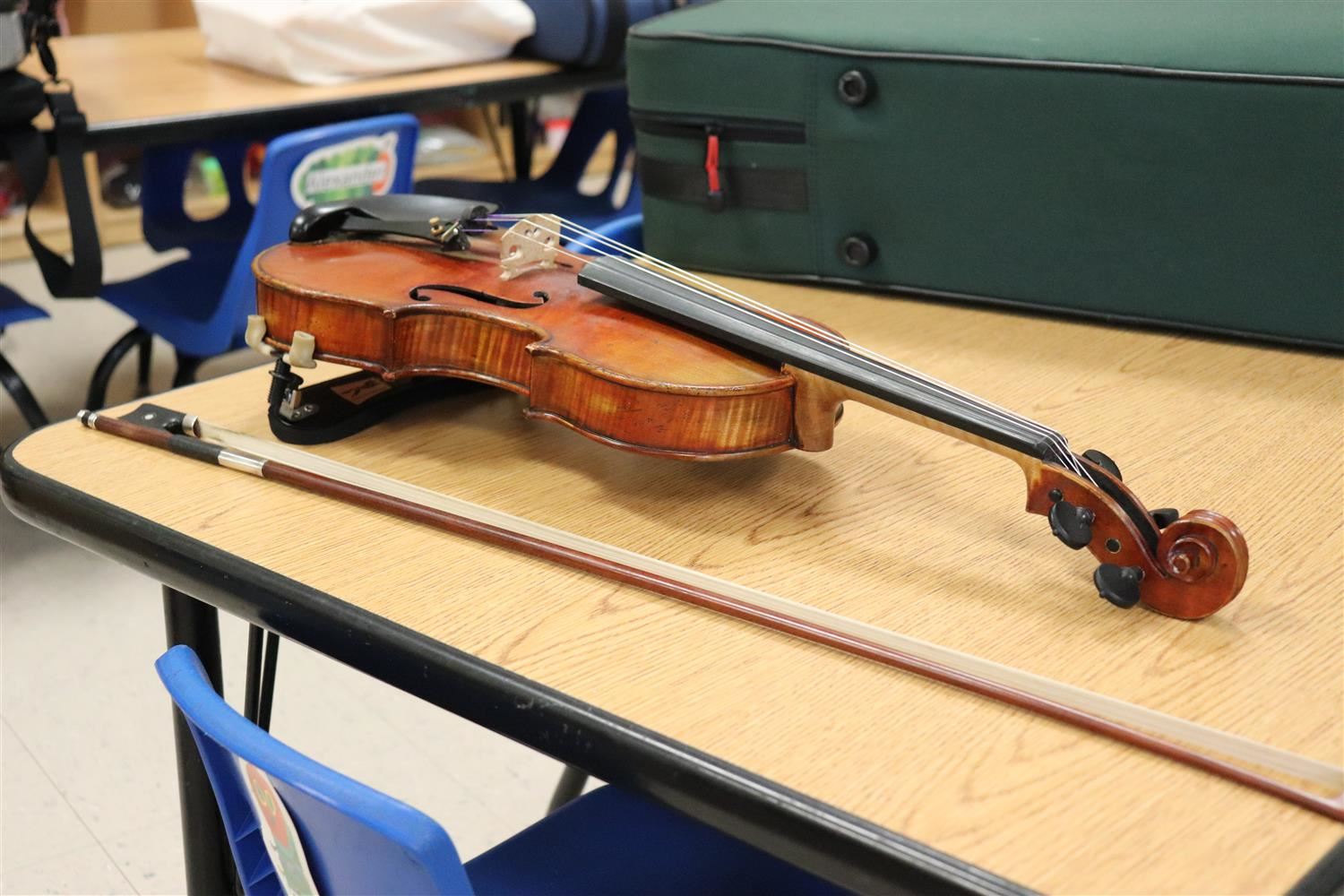 “I use two words to describe myself – ‘compassionately driven,’ Dobson said.

She is driven to work hard to do whatever she can to support students. That dedication is coupled with a desire to make students and teachers feel cared for and respected.

Her favorite word is “absolutely.”

“I absolutely believe we can do anything we put our minds to,” Dobson said.

When it comes to the phrase “seeing is believing,” she offers an alternative – “we have to believe it to see it.”

If you believe you can do something, you will stay focused on reaching your goal.

“I was fresh out of college and she was my mentor,” Richardson said. “I watched in amazement as she commanded her classroom and instruction. I was struggling terribly with my classroom management, and she told me I had to be consistent with my practices.”

“I have to say what I mean and mean what I say. That advice has always stuck with me. She stills gives me great advice, as my mentor and friend to this very day. I love her dearly and will continue to glean from her expertise.’

“Cassandra is very direct. There is never any ambiguity or gray area. Because of this, you will never question what has to be done, or the direction that has to be taken.”

“She gives very sound advice. And with that advice comes the tools and help you need to achieve your goals. If you’re willing to work hard, she is willing to work just as hard to help you.”

When Dobson was young, she did not yet know she would grow up to be the principal of an elementary school.

She did know she would grow up to have a doctorate.

Dobson was the youngest of 11 children. When she was young, no one in her family had yet graduated from a four-year college. She decided that the way she was going to establish a place for herself in her family was to graduate from college and go on to earn a doctorate.

Dobson grew up in Caswell County. Early on, she envisioned a career in the world of medicine. She did indeed spend the early part of her working life as an office manager in a doctor’s office. Along the way, though, she became interested in education.

“I loved working with children,” she said.

After starting out as a teacher assistant, she was on her way. She enjoyed her time as a teacher.

“I have always been a successful teacher because I worked at it,” she said.

After teaching for a few years, she found herself wanting to expand the impact she had on children as an instructional leader.

“I felt like I could better support teachers and students as an administrator,” Dobson said.

After teaching at Mineral Springs and then North Hills Elementary, she became an administrative intern at Diggs-Latham Elementary for the 2011-12 school year. She appears in a staff photo from that year that still hangs on a wall at the school. 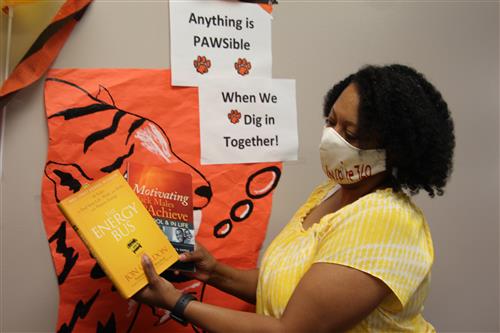 She went on to serve as the Learning Team Facilitator at Speas Global Elementary and then headed to Konnoak Elementary as the assistant principal.

There she worked with Toneika Gravely Davis, who is now the assistant principal. When they met, Davis was an Instructional Facilitator at Konnoak.

“Dr. Dobson is a student-centered administrator who is fair and consistent,” Davis said. “Her famous words are ‘It’s about the children.’ Her decisions are always based on what’s best for all students.”

“Dr. Dobson is a true confidant who will always lead and guide you to becoming a better version of you both professionally and personally. She exemplifies honesty, integrity and professionalism.”

During their time together at Konnoak, Davis said, “she often provided guidance, shared words of wisdom and supported me on my journey to becoming an assistant principal. Dr. Dobson has been a great role model and supporter since the day I met her. I am forever grateful for the role that she played in shaping and molding me into the assistant principal that I am today.” 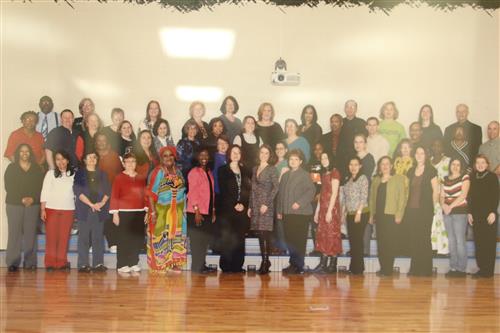 While Dobson was at Konnoak, she received her Doctor of Education Degree in Educational Leadership from Gardner -Webb University in 2017.

It meant a lot to her that her mother – who lived to the age of 95 - was alive to see her reach that goal.

When Dobson was growing up, her father worked in a factory, and her mother worked as a caregiver in homes that needed assistance taking care of someone in the family. Although the family did not have a lot of money, Dobson said, “we were rich in the things that mattered.”

Love, respect, support – they were all there in abundance.

Two of their children – Naquita Yellock and Brittaney Yellock-Trinidad – are teachers. Yellock teaches fourth grade in the academically gifted program at Gibson Elementary, and, Yellock-Trinidad, after teaching at North Hills Elementary, now teaches at Ibraham Elementary.

Darryl Yellock works in Asheville at a Texas Roadhouse restaurant. Tony Dobson is a long-distance truck drive who owns his own truck. Deon Dobson is a firefighter in Charlotte.

In 2018, Dobson headed to Ibraham Elementary at the assistant principal. She was at Ibraham when she was named principal at Diggs-Latham.

Although it was challenging to continue pursuing her education while working and devoting herself to her family, Dobson enjoyed staying on the path to learning and has no desire to set it aside after earning her doctorate.

“I like to call myself a life-long learner,” she said.

She is the sort of person who might read a book on education two or three times to make sure she had gleaned all she could from it.

And it meant a lot to her to do whatever she could to sharpen her skills as educator and answer the question, “How can we best support those who need the most support?”

While Dobson was an administrator intern at Diggs-Latham, she had no idea that the school would be where she first served as principal.

She is delighted to be back. “It feels great,” she said.

A bonus that came with returning to Diggs-Latham as principal is discovering that about 25 percent of the teachers and other staff members from that time are still there. So, she already had strong connections at the school.

Amanda Gordon teaches art and serves as the Magnet Coordinator at Diggs-Latham.

"I remember Dr. Dobson from when she completed her administrative internship at our school in 2012; in fact, I featured her in the yearbook that year,” Gordon said.

I have also worked with her some as I mentored teachers at other schools where she has worked.  So, when Dr. Dobson was announced as our new principal, it was simply a ‘school family member returning home. We were glad to see a familiar face, and it was a smooth transition as she immediately jumped in during the spring to help us wrap up our year.”

“Faculty, staff and teachers are grateful for her dedication.  She coined the phrase ‘Tiger Nation, which we are now using as one of our school hashtags.  We look forward to continuing to work with Dr. Dobson as our leader."

Diggs-Latham is a PAWS school, which stands for Pay Attention, Always be prepared, Work and act responsibly, Show respect, and, soon after arriving in June, she came up with a motto for the school: “Everything is PAWSible when we dig in together.”

Diggs-Latham is classified as a low-performing school. One of her goals is to support student achievement so the school leaves that classification behind.

“It all goes back to the belief,” she said. “I believe we will be able to exit low-performing status.”

Shelia Burnette is the principal at Konnoak.

“Having worked with and observed Dr. Dobson in her professional and personal capacity, her strengths include her intelligence, her willingness to help others improve themselves, her willingness to listen to the needs of others, her ‘never give up’ spirit and her overall problem-solving skills.” Burnette said.

“She is resourceful and willing to put in the time and the work to meet the needs of others.  She is ‘student-centered’ and makes decisions that support goals, vision and mission of the organization she is leading.

“Her gift is being able to use previous experiences to help shape current work, her calm in the midst of a storm and her teaching and coaching of others to help them reach new heights and abilities. Dr. Dobson is also gifted because of her heart and genuine desire to see everyone succeed or reach their fullest potential when they show ‘will.’"

“I have watched Dr. Dobson tell a teacher who said, ‘I don't know what I'm doing, coming or going, sinking or swimming’ that they could make it if they just keep trying and are willing to put in the work.  I have also seen her care for individuals whose personal health needs were overriding their ability to work.”

“We've coached and encouraged staff who just need to come breathe, vent and reflect, realizing that self-wellness leads to the ability for teachers to look out for the wellness of others.  I've seen her throw herself between a staff member and another stakeholder to help avoid a dangerous situation. And I have seen her have numerous discipline conversations with students that ended with ‘Now, go make the rest of the day the best of your day’ because she knew everyone deserved a second, third or fourth chance to learn from their mistakes.”