National Hispanic Heritage Month is celebrated in the United States from Sept. 15 to Oct. 15 as a way to recognize the contributions and influence of Hispanic Americans to the history, culture, and achievements of the United States. 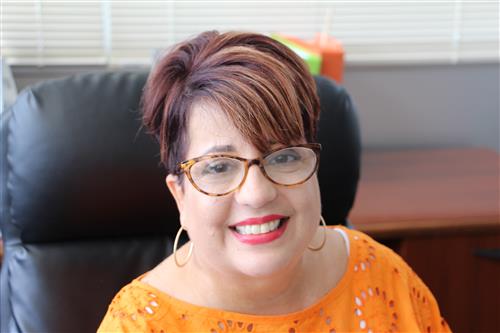 SEPTEMBER 23, 2020 – Asked whether she has a favorite number, the new principal at the Career Center, said, “Two.”

“We are social people,” said Dr. Nancy Martinez. “You need two people – one to start a movement – two to expand it.”

She pictures those people working as equals.

The importance of working together as equals means so much to her that it’s part of her email signature:

Having grown up in Puerto Rico, Martinez is fluent in both Spanish and English. That has served her well as an educator.

“It allows me to reach more families,” she said.

Martinez spent the early part of her career in education in Milwaukee, Wisconsin as a research and writing teacher for Marquette University and as a school counselor, assistant principal and principal. In 2015, she headed to North Carolina to become the principal of an elementary school to Charlotte – Starmount Academy of Excellence. There, she established a dual-immersion language program.

In Wisconsin, she also worked in middle and high schools. Working with high school students is her first love, she said, so she was delighted to hear about the opportunity at the Career Center.

She enjoys working with high school students in part because she likes helping them prepare for taking that next step in life into the wider world.

“You can really see some of the dividends,” she said.

Teri Neely, who is the assistant principal at Starmount Academy of Excellence, spoke highly of Martinez.

“It isn’t uncommon to find Nancy with a new book each week. Nancy is a self-proclaimed nerd. She reads professional educational literature for fun. Nancy believes in working hard and trying her best at everything.”

“Nancy puts in long hours. It wasn’t uncommon for me to call her at 7 p.m. and she would answer the phone still at her desk working.”

“Nancy genuinely cares about people – staff, students, families. She will not hesitate to go out to a family’s home to make sure they have food or to ensure their power gets turned back on. Nancy is extremely gifted at convincing people to do things.”

With the encouragement of Dr. Martinez, Neely said, people would provide money for such items as coats for students.

Martinez works hard to connect with students and make them feel as if they belong, and, over the years, she has been invited to a number of weddings and graduations. One of her most satisfying experiences was attending the GED ceremony for a student who had experienced bumps along the way.

The student grew up in a family connected to gangs. Martinez met him in high school when she was at school that had a business academy. Initially, the student’s ideas for a business tended toward get-rich-quick schemes.

Wanting to help him take a more positive path, she made him an offer. For every book he read that she suggested on such topics as business, she would read a book that he suggested. That went well until he disappeared from her world one day.

One day, he came to see her. It turned out that he had spent time in jail. The whole time he was there, he told her, he kept hearing her voice “nagging” him to take a more productive path. He did. He had earned his GED and the ceremony was coming up.

As she told the story, she teared up a bit– something that tends to happen whenever she talks about him, she said.

“I wanted to be in the middle of the action,” she said.

“She has a “wiener dog” named Hercules, who, at the age of 17, has health issues that make it hard for him to walk. So, for strolls around downtown, she puts him a red wagon.

Her home is just a few minutes from the Career Center, and, once she arrives her in office, her view includes the Reynolds Building.

When Martinez was growing up in Puerto Rico, her father repaired televisions and her mother worked as an administrative assistant. She has one sibling – an older brother who works in IT and lives in Florida with his wife. A job change means they will soon be moving to Charlotte, a delightful prospect for Martinez. Since moving to Winston-Salem, she has stayed active in Forest Hill Church in Charlotte.

Each year during the holidays, Martinez returns to Puerto Rico for a couple of weeks.

When Martinez was young, she was quite shy. In high school, she decided to try her hand at acting.

“I originally took theater to help me not be so shy,” she said.

She discovered she liked it, that she was good at it, and that it did make her more outgoing. In addition to acting in high school theater productions, she also would write short plays to be performed at her church.

She likes the arts in general. She likes going to concerts and playing music while working. At schools, she would sometimes play music in the background as students worked.

“The arts are a way of connecting with people,” she said.

She is also a big fan of chocolate and keeps a bowl of Twix in a bowl just outside of her office so people can have a treat.

When she started college in Puerto Rico, she envisioned pursuing a career in broadcasting – not on screen but as a director or producer.

When Martinez was young, math was a source of anxiety. When she was in high school, she had a teacher who helped her become more comfortable with math. In doing so, she discovered that she was good at it, too.

She also discovered that she liked helping other students when the teacher asked her to become one of his tutors. That experience opened her to the possibility of helping others as an educator, and, in college, she soon decided that education was the path for her.

She headed to Marquette University in Milwaukee on a Presidential Scholarship. At Marquette, she earned both a bachelor’s degree in high school education. Thinking that working as a School Counselor would be the best way for her to serve students, she went on to earn a master’s degree in School Counseling and then spent “10 wonderful years” as a counselor.

While she was a counselor, she saw that “there were some changes that needed to be made,” including infusing more diversity into the curriculum.

Understanding that suggesting needed changes as a counselor doesn’t have the same impact as suggesting them as an administrator, she began working on her earning her Principal Certification. As part of the program, she was assigned to an urban school that had mostly Hispanic and black students.

At one time, most of the students had been white.

Initially, she said, “it was hard for the alumni to connect with the student body.”

One of her challenges was establishing a sense of connection and helping everyone understand they can learn from each other and enrich each other’s lives.

In 2019, she earned her Doctor of Education Degree at North Central University in Minnesota.

The Career Center shares a campus with John F. Kennedy High and Carter High. As it happens, all three schools have a new principal this year. Shaunne Hall is the principal at Carter, a school for students with special needs, and William Wynn is the principal at Kennedy, a magnet school that offers four career academies.

All three principals being new to their roles has helped them connect, Martinez said, and, as they have been getting to know each other, they have been talking about ways to connect the schools and their programs.

“Nancy has been a breath of fresh air!” Hall said. “She has a genuine positive attitude that aligns with mine so it has been easy to develop a relationship with her. We are moving toward being a ‘well-oiled machine’! Her personality and positive energy are infectious.”

“We are working very well together to create an environment for all our students to work together in an inclusive setting.”

Although she is still in her early days at the Career Center, she already has a number of plans.

One is to make the Career Center, a school where students could earn a Seal of Biliteracy, which recognizes that they are fluent in two languages.

Being fluent in two languages makes the brain more fluid, she said. “If anything, it makes you smarter.”

“It enriches your life in ways you don’t even imagine.”

Another is to find ways to encourage students who might have not been attracted to Career Center in the past to come there. The Career Center offers several paths. It offers CTE (Career Technical Education) classes in such areas automotive repair, carpentry and cosmetology. It offers AP (Advanced Placement) classes – some of which would not have enough students if offered at regular high schools – and it offers such specialty programs as Japanese and digital drawing and illustration.

She also wants to encourage students to consider different options. Perhaps a student thinking about CTE courses could consider taking an AP course.

Alis Mulero, who is the Dean of Students at Starmount Academy of Excellence, said that Martinez served as a mentor to her.

“I am a recent administrator because she saw something in me and developed my leadership skills, Mulero said.

She started at as teacher. Thanks to the support of Martinez, she became an Instructional Facilitator and then Dean of Students.

“I owe her my professional growth,” Mulero said. “She is a colleague who became a very good friend. We had cried and laughed together for the past three years. Her void in our school is evident. She is small, but she is bigger than life in so many ways. I will be forever grateful for all her mentorship.”

“One of Ms. Martinez's strengths as an administrator is her interest in the whole approach of the child. She advocates for education as well as the students' social and emotional needs. Her legacy in our school is evident in our Dual Language program. Her interest in developing our student heritage language and also giving the opportunity to all our students to acquire two languages shows her passion for giving students the advantages they will need in a global society.”

“Ms. Martinez has her door always open to listen and support students, teachers, staff, parents, and community. She is available and works together to find solutions and create plans. I miss her funny jokes and cheering disposition. It made work feel like a family.”

“She is an avid reader and a life-long learner. Her gift is the ability to be constantly learning and sharing her knowledge to all that want to learn from her. She will give you a book every time you see her if she can. She has a way with words. Her gift as a personable person gives her the advantage to speak to humble people and people in big positions. This gift helped our school to find grants, create programs, and wipe tears.”

“She is very dedicated, organized, and responsible.”