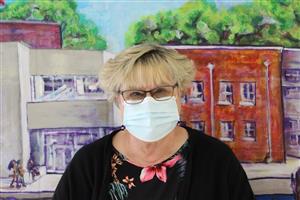 NOVEMBER 13, 2020 – Betty Ann Brandis spent the early part of her life in a small community where it was a given that, when you went to the grocery store, you would see someone you knew.

In the mid-1990s, her husband’s job brought the family to Kernersville.

“When we moved down here,” she said, “I didn’t know anybody.”

Early on, that was hard. After she started working as a secretary in the office at East Forsyth High, that changed.

“Once I started working here, I got a family,” Brandis said. 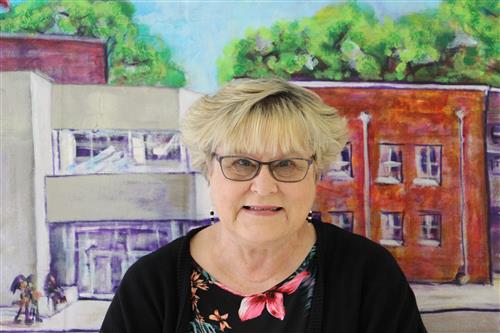 Now the time has come for her to enter the next phase of her life.

At the end of November, she will retire.

Asked how she hopes to be remembered, Brandis said, “I hope they remember that I cared.”

There is no question that many, many people know that Brandis is someone who cares.

“Betty Ann is the voice, the face and the heart of East,” said Alice Valdes, the MTSS (Multi-Tied System of Support) Coordinator at East Forsyth.

“She cares for everyone – whether staff, student, or community family.  She brings serenity and composure to every event she attends.”

“She represents East in every way as the mother of a graduate and now as the first person who you see when you arrive to campus.”

“I can’t imagine Betty Ann not being at her desk greeting me each morning as I come in for another day at work. For the last couple of years, before COVID, we would eat lunch in my classroom and we called it our ‘Lunch Bunch.’ This was the 25-minute period of the day where we just let loose and release some steam with other colleagues.”

“We had ‘Fun Time Friday,’ and she often would share some funny personal stories or videos of cute animals or crazy, funny things from YouTube.” 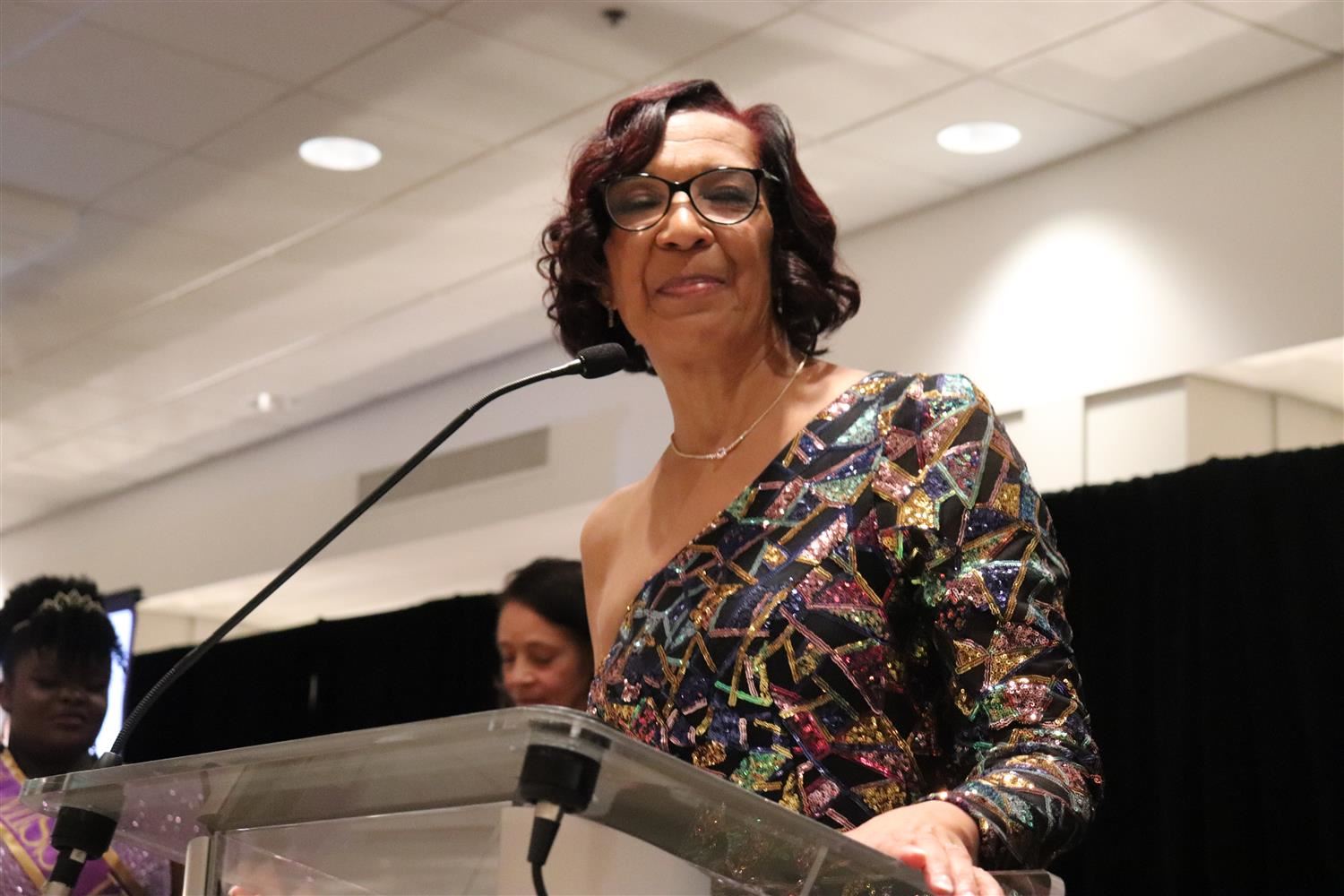 “Her smile is contagious. Personally, I think of Betty Ann as my work mom and a great friend.  She is selfless and loving.  There isn’t one fundraiser for the school or for my kids that she hasn’t supported. My own kids think of her as family and she keeps their pictures at her desk.”

“She deserves a great send off and I hope she can enjoy herself, her husband, Keith, and her boys in the next phase of her life.  I know she will come back and visit because she will always tell you ‘Once an Eagle, always an Eagle.’”

In recent years, Brandis has had to deal with serious health challenges. In 2004, she learned she had colon cancer. Multiple surgeries followed. She no longer has a spleen.

“The first couple of years were rough,” she said. “It took me 10 years to feel pretty good.”

On Nov. 19, Brandis turns 65. She still loves her job, and, if not for coronavirus and her concerns about its dangers for her, she would stick around.

“I love these kids,” she said. “I enjoy teen-agers. I enjoy interacting with them.”

“I enjoy interacting with the parents.”

For her, treating everyone with respect is very important. Even after she gets to know parents, she continues to address them by their last names.

With so many students coming through the office at one time or another, she knows most of their names by the time they graduate.

Living in the Kernersville community, she sees them here and there in the years that follow. She fondly remembers the day she saw four police officers out in the community talking with each other. She recognized one of the officers as a former student. When he looked over and saw her, he nodded and smiled. She nodded and smiled.

She savors such moments.

And she values the colleagues who have become friends. If someone needs a hug, she offers to give them one.

Working in the front office at a high school calls for someone who can multi-task.

That is fine with her.

“I am a multi-tasker and I am darned good at it,” she said. “I like being in the middle of everything.’

Julie Nichols is one of the assistant principals at East Forsyth.

“Betty Ann knows this school inside and out!” Nichols said.

“People have no idea of all of the things a school secretary is responsible for, deals with and knows about! A popular saying around here is, ‘Ask Betty Ann.’"

“Betty Ann is cool as a cucumber when talking to difficult people on the phone. I am envious of her ability to stay calm and collected, polite and kind when people are extremely rude or hostile.”

“She is also very generous. She does special things for people on a regular basis who have no idea it was her that was so generous in giving. Betty Ann loves East Forsyth High School and the students who are on this campus!  And, she is an animal lover.”

“Betty Ann will not tell you ‘no’ when you ask for assistance.  She will stay late and she will take work home with her if she has a task that needs to be completed. She has a ‘No excuses’ mentality about getting things done.”

“She comes on Open House night and brings her husband to assist with answering families' questions about buses and they stay busy at her desk answering those questions! I've worked in large, public high schools for 23 years and she is the best I've ever worked with in running a front office. We will miss not having her around!  She is a kind soul and a hard worker and it will be very tough to replace her!”

Brandis grew up in Pulaski, Va., a small town where nobody bothered to lock their doors. Pulaski is about 15 miles from Virginia Tech, the university that she has always rooted for.

Brandis’ mother was 78 and had had four knee replacements by the time Brandis was able to convince her that she needed to stop working.

She was a wonderful mother, Brandis said.

“I give her all the credit for whatever I do right today.”

Growing up, Brandis participated in many sports.

The 800-meter race was her specialty.

Brandis headed off to Radford College (now Radford University) – which is about 15 miles from Pulaski – planning to become a teacher and to coach track.

Her life took a different turn after she married at the age of 20 while still in college and dropped out to work for a newly opened branch of his family’s jewelry business.

“I went to work with the mindset I was going to go back.”

After she divorced 8 years later, she and her young son moved. When Brad was 2½, she couldn’t find her son one day. When she stepped outside, she learned that he had marched into a neighbor’s house, opened the refrigerator, pulled out a two-liter bottle of Coke, and was drinking from the bottle.

It turned out that the neighbor – whose name was Keith Brandis – was quite nice. When some of her friends met him later, they wondered whether something could come of her getting to know him.

She didn’t see it going anywhere, she said. When he went to work each morning, he wore a suit, and she certainly didn’t see herself with a man who wore suits all the time.

Turns out, the suit man – who was putting on a suit to go to work for Volvo Trucks – was just the man for her. After two years, they married.

That was almost 35 years ago.

They came this way – by then they also had a second son named Ben – when Keith Brandis’ job brought him here. In Virginia, she worked in doctor’s offices, and, when they first moved to Kernersville in 1995, she went to work in a doctor’s office.

By then, Brad was in high school, and she first came to East Forsyth as a parent volunteer. She connected with the East Forsyth family, and, when a position as a secretary opened, Kurt Telford, who was the principal then, asked whether she would be interested.

In those days, Ben was in middle school at Kernersville Middle, and, after school, he would take the bus over to East Forsyth and walk down the hill to join his mother in the office. When Ben came to East Forsyth as a student, he joined the marching band. After playing clarinet, he eventually became the drum major.

“We were band parents,” she said.

If it was a football game, Brandis and her husband were sure to be there.  Their home became a favorite spot for band members to gather.  The years that Ben was a student and drum major at East were especially happy times.

For many years, she drove a blue Volkswagen Beetle to work.  Whenever the members of the German Club made a video, they often used it as a prop.

When they did that, the next time she got behind the wheel, she could count on discovering that, for fun, the students had changed the settings on the car radio from stations that played her music – country and ‘70s pop – to a station that played rap or something else that they knew would be of no interest to her.  It was all in the name of fun and she never tired of letting them borrow her bug.

Once she retires, one thing she knows for sure is she is going to do is take a nap whenever she feels like it. Her to-do list also includes taking a daily walk with her husband.

While she has been working, she usually makes a pie one day during the weekend. Now she can make one whenever she feels like it.

She knows she is also going to miss coming in each day and doing what she loves to do.

Stephanie Wallace, who teaches English II and Advanced Placement Language & Composition and who works with the Teacher Cadets, is the school system’s Teacher of the Year.

“Betty Ann is the staff mom, always ready to give a hug, a word of encouragement, or hold us accountable when needed,” Wallace said.

“She buys from our fundraisers (even stuff she's not supposed to eat), donates to our Donors Chooses, and slips cards/goodies in our boxes when times are tough. She works all day, often well beyond her required workday, but then comes to school events in the evenings to support her Eagles. She has driven all over the state to attend band competitions and football games for the Nest.”

“Betty Ann keeps that office running with grace. I've seen her get yelled at by students, parents, and community members over decisions that weren't hers to make. I remember working the main office phones and check out with her on 9/11, many snow days, and a couple of tornado afternoons.

“She calmly explains what the procedures are and why over and over again. I have worked with her for 21 years and have never seen her lose her temper despite the demands of angry folks.

“Betty Ann will always be an Eagle!”