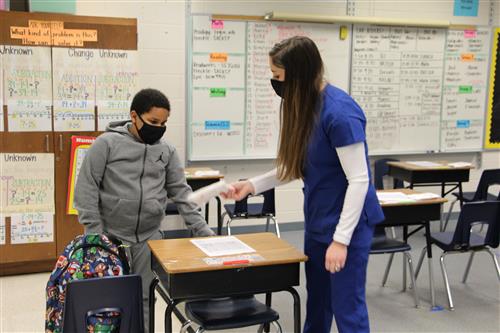 JANUARY 11, 2020 – Jaeden Colemen is a student in Katie Sacks’ second-grade class at South Fork Elementary. After starting the school year working remotely, Jaeden headed to the classroom for the first time this year on the morning of Monday Jan. 11.

Standing just outside her classroom door, Sacks greeted Jaeden warmly as he walked down the hall.

Both Sacks and Jaden were wearing masks. That was just what Yoda wanted. For her door, Sacks had created a sign with Yoda saying, “This Is the Way. Wear a Mask.”

After Jaeden came in, Sacks showed him to his desk and pointed out the chair sitting next to his desk. That was for him to put his backpack on, Sacks said.

Jaeden settled in. Asked how he felt about being there in person for the first time, he said, “I feel good.”

After a pause, he added, “Scared a little bit.” 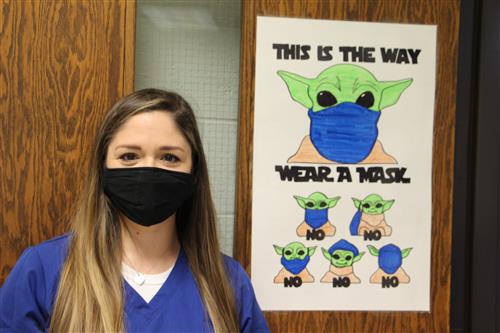 As other students came in, Sacks had something special to say for each of them. To Marcquise James, she said, ““Good morning, Marcquis. I am so excited to see you. You look so handsome. Did you get a haircut?”

When asked how he felt about being there, Marcquis expressed thoughts similar to Jaeden’s. Excited, he said, and “a little bit nervous.”

Asked what about what makes his teacher special, he said, “She is the best teacher.”

“I have a really good class,” Sacks said after Marcquis praised her.

“That makes my job so much more fun and easier.”

Sacks said that one of the hard things about the morning was not being able to hug her students as they came in.

Hugging students, she said, is “one of the best things in the world.”

In previous weeks, many students in Pre-K, kindergarten and first grade began coming back to Winston-Salem/Forsyth County elementary schools while others continued to learn remotely. 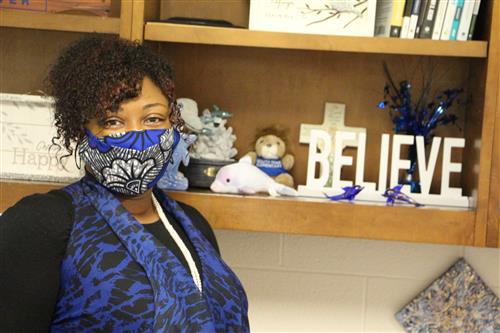 On Jan. 11, students in second and third grades and in sixth grade had the option to begin coming to school.

Like many of her students, she was both excited and nervous.

On the one hand, she loves spending time with her students in person. On the other, she worries about students coming back at a time when the coronavirus infection rate is so high in Forsyth.

At the same time, she is going to do all that she can to take care of them.

“While I don’t necessarily agree with the decision that was made," Sacks said, "I am trying to do the best I can to keep them safe and keep myself safe and make this a positive experience.”

Keeping everyone safe and making the experience as positive as possible was at the top of everyone’s list.

Dr. Raphael Green-Hughes is the principal at South Fork. As the day began, Green-Hughes had said that, when Pre-K, kindergarten and first-graders came back to school, students and their families had quickly learned such things as the importance of wearing a mask and maintaining social distance when lining up to go to the bathroom.

“The main thing was having a strong routine,” she said. “Once they were into the routine, it was very smooth.” 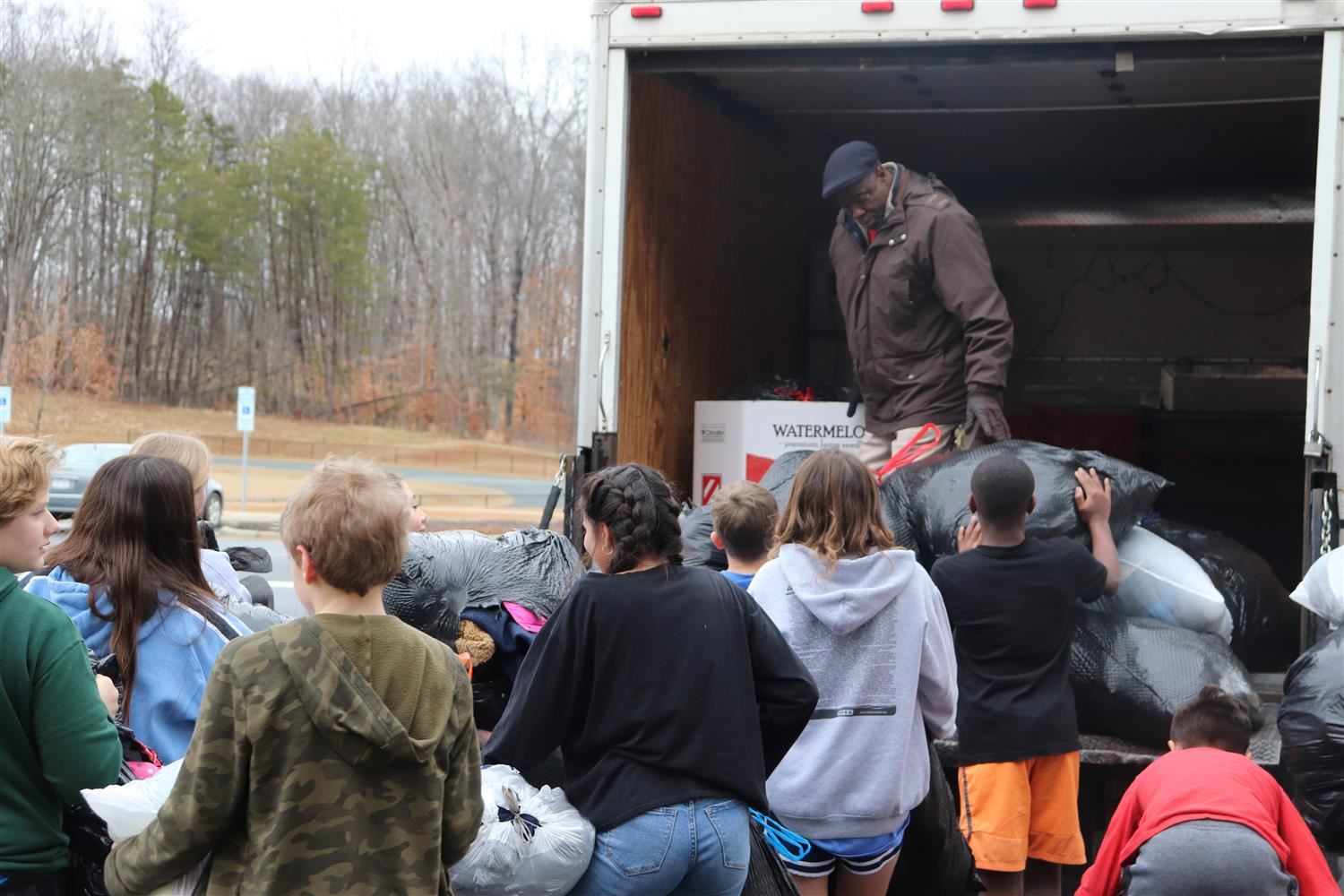 She was looking forward to the new round of students quickly adapting to the routine as well.

After students began learning remotely, Green-Hughes started “Talk Tuesday,” an online program on Zoom that enables parents to pick up valuable information and ask questions. With another group of students coming in on Monday morning, on Sunday night she held “Talk Tuesday: Special Addition” to fill parents in and answer their questions.

On Monday morning, Superintendent Tricia McManus sent members of her executive team to every school where new groups of students would be going. She personally was visiting four schools – Hanes Magnet Middle, South Fork, Philo-Hill Magnet Academy and Konnoak Elementary.

At her visit to South Fork, she talked about the importance of seeing that all of the safety measures were in place. She and other members of her team were also on the lookout for procedures that it would be good to tweak or add.

It was good to be in schools, McManus said. “It’s an honor to be amongst our teachers and our students,” she said.

And it was good to visit South Fork in particular, she said to Green-Hughes. “The morale and the culture here is incredible.”

As McManus was speaking in the gym, Joseph Gottfried, who teaches health and physical education, was waiting for a class of students to arrive.

After graduating from Parkland High in 2014, Gottfried headed to Winston-Salem State University. This is his first year as a teacher. So it has been quite a challenge.

“I do the best I can to make sure I keep the kids safe,” he said. “I feel pretty comfortable. I trust my principal. I trust my team.”

That sense of trust has enabled him to relax a bit as the school year has progressed.

Sacks, who began her career with WS/FC School at Forest Park, is in her fourth year teaching at South Fork. She has 21 students this year. From talking with parents, she expected about half of them to start coming into class and the rest to continue to learn remotely.

After everyone was settled, Sacks began going through the protocols. A mask had been set on each student’s desk in case they needed one – and for them to have to use later. All of the students who came into class were already wearing masks so they didn’t need it for the moment. 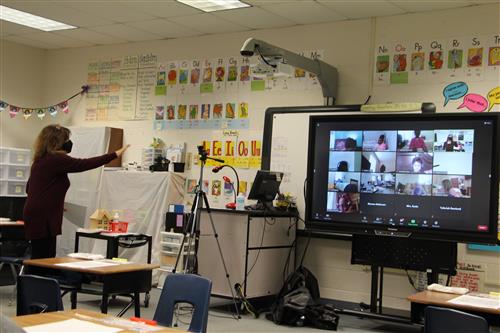 It was clear that they were quite familiar with other procedures as well. When she asked a question about social distancing or any other topic, a student had a ready answer.

Once all the safety protocols were taken care of, Sacks had students take a bathroom break before art teacher Leslee Monda came in to teach art.

Joining Monda was Ali Kapps, a University of North Carolina at Greensboto teacher who was starting her time as a student teacher. She and Monda go way back. Kapps attended South Fork from kindergarten through fifth grade, and Monda taught her art every year. Kapps went on to graduate from Reynolds High in 2006.

When they started art class with students both at home and in the classroom, Monda informed the students they were going to be working with some big words. The first was “architecture,” which they talked about before students went to work on designing and drawing a house. 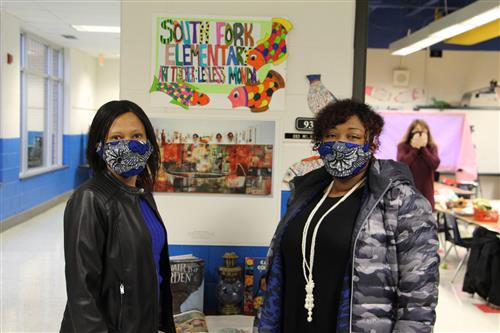 Sacks has known since first grade that she wanted to become a teacher one day.

“My first-grade teacher was my first inspiration,” she said. “She made me want to come to school every day. We had so much fun.”

Her first-grade teacher was Deborah Hamrick, and Sacks does her best each day to see that her students get the same loving attention.

Another source of inspiration for Sacks is her aunt Angie Sealey.

"She is the most positive person I know and I strive to be like her," Sacks said. "She’s always helped my class and my kids by chaperoning trips, donating, and being my emotional support."

Earlier, as students were still coming in and getting settled, asking students their favorite number, color and planned career was a fun way to connect.

Jaeden has a fluid favorite number. It’s whatever his age is. So this year, it’s 9. Last year, it was 8, and next year he fully expects it to be 10. His favorite color is stationary. It’s red because of his favorite pillow.

Marcquis’ favorite color is also red. For him, it’s because that’s Spider-Man’s main color. As for favorite number, he doesn’t have one. As a math whiz – which is how Sacks describes him – he likes them all.

Kelly Budam was among those who were both nervous and excited.

“I have been her in a really long time,” she said.

She was happy to be back with Sacks.

“She is really nice,” Kelly said.

Her favorite color is yellow. She wants to grow up to star in a TV show that has lots of action.

“Whatever she does, she will be great at it,” Sacks said. “She is a very smart girl and a very hard worker.”

Taylor Harden was one of the few in-school students not at least a wee bit nervous.

“Good!” she said when ask how she felt about being there. Asked whether she was nervous at all, she shook her head. 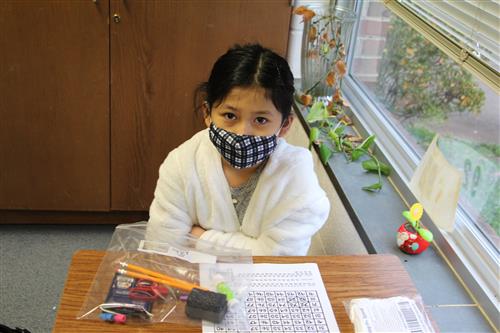 Taylor wants to become a nurse because it seems a fun and a good way to help people. Her favorite number is 1.

“Because I want to be back to be a baby.” 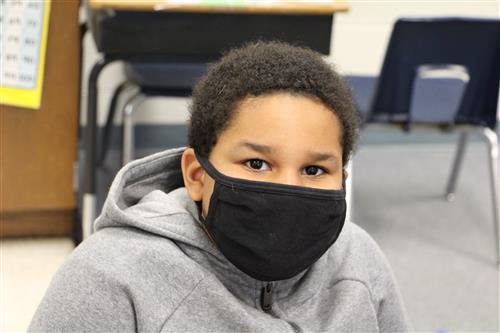