A Tale of Friendship & Hope

FEBRUARY 24, 2021 –Julie Hart and her brothers grew up listening to their parents tell stories about their lives.

“We loved listening to them,” said Hart, who teaches second grade at Union Cross Elementary.

Looking back as she got older, the stories came to mean even more to her.

One story her mother told dates from the days when polio presented a real danger for children. It was the summer of 1943 in Wilkes County. Elsewhere, World War II was raging.

Hart’s mother – whose first name was Jewel – was 12 at the time. On the other side of the creek lived Jewel’s close friend Claudine. Because of the possibility of being infected by polio, they couldn’t visit with each other in person.

The girls came up with a creative way to stay in touch by writing letters and leaving them by the creek for the other girl to pick up.

Jewel and Claudine remained good friends throughout their lives. Both died within a few months of each other at the age of 87.

Hart had long thought about putting some of her family’s stories down in writing, and, after her mother died, that was the story she decided to write first. She started working on the story about a year before the coronavirus turned everything upside down here and elsewhere. 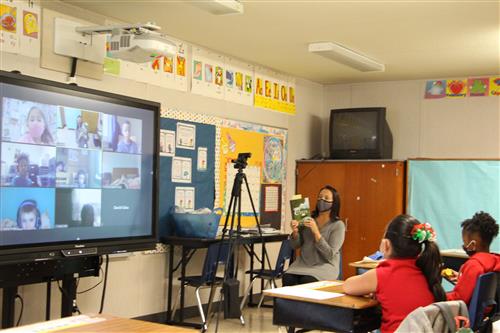 In the beginning, it was a straightforward story of the friendship. As Hart continued working on the story after coronavirus came along, she was struck by the parallels between those times and these times when staying in touch with friends can be a real challenge.

For Jewel and Claudine, everything had worked out, and, in Hart’s mind, the story of their friendship became a book that she hoped would bring a sense of hope in these trying times to those who read it.

She found an illustrator, Justin Branch. He is the son of a friend and attended Union Cross when he was growing up.

When everything was done, Hart submitted the book to a publisher.

Letters by the Creek is now out – it’s available on Amazon.com - and, in recent days, Hart has been reading chapters to her students and giving them the opportunity to share their thoughts.

Before reading a chapter on Monday Feb. 22, Hart and her students talked about some of the differences between those times and today when it comes to keeping in touch with people in your life. In those days, students pointed out, there were no cell phones to talk or text on, no Internet for sending emails.

Student Ellie Mazur said she does something similar to what Jewel and Claudine did – she sometimes leaves a note in a friend’s mailbox.

Hart’s students like listening to the book. Holden Gallison said, “One of my favorite parts of the book is when they start to send each other notes.”

Adults at Union Cross have also read the book, of course.

One of them is Principal Trish Spencer, who enjoyed listening to Hart tell stories in casual conversation before the book came along.

“Julie is an amazing storyteller,” Spencer said. “She must get it honest – when she speaks of her family and growing up, it is always in a story-telling fashion.”

“Her story is written the same way. I read it with Julie’s voice in my head and could picture those two young girls down by the creek passing letters through a jar. I found it really interesting to hear her mom’s perspective of the Polio Pandemic and Julie’s experience with our COVID-19 pandemic.”

“I imagine the isolation feels the same.”

“I am honored to have such a talented storyteller on our staff and I am grateful that she shares her stories with us and her students.”

“I have known Julie and her mother for many years and have worked with Julie for the last 17 of those years,” Chamelin said.

“Her mom was a wonderful lady and I always enjoyed being around her. She was a very sweet lady and had a wonderful sense of humor.”

“I recently read Julie's book and, while reading it, I realized that was the first time I'd read a book and actually knew the person it was written about. I thought that was neat!”

“The book is very relevant today since the events that take place in it are very much like what we have been going through this past year. It's message of hope that ‘yes, this too will pass and things will get back to normal’ is very uplifting.”

“I'm very proud of Julie for her accomplishment and hope this will be the first of many!”

Hart knows from personal experience how powerful words of hope and other gestures can be.

In 2014, she learned that she had breast cancer. People reaching out to her to let her know they cared and the small gifts of kindness they gave her along the way were quite powerful, she said. “Just a simple text to let me know they were praying for me would lift me up.”

“True friendships were so important.”

In writing the book, Hart wanted to use the real names of the people the characters are based on.  So she asked each person for permission. If the person was no longer alive, she asked the permission of family members.

In real life, Claudine’s little sister Midge had not gotten sick but, wanting to add to the drama of the story, Hart needed Midge to become sick. Claudine’s real sister gave permission for that as well.

Hart also added a couple of creative touches to her story such as the Mason jar that made a good place at the creek for the girls to deposit their letters.

She used the travel trailer parked behind their home as an informal office where she wrote the book. Hart and her husband, Greg, have three children from 15 to 25 years old and one granddaughter. Hart joked that it was only with the understanding of her granddaughter, who was not yet 2 at the time, that she was able to complete the story.

This is the first book that Justin Branch has illustrated. He was delighted to participate in the project, he said.

“I participated in this project because Julie is a dear family friend and I cherished the idea of being a part of telling her mom’s story!”

“I got great insight into Jewel and her childhood. I enjoyed the challenge of bringing these memories to life through illustrations.”

For Joyce Branch, the first word that came to her mind when asked what makes Hart special as a person was “compassionate.”

“My heart will always belong to Union Cross,” she said. “It was a family.”

Her son has always been an artist. She remembers him drawing when he was 2, and, when he was in high school, a local business bought one of his pictures for the office. His art comes from his heart, she said.

Joyce Branch was delighted when she learned that two of the most special people in her life were working together.

The first word that came to Joyce Branch’s mind when asked what makes Hart special as a person was “compassionate.”

Joyce Branch, who is now retired, loved working there.

“My heart will always belong to Union Cross,” she said. “It was a family.”

Her son has always been an artist. She remembers him drawing when he was 2, and, when he was in high school, a local business bought one of his pictures for the office. His art comes from his heart, she said.

Her son went to Union Cross and, over the years, he and Hart have kept up.

Joyce Branch was delighted when she learned that two of the most special people in her life were working together. 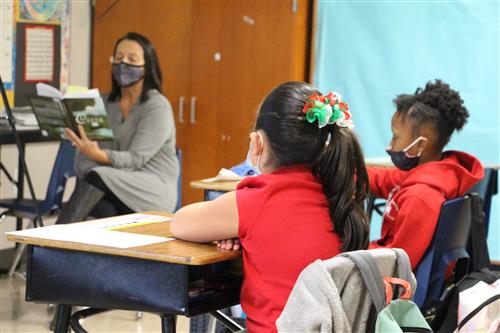 Hart, who has been teaching for 32 years, leads a rich life.

The family goes to New Friendship Baptist on Old Lexington Road near the Davidson County line.

When Hart was younger, she also sang in an all-women’s group. As the women married and had children, the group disbanded. They came back together for a night in 2015 when Hart was invited to testify about coming out the other side of breast cancer.

Feeling a little nervous about simply testifying, she wanted to testify and sing, and her friends were happy to join her in singing.

And, yes, she does envision more books.

Keep an eye out for Tales from Blackburn Hollow.