Hands-On Experience with an Ambulance for North Forsyth EMT Students 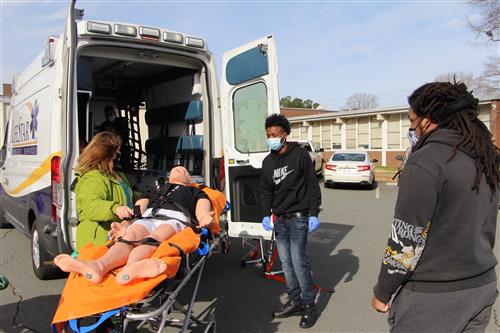 MARCH 3, 2021 – It was going to be a big day for students in Tonya Scott’s EMT class at North Forsyth High.

In a little while, Paramedic Todd Holderfield of LifeStar Emergency Services would be bringing an ambulance to the campus so that students could have such hands-on experiences as putting someone on a stretcher into and out of an ambulance.

Ready to do his part when the ambulance arrived was a manikin named Rescue Randy. At the moment, Randy – who weighs 220 pounds so students would be able to get a sense of what it’s like to take care of a real person – was on a stretcher at front of the classroom.

The morning would also include learning more about working with an oxygen tank, the ambulance’s radio and such. Scott said she hoped the experiences would help give students a better sense of what it’s like to work on an ambulance. 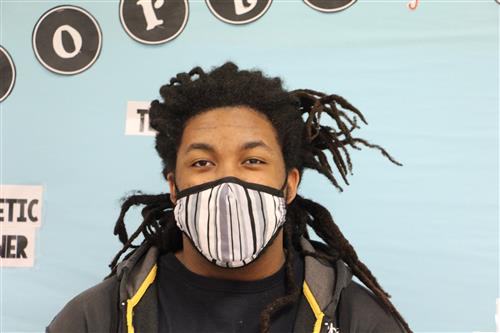 It was Tuesday March 2. One of the students awaiting the arrival of the ambulance was Timothy King, who plans to pursue a career as an EMT (Emergency Medical Technician). His reason for wanting to become an EMT are straightforward.

“I have always liked helping people out, and I wanted to do some more of it,” King said. “I want to help save some lives.”

Fellow student Jose Alonzo-Vico also plans to become an EMT because of “everything they do going out taking care of people – all kinds of people.”

Alonzo-Vico has known since he was in third grade at Old Town Elementary that he wanted a career in the medical field, and, back in 2018, he joined the Forsyth County EMS Explorers, a program that allows those aged 14-21 to get a feel for careers in emergency medicine, firefighting and health care. That gave him such experiences as learning CPR (Cardio-Pulmonary Resuscitation).

Since starting the EMT program taught by Scott at North, he has learned much more. 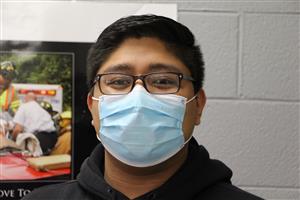 “I feel very lucky and fortunate to have Ms. Scott as a teacher,” Alonzo-Vico said. “She has many years of experience. She knows the material, and she works hard with us.”

“I am very proud to attend North High.”

“She works hard to incorporate all of these magnet programs,” he said.

Since establishing the NAF Academy of Health Sciences at North Forsyth, the school has become a magnet school with a focus on health sciences. New programs are added regularly.

This is the first year the EMT program has been offered by the NAF Academy. Scott, who has been a paramedic for 20 years – she currently serves with Stokes County Emergency Medical Services - was already teaching EMT courses at Walkertown High. 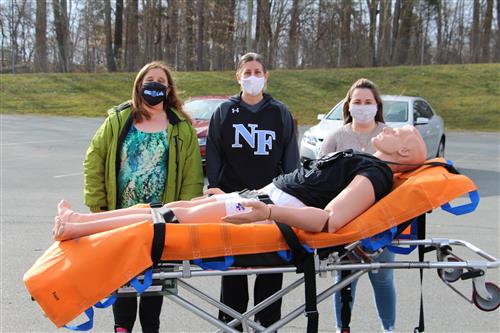 Some of the other students are not sure that they want to become an EMT.

Alondra Ventura know that she wants a career in the medical field but she doesn’t yet know whether she will become an EMT or pursue another career, such as nursing.

What she does know if that she likes the hands-on approach that Scott takes in the class.

Tramond Cobb wants to be an entrepreneur. As he sees it, the skills he learns in the class will serve him no matter what he does.

Adrian Perez also thought the class would be interesting, and it has been.

When it was time for Holderfield to arrive with the ambulance, Scott and the students headed out with Wise and Cailie Hildreth who serves as the NAF Academy coordinator.

As students gathered around the back of the ambulance, Holder, who works as a Training Officer for LifeStar, filled them in on the world in which he works.

The ambulance he brought is not generally used for emergencies. If, say someone who lives in a nursing home needed to be admitted to the hospital, the ambulance would take them there and then back to the nursing home after the person was discharged. 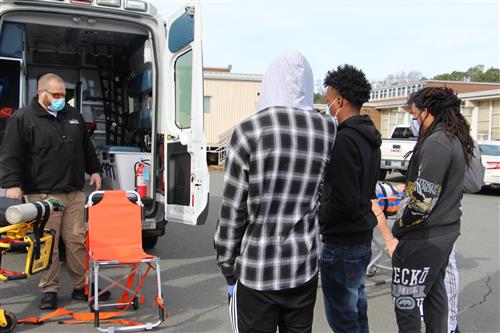 After everyone was oriented, the students divided into two groups so that Holderfield could take one group to the cab to show them about using such equipment as the radio while Scott worked with a smaller group with Randy and the stretcher.

Holderfield said he was happy to be able to give hands-on experiences.

“It gives them the practice, and they can see how it’s done in the real world,” he said.