"A Perfect Example of Someone Who Leads with Integrity" 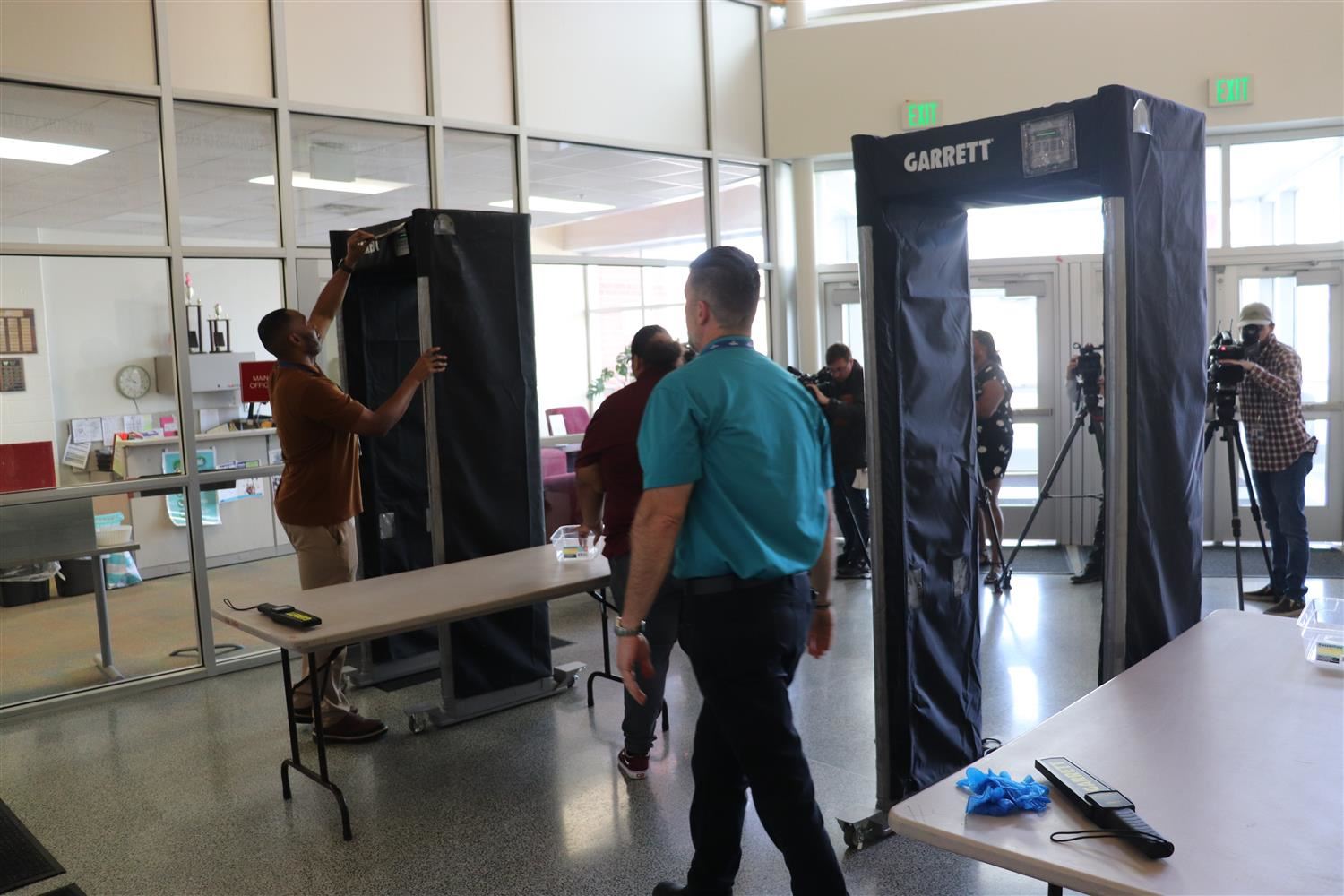 APRIL 16, 2021 – As the assistant principal at Old Town Elementary, Charlie Wall works to connect with each student as a person.

“I treat them with respect and love,” Wall said.

“His way with them is just perfect,” said Principal Debra Gladstone.

Wall has been the principal at Old Town since 2009.

People in the community know the work that everyone on the staff at Old Town puts into serving the students, Wall said, and they appreciate it. 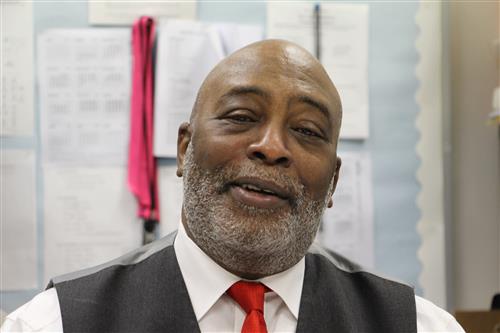 Since Gladstone came to the school as principal in March 2020, she has found Wall’s assistance and support invaluable.

“Charlie Wall has been my right-hand person in this transition,” Gladstone said.

Right away, he was able to give her a good sense of the culture and climate of the school.

“That was very beneficial in moving us forward and supporting the social and emotional and academic needs of our students,” she said.

And since the arrival of the challenges brought by the coronavirus pandemic, she has found his guidance and advice extremely helpful.

And she appreciates him as a person.

“Charlie Wall is a perfect example of someone who leads with integrity,” Gladstone said. “He is very approachable.”

And able to go with the flow. 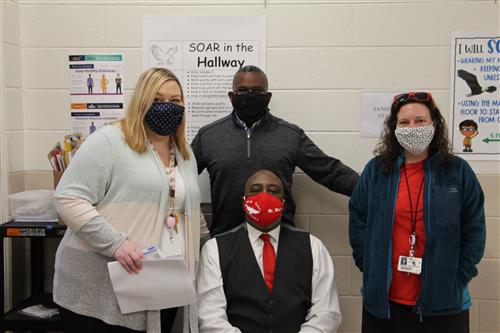 Jenny Wallace is the MTSS (Multi-Tiered System of Support) Coordinator at Old Town.

With Wall being the only man on the school’s senior team, she said, conversation at senior staff meetings may drift to such topics as pregnancy. She appreciates his ability to go with it.

And, anyone who spends any time with him soon learns he can be quite funny.

Wall grew up in Clayton, a town to the southeast of Raleigh with a population of 3,500 or so. There were 11 children in his family. As No. 6, he was smack-dab in the middle. His mother, Alice, worked in a school cafeteria, and his father, Wade, was a custodian at N.C. State University.

Wall headed off to the University of North Carolina at Chapel Hill with no plans to go into education. After he graduated from Carolina in 1978 with a degree in political science, he went into the retail business. He came to the area as the manager of a Roses store.

He later went to work for RJR Nabisco. 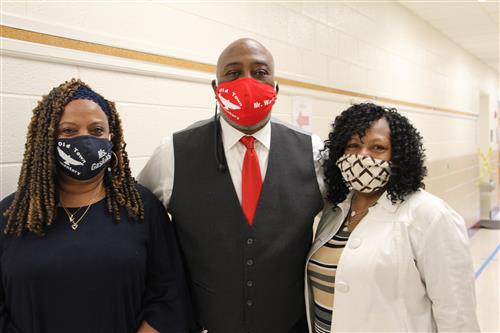 Along the way, he did become a teacher. Wall and his family go to First Baptist Church on Highland Avenue and, after teaching Sunday School and working with the church’s youth group, he began thinking about teaching in schools as next step in life.

“I had to make a decision about what I wanted to do for the rest of my life,” he said.

After working as a substitute teacher for a time, he became the Home/School Coordinator at Ibraham Elementary and enrolled in Salem College to earn his master’s degree in education.

Although he liked his responsibilities at Ibraham, it was time to formally become a teacher, and, after earning his master’s degree in 2005, he taught kindergarten and first grade at Meadowlark Elementary for four years.

He later earned a post-master’s Certificate in School Administration rom the University of North Carolina at Greensboro, and his Education Specialist (EdS) degree from Gardner-Webb University.

He was interested in becoming an assistant principal in part because he liked the idea of interacting with all of the students at the school rather than focusing on the students in a single classroom. 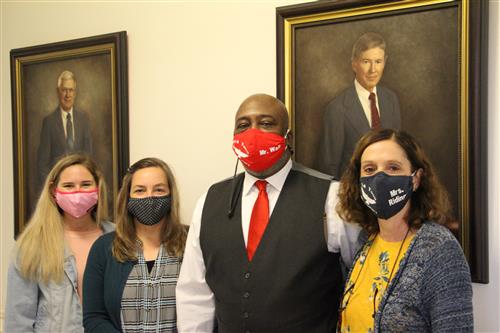 In 2009, he applied to become the assistant principal at Old Town. Like Ibraham, it was a school where a high percentage of students came from families with economic challenges.

“I knew where I was needed,” he said.

“He brought a wealth of knowledge regarding educating young children when he joined the Old Town family as he was a kindergarten teacher.”

“Charlie comes to work every day with a smile on his face.  His positive attitude is contagious.  He also strives to build personal relationships with the students and staff at school.  It has been almost 10 years since I left Old Town, and he never fails to ask about my family when we see one another. “ 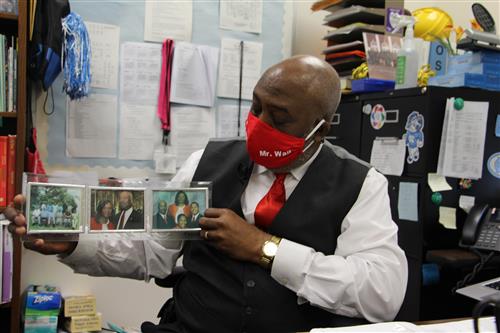 “It was an honor to work with Charlie and our district is fortunate to have him serve as school administrator.”

As the assistant principal at Old Town, Wall has such official duties as working with the buses and discipline.

As he sees it, his overriding responsibility is “to assist the principal in a successful running of the school.”

“My first priority is academics.”

At Old Town, he said, everyone works together as a team, and he likes that.

He also likes that each day is different. Driving to school, he may have a mental list of plans for the day. He knows that some things on that list – say, an interview with someone interested in working at Old Town – will definitely happen. Other things on the list might be replaced by whatever come s up.

A 12-hour day is not uncommon. 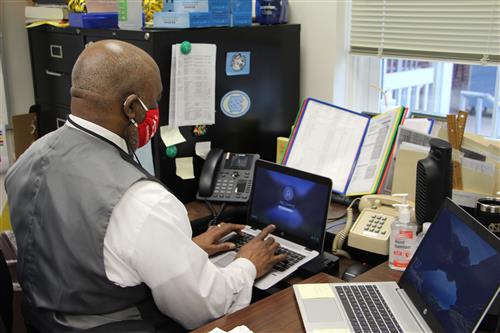 “I try to make sure all my phone calls are returned before I leave the building.”

And he may work on a Saturday.

“They know I will get in and do what needs to be done,” Wall said.

Old Town is an Inspire 340 school. He was at Old Town on the Saturday Inspire 340 had its virtual career fair and he will be there for the district’s Virtual Career Fair on April 17.

During a regular school day, Wall makes a makes a point to be as visible as possible in the halls and classrooms so the students can visit with him.

Wall’s wife, Janet, is officially retired as a career at a speech pathologist. She continues to serve students, though, and, as it happens, she is working at Old Town at present as a long-term sub. 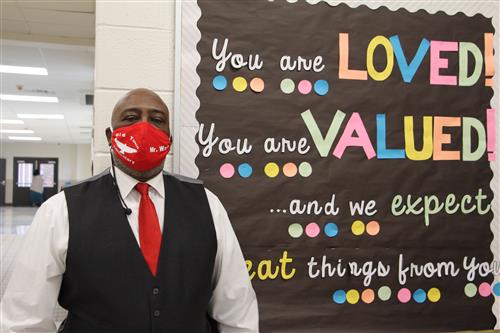 Forty years ago, Wall fell in love with her despite the fact that he is a Carolina man and she is a University of Virginia woman. They have now been married for going on 39 years.

Their children – Denise and David – are twins. At one time, Denise, was an EC (Exceptional Children) teacher at Meadowlark Elementary. These days, she teaches at the state level as an EC teacher working with students virtually.

Wall is quite active in his church. He is the chair of Deacon board, superintendent of the Sunday School and a member of the church’s board of trustees.

He also enjoys spending time with his immediate family and wider family. Most of his siblings still live in the Raleigh area.

One of hardest periods of his life was when his youngest sibling, his oldest sibling and his mother all died within a few months of each other in 2018.

When Wall picks up a book to read for pleasure, it’s likely to be an autobiography because he likes learning how someone came to be the person they are. 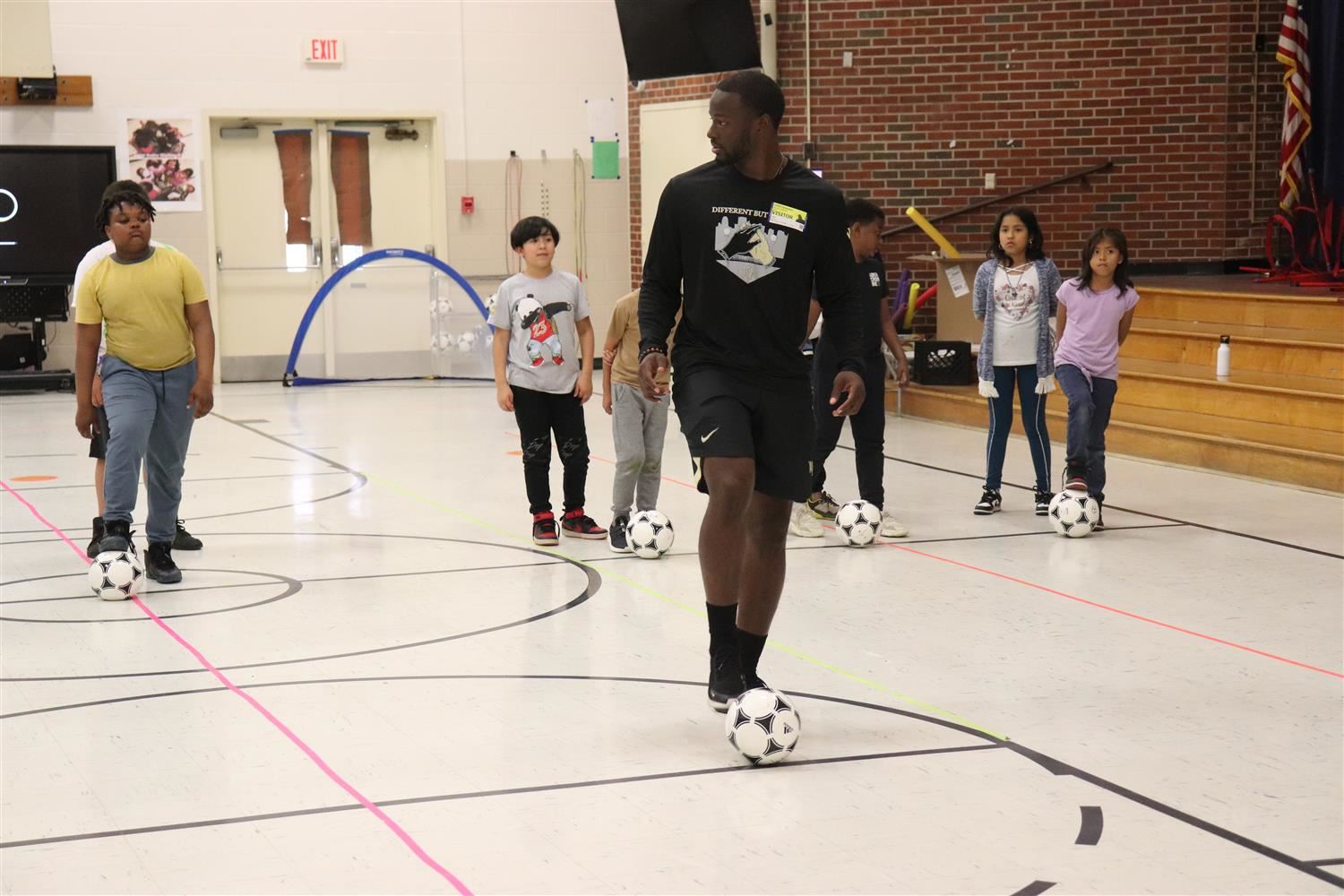 And, yes, he has considered writing his own autobiography. Asked whether he had a title in mind, he stopped for a minute to give it some thought and then said he could see naming it All of Us.

For him, that speaks to the connections among his family and everyone else close to him.

You can learn a lot about Wall sitting in his office. On one wall is a photo of Earl Lloyd, the first Black player in the NBA. After he and Wall met and became friends, Lloyd gave Wall a pair of shoes he had worn while playing in the NBA. Wall keeps one shoe on a shelf in his office and the other at home.

The photos in his office include pictures of him when he was young that he may point out to a student.

“I let them know I was once a child,” he said

Along those pictures and photos of his family, his office includes such items as an etching that a former student made for him. He attended her college graduation.

“I do stay connected with some of the students I had,” he said.

Mary James is the Instructional Facilitator at Old Town.

“Mr. Wall is such an asset to Old Town,” James said.

“He is a team player and is always dependable. He communicates well with others and has a calming presence in stressful situations.”

“He takes the time to get to know the staff members and students and develop relationships that support student proficiency and growth.”

“Mr. Wall has a gift for working with others and we are so fortunate to have him helping to lead us at Old Town.”