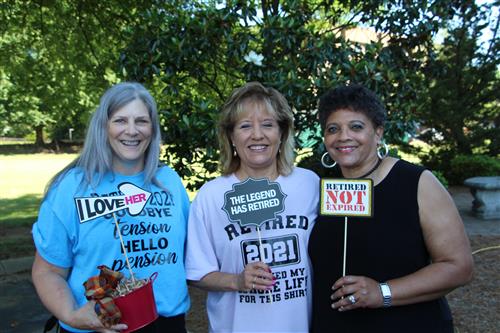 JUNE 16, 2021 – The Three Musketeers dropped by the WS/FCS Retirement Breakfast.

For many years, Cindy Mullins, Mary Shackleford and Sherri Miller worked together at Walkertown Elementary. They thoroughly enjoyed working together, and Mullins referred to them as the Three Musketeers at the retirement breakfast held in the parking lot outside of Central Office on the morning of June 16.

Mullins has served as a kindergarten assistant at Walkertown Elementary for 25 years or, more precisely, she joked, for 25.57 years.

Asked why she is retiring, Mullins said, “It’s time.”

“I love what I was doing,” said Shackleford, who has served the school system for 21 years as an Exceptional Children (EC) teacher assistant, first at Walkertown Elementary and then at Walkertown High.

“You just know,” said Miller, who has been a kindergarten assistant at Walkertown Elementary for 21 years.

All three have a list of things they’re looking forward to doing. At the top of Shackleford’s list is spending time with her first grandchild, who is on the way. Mullins is excited about being able to work more in her garden. Miller, who lost her husband recently, is heading West with a cousin. Planned stops include Colorado, Utah, Arizona and South Dakota, one of only two states her cousin has never visited.

About 75 people – some who have already retired and some who will retire shortly – came to the celebration.

After 35 years of teaching third grade – most recently at Ward Elementary – Ramona King is ready to volunteer at her church, Mount Zion Baptist Church, to travel to see family in Maryland and elsewhere, and to do nothing. She would enjoy taking another Mediterranean cruise one day as well.

After staring her teaching career in 1979, Giszelle Jones joined Winston-Salem/Forsyth County Schools in 1997 and has been an ESL (English as a Second Language) teacher at such elementary schools as Diggs-Latham and Vienna.

It’s been a rewarding life.

She plans on taking art classes, paddle boarding on the lake by her house, and continuing to work as a master gardener at the Emily Allen Wildflower Preserve.

At the celebration, retirees had the opportunity to visit with Superintendent Tricia McManus, as well as such school board members at Malishai Woodbury, Dana Caudill Jones, Marilyn Parker, Elisabeth Motsinger, Leah Crowley and Deanna Kaplan.

They could also find out more about Winston-Salem/Forsyth County Retired School Personnel, which supports schools in such ways as providing volunteer tutors.

At the organization’s tent, Pam Schmal, a Senior Human Resources Specialist, set up tiny buses to alert retirees in a fun way that they could always drive a bus if they wanted.

After a six-month break, retirees can also teach part-time and take on other responsibilities.

Asked whether she had any advice for new retirees, Mary Billingsley, who retired in 2015 after teaching for 32 years, had a ready answer: “Get involved in volunteer work.”

She certainly follows her own advice. She is an active with the West Davidson Food Pantry, a homeless ministry and her church, Centenary United Methodist in Clemmons.

Member Harry Morley, who is retired from Wiley Magnet Middle in February, is still in the relaxing mode.

His advice was “enjoy the time” and “go travel.”

When the formal program began, Yvonne Williams, the president of Retired School Personnel, spoke, as did Karel Chandler of the Educator Warehouse, Jevelyn Bonner-Reed, the Chief Human Resources Officer, and Superintendent McManus.

“There is no greater calling than what we are doing as educators,” McManus said.

And, in serving students at a time with so many challenges since last year, she said, “you did it with such grace.”

In between speakers, Bonner-Reed and Shaterika Parks, the Director of Employee Recruitment and Retention, would draw names and award gift cards and other treats donated by local businesses and organization.

By no means did all of the retirees at the celebration work in schools. Based in Central Office, Marie Larson has been serving as an Early Learning Coach.

“I would love to work in a school,” Larson said.

Perhaps helping a student with reading.

After Rick Rule retired from his job as an electrician with the school system in December, he immediately began working with a friend on a project. That’s coming to a close and he’s looking forward to doing nothing as soon as possible. 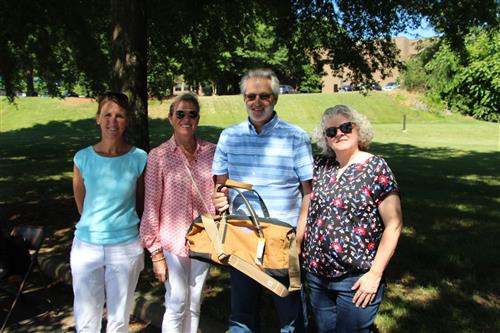 Some of the retirees are products of the school system. Janet Somers, who has been a data specialist in Equity and Accountability Office, graduated from Parkland High in 1975. She’s looking forward to spending time with her four grandchildren and becoming even more active in her church – College Park Baptist.

Thomas Hinton had a career as an engineer and designer for IBM and the co-owner of a school of performing arts before becoming an eighth-grade math teacher at Wiley Magnet Middle. Along with playing piano and keyboard, he does a little composing and he is looking forward to spending more time with his music.

“I have the time now,” Hinton said.