To see the video that Bailey Reeves created, go to YouTube. 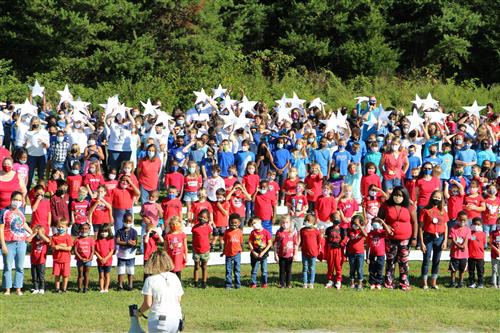 SEPTEMBER 10, 2021 – As a way to commemorate 9/11, Principal Angela Reeves and other staff members at Sedge Garden Elementary decided to have students and staff create a giant American flag on a field outside the school on the morning of Friday Sept 10.

They did so by having students in certain grades wear red to school. Students in other grades wore blue. Teachers wore white and would hold up white stars cut out of white paper.

It was a valuable experience for everyone, staff members said.

“I think it’s really important to show the importance of being a patriot,” said teacher Courtney Draper.

And it’s important to honor those who made great sacrifices in saving others that day, said Megan Houston, the Instructional Facilitaor.

“Because of that heroism, they saved a lot of lives.”

We have such people to thank for many of the freedoms we have today, she said.

After the flag was created, everyone joined together in saying the Pledge of Allegiance.