A Wall of Guitars at East Forsyth High 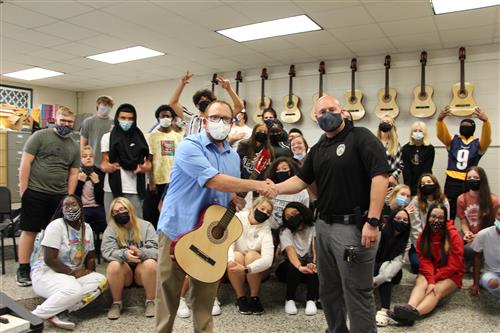 They are a valuable teaching tool.

Some years back, he started keeping an eye out for used guitars that he could pick up at a yard sale or somewhere else.

A chorus class might have as many as 40 students. If he had half that many guitars, two students could work together on one guitar. So his goal was to come up with about 20 guitars.

Five years ago, as a way to declare that goal, he bought hooks to hold guitars and installed them on one wall of his classroom. As he acquired a guitar here and there, he would hang it up.

Now thanks to the Kernersville Police Department’s Community Engagement Team – and to the Amazon Fulfillment Center in Knernersville – the rack has enough guitars to fill the wall. 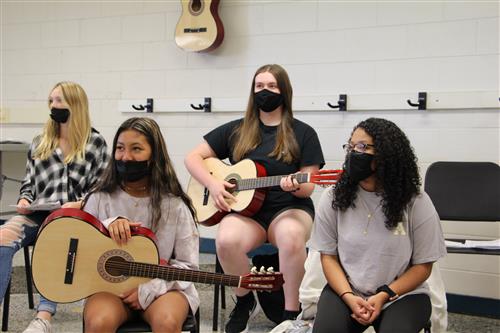 From time to time, the Amazon Fulfillment Center in Kernersville lets the police department know that it has items to donate if there is a need, said Sgt. Frank Sanchez. When he learned that the fulfillment center had a dozen guitars available, he spoke with Officer James Deeney.

Deeney already knew that Brady was looking for guitars and the connection was made.

When Deeney asked Brady how many guitars he could use, Brady said, “As many as you’ve got.”

So the Kernerville Police gave them all of the available guitars.

Asked how he feels about now having a guitar for every hook, Brady said, “Overjoyed!”

Rusty Hall is the principal of East Forsyth High.

“It is so great to have amazing partners in our community that are part of the family at East Forsyth High,” Hall said. 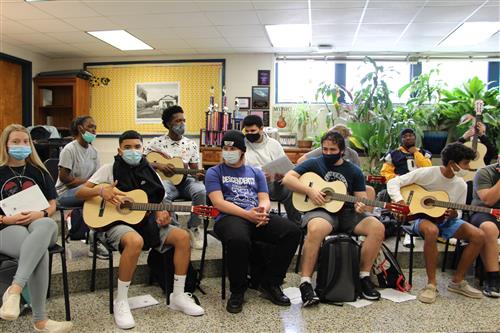 “This extended family has come through again by providing this amazing opportunity for our students. It is so important for students to not only grow academically, but for them to explore and find their passions. Support like this will no doubt support our students in achieving both academic and personal growth.”

Brady’s goal is not to have all of his students become proficient guitar players. His goal is for them to learn some chords and other basics so they can provide themselves with some accompaniment while they sing the melody.

Being able to do that can be quite helpful in mastering a song, he said.

“They will feel more accomplished as a solo singer if they can accompany themselves.”

And having that skill greatly increases the chance that they will continue to sing after graduating from high school.

“To be able to offer my students the opportunity to have hands-on instruction with an instrument can create a life-long musician,” he said. 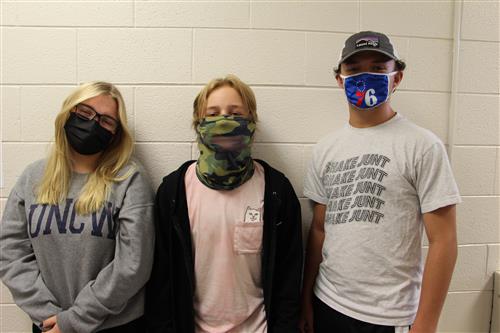 “Creating a life-long musician is always the goal.”

The guitars were delivered recently, and, when chorus students began using them in class on Thursday Sept. 9, Brady had not yet had a chance to tune all of them. So he had students take a conservative approach as they handled them.

“Don’t strum it because it’s not tuned,” he said.

They got to know the guitars in other ways.

During a break, students said they were delighted to have the guitars.

“I’m really grateful,” said Emerie Hilton, who is a sophomore at East Forsyth. “I have always been a musical kind of person.”

Sophomore Carson Lewis, who plays guitar at home, said “It’s good to think we can do that in the classroom now and not just at home.”

“Thanks for the gift and the opportunity.” 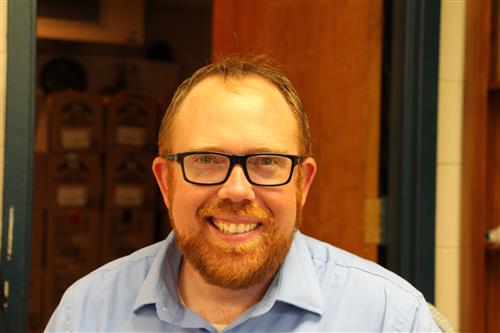 Senior Dane Maggard said, “Music has always been a big part of my life.”

Although he plays other instruments, he has not yet learned to play the guitar.

“I’m glad to have the opportunity to learn a new instrument,” Maggard said.

Brady’s life is filled with music. His wife, Ashley, teaches chorus in Davidson County, and her mother, Carol Earnhardt, is the chorus teacher at Glenn High, where both Ashley and Roman Brady went to high school.

Brady sings with the Heart of the Triad Choral Society and leads the music program at his church, Trinity Moravian.

The Amazon Fulfillment Center has enabled the Kernersville Police to help others in the community as well, Sanchez said. Earlier, he said, the fulfillment center donated more than 800 pounds of children’s toys that the department distributed.