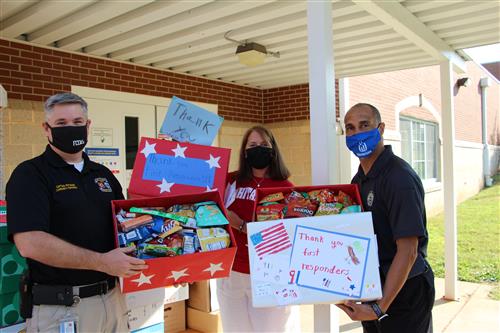 SEPTEMBER 15, 2021 – To thank first responders and essential workers for all they do, students at Whitaker Elementary School held a “Snack Drive for First Responders and Essential Workers.”

They collected snacks and decorated many of the boxes the snacks would be going on. Third-graders, who were sponsoring the drive, also made signs expressing their appreciation.

The snack drive was sponsored by the Third Grade and Enriching Minds classes, and the schools’ 100 or third-graders were there to greet them in the bus lot behind the school. Many were holding up the signs they had made. 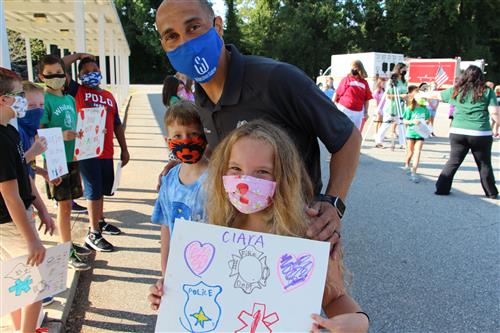 Students were delighted to be there, said Jessica Hurst, who teaches third grade.

“They were so excited,” Hurst said.

Several boys in her class talked about why they thought it was an important project.

“I think it’s great because we are giving the snacks to first responders and honoring them,” said Nathan Harris.

Max Holshouser, who is thinking about becoming a police officer one day, also think thinks it’s important to thank first responders “for all the hard work they do.”

“We can share and help the first responders,” said Shields Abney, who is also thinking about becoming a police officer one day.

“I like caring for the first responders,” said Deacon Stroud.

Educators also thought it was a great project. 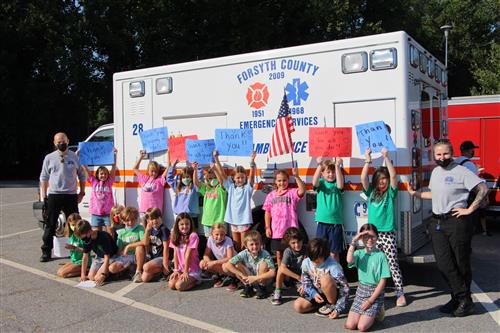 Teacher Darcy Steele said it was a good way “to show our appreciation for those who do so much for us.”

“It’s very important for kids to see how they can help to make a difference,” said teacher assistant Kim Spencer.

When Officer K. Ukuzato of the Winston-Salem Police arrived, she visited with some of the students.

“The kids are all amazing,” she said. “I just love the kids.”

“They are our future.”

When it was time for the formal presentation, several students stood between the American flag and North Carolina flag and spoke.

“We wanted you to know you are appreciated,” said one student.

“We thank you for keeping us safe,” said another student.

After that, students had the opportunity to check out a fire truck and other vehicles used by first responders up close. 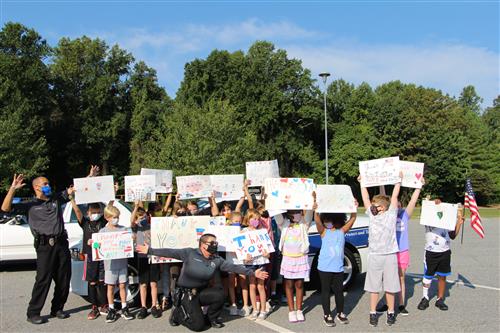 Students throughout the school participated in the snack drive, which had been held the week before. Students had also made cards thanking the community helpers for their ongoing support, and cards had been placed in many of the boxes.

Earlier in the morning, as the time approached for the event, Melissa Owens, who is the Day Porter at Whitaker, moved the boxes of snacks outside into the bus lot and set up the American flag and a North Carolina flag.

When Officer V.C. Costner of the Winston-Salem Police arrived, he said that he appreciated what the students were doing.

“The fact that some child respects what we do and honors it, I love it,” Costner said.

He was also looking forward to spending time with young people, something he enjoys doing when he gets the chance.

Capt. Matthew Motsinger with the Forsyth County EMS has two sons at Whitaker and, when he arrived, they were invited to come out and say hello. Sawyer is in fifth grade, and Sullivan is in kindergarten. 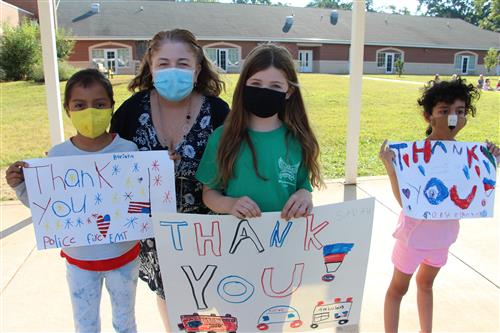 Suzanne Sarfert, who is an AIG Catalyst/Specialist Teacher, organized the drive.

“It was a group school effort,” Sarfert said. “Everyone pulled together to support our community’s first responders and essential works.”

In addition to honoring the first responders and essential workers, the drive was a valuable learning experience for third-graders, said Principal Sharon Creasy.

As part of the third-grade curriculum, they are learning about the importance of contributing to the community and serving as leaders.

“We are all leaders,” Creasy said.