Reading Warriors volunteers will be trained in the program before they began working with students. For more information about volunteering for the Reading Warriors program, go to Volunteer. 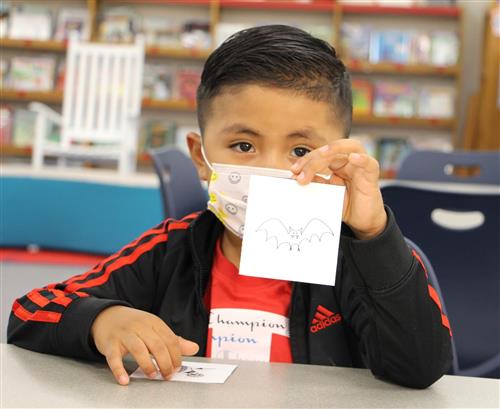 As Barber pointed at each picture, she said, “Cat. Bat. Jug. Hat.”

Which word does not rhyme with the others? she asked Matteo.

He correctly identified “jug” as the word that didn’t belong.

Winston-Salem/Forsyth County Schools is in the process of launching Reading Warriors, a new program in which trained volunteers work with students in kindergarten and first grade as they learn to read. The work that Matteo and Barber did together were examples of some of the learning exercises volunteers would do with a kindergarten student. 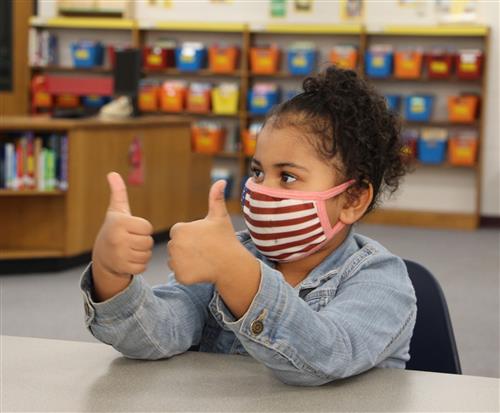 At another table, Jeanie Wilson was doing first-grade exercises with first-grader Marlee Mercer.

The exercises including having Marlee give Wilson a thumbs up if two words rhymed and a thumbs down if they didn’t.

“Bake” and “cake” were definitely a thumbs up.

“You are so bright,” Wilson said to Marlee after they finished the exercises.

Each volunteer will need to commit only to one hour a week, said Dr. Paula Wilkins, who, as the Executive Director of Project Impact, oversees the Reading Warriors program.

The Reading Warriors program is one tool the school system is using to reach its goal of “90 by ’25” – that is 90 percent of third-graders testing as proficient readers by the end of the 2024-25 school year. 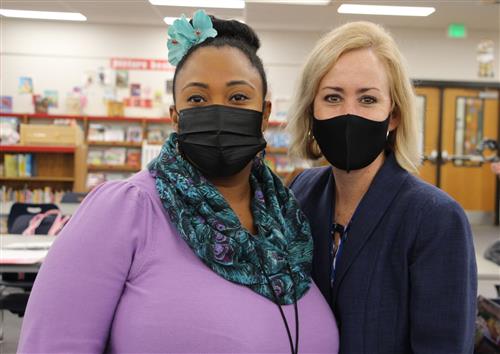 On the morning of Friday Sept. 17, Wilkins sat down with Superintendent Tricia McManus in the media center at Old Town to talk about “90 by ‘25” and how the Reading Warriors program will support reaching that goal.

“I am so excited about this goal,” McManus said.

In the 2024-25 school year, the students who are in kindergarten today will be in third grade, McManus said.

“They will be proficient in reading.”

“The goal is based on the research that 95 percent of students should be able to read by third grade unless they have – maybe 5 percent have – severe cognitive delays that could get in the way of that.”

“So we do think this 90 percent goal is attainable.”

“We have a lot of plans for how to make that attainable.”

Day-to-day instruction in the classroom is integral to attaining that goal.

“The Warrior program adds another layer of support for students,” McManus said. 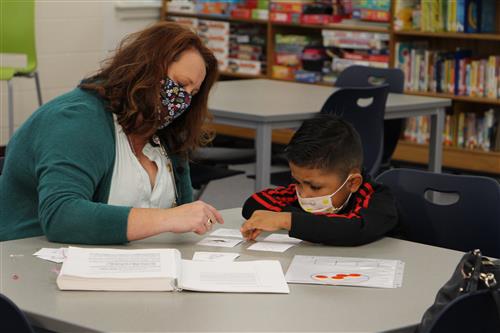 Bringing in volunteers to work with students provides extra time for students to focus on mastering important literacy skills.

When Wilkins asked McManus why people should sign up as volunteers, McManus said that people she talks to in the community want to make a difference and want to help students be successful.

Working as a Reading Warriors volunteer is an excellent way to do that.

“It is one hour a week at a time to change a life forever,” McManus said.

“People who want to make a difference and want to have an impact, this is the way to do it.”

To become a volunteer, people interested in working with the program need to apply with to the school system.

“We are happy to assist in the recruitment efforts for the Project Impact Reading Warrior program,” said Jenny Scholl, the Volunteer Coordinator for Winston-Salem/Forsyth County Schools.

“Our scholars need volunteers who are dedicated and ready to dig in with them – making their success a priority.”

Easton Elementary is one of the schools where Reading Warriors volunteers will be helping students.

“I’m excited,” said Principal Ramona Warren. “That will give children more one-on-one support for skills they are lacking.”

Warren already knows how valuable such a program can be. Volunteer tutors working with the Augustine Literacy Project have come to schools where she has been principal.

They were extremely helpful, she said, so she is looking forward to having Reading Warriors volunteers come to Easton.

“I think it’s going to help the children to build the foundational skills.”

Warren also saw how much it meant for each student to have an adult who was committed to coming into the school to serve the student.

So, in addition to the tutoring program itself, the connections that Easton students make with Reading Warriors volunteers will mean a lot.

“To build a relationship will show that child they have value,” Warren said. “Having volunteers come in can be vital.”

Asked how many Reading Warriors volunteers she would like to have, Warren smiled and said, “I will take as many volunteers as will come to Easton.”

With the subject being reading, asking Warren her favorite letter and favorite word was a natural step.

She likes all letters, Warren said. If she had to pick one, it would be “H” because that is the first letter in her son Hunter’s name. Coming up with her favorite word was easy. It’s “cat.”

“You can go all different directions with ‘cat,’” she said.

And, yes, she has cats – two of them. Both Doug and Sassy are rescue cats.

Kimberley Park Elementary is another one of the schools participating in the Reading Warriors program. 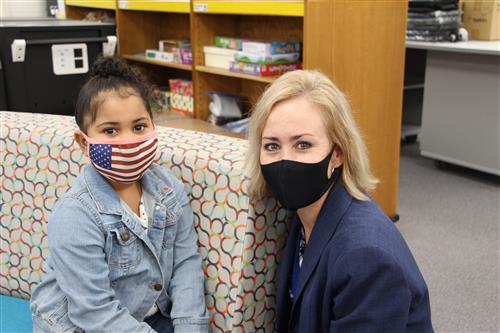 Principal Diamond Cotton’s favorite letter is “D” because it’s the first letter of her first name. When it comes to a favorite word, no word has yet declared itself to her in that way.

Like Warren, Cotton is looking forward to having Reading Warriors volunteers working with her students.

She, too, has worked with Augustine tutors at her school. She saw the value of having trained volunteers come into the school and appreciates that Reading Warriors volunteers will also be trained before coming into the school.

Cotton also appreciates that the Reading Warriors approach aligns with what teachers are already doing in the classroom.

“Them being trained in ways we already instruct is important,” Cotton said. “It’s already aligned to the school curriculum.”

“Having the Reading Warriors program allows them to have that additional support they need when they haven’t gotten it the first time.” 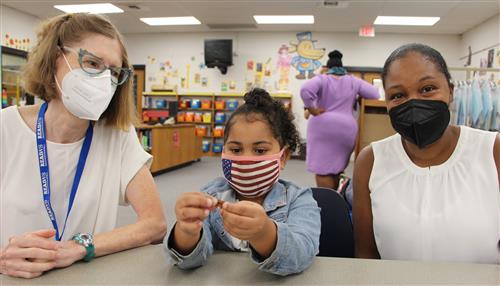 In addition to a volunteer giving a student the opportunity to spend more time on a topic, having someone spend time with a student one-on-one can be quite valuable.

“That is very difficult for a classroom teacher to do,” she said.

“The Reading Warriors program allows us to do that.”

In addition to providing that one-on-one support, having a volunteer establish a relationship with a student can serve both the young person and the adult.

“The relationship is huge with our children,” Cotton said.

With Augustine tutors, she saw how much that relationship also came to mean for the adult.

“The adult gets attached to the kids,” she said.

It’s also good that the Reading Warriors volunteers will be working with students during the regular school day, Cotton said. Although Kimberley Park already offers after-school tutoring in reading and math, some students are unable to stay after school because they wouldn’t have a way home. 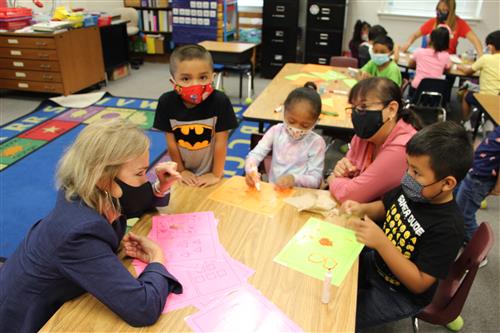 At Kimberley Park, they have already established work spaces where Reading Warriors will work with students.

“We will take all of them we can get,” she said.

For more information about volunteering for Reading Warriors, go to Volunteer.