Bus Drivers, Thank You for All You Do! 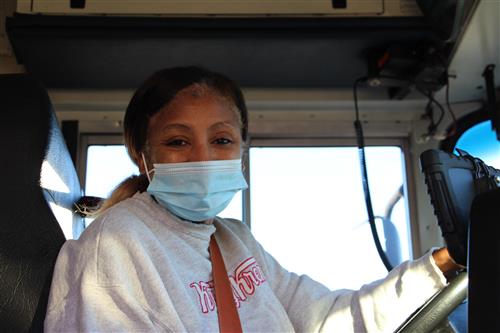 SEPTEMBER 24, 2021 – Superintendent Tricia McManus has been stopping by schools in the morning so she can let bus drivers know how much she appreciates what they do.

When she dropped by Gibson Elementary on the morning of Friday Sept. 24, she had the opportunity to visit not only with bus drivers but also with students, teachers, teacher assistants, and administrators, including Dr. Ian Olsen, the principal, and Cynthia Russell, the assistant principal.

One of the bus drivers she thanked – Shirley Ireland – has been driving school buses for 30 years. It’s work that brings her much satisfaction.

“I just love being around the kids,” Ireland said.

Bus driver Izetta Hale drove for 15 years before taking a break. She returned to driving a bus four years ago. 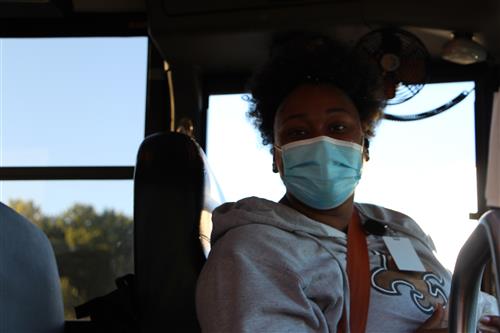 She, too, finds the work quite satisfying.

What does she appreciate about it?

“We all get on one page for our students to be successful,” Russell said. “Dr. Olsen and the teachers here really care about the kids.”

Abbye Slade, who teaches first grade, was also carrying cupcakes for the “Friends of 10” party that she and her students were going to have.

Along with assistant principal Russell, the group helping with buses included Agnes Sullivan, a teacher assistant who works with students with special needs, and Brenda Williams, the PE teacher. 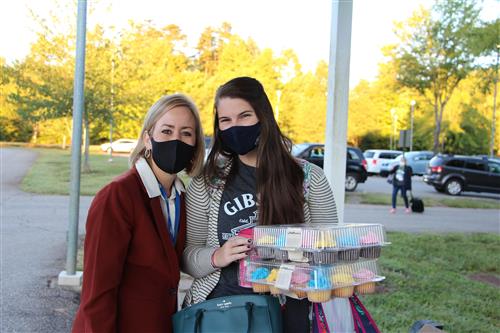 “I wouldn’t want to do anything else in the world,” she said.

All three of them attended Winston-Salem/Forsyth County Schools in the days when students were being bused to increase integration and a student might attend one school for only two years.

As students stepped off the bus, McManus would greet them before stepping onto the bus and letting the bus driver know how much she appreciates them.

By no means were Gibson students the only ones who passed through. Gibson is a magnet stop where students attending other schools can catch a bus to their schools. Students who attend John F. Kennedy High, Brunson Elementary, Atkins Academic & Technology High are among those who start their school day in the bus lot at Gibson. 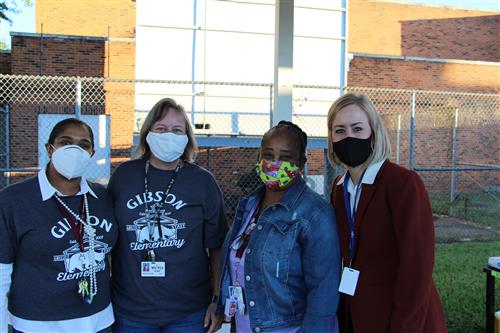 McManus visited with those students as they waited for their bus to arrive.

Senior Jeremiah Lewandowski goes to Kennedy. He chose Kennedy in part because he loves working with his hands wanted to take masonry classes with Dean Bagnoni, who was recently named Teacher of the Year for North Carolina by the N.C. Homebuilders Association.

“He’s a great teacher,” Lewandowski said. “He teaches us how to lay brick very thoroughly.”

Adam Scott, who started elementary school at Rural Hall Elementary, now goes to Brunson Elementary so he can participate in the HAG (Highly Academically Gifted) program there. He is in fifth grade.

His mother Tonya Scott teaches at North Forsyth High. So she was headed that way after dropping off Adam. Scott and her husband, Richard, also have another son, Ian, who is in the sixth grade at Hanes Magnet Middle. On any given morning, they might drop off one or both or their sons at the magnet stop. On this particular morning, Richard Scott had dropped off Ian earlier. 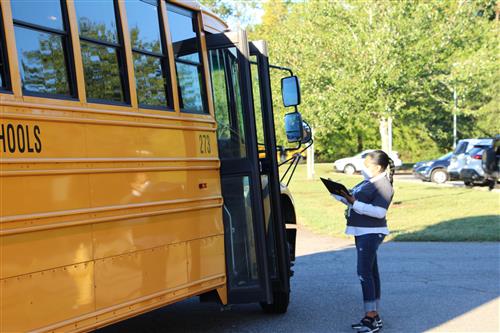