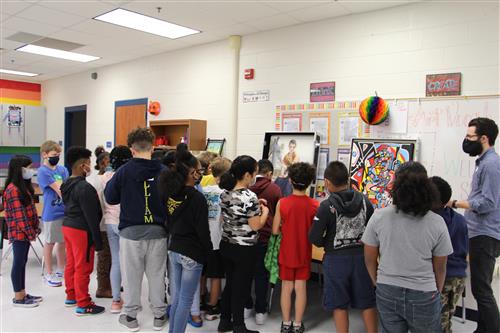 When fourth-grader Logan Sexton came into the room and saw the art, he clapped.

Asked later why he had clapped, Logan said, “Because the paintings were so cool.”

Other students were also taken with the art.

“They are all so good,” said fourth-grader Landon Tilley.

Landon particularly enjoyed an abstract piece with vivid colors that put him in mind of rainbows.

The original art coming into Stevenson’s classroom grew out of a connection that she made last spring with the Southeastern Center for Contemporary Art (SECCA). 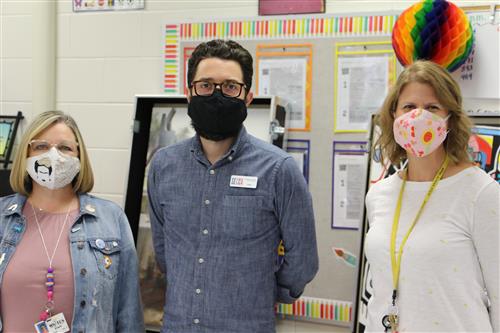 In an online meeting that Alex Brown, the Director of Programs and Audience Engagement at SECCA, held with art teachers throughout Winston-Salem/Forsyth County Schools, he told art teachers that SECCA was launching a new program that would bring original art by local arts into the schools.

As soon as the meeting was over, Stevenson sent him an email letting him know that she was in.

She also hoped that the experience of seeing other local people who had become professional artists might spark something in the students.

“I hope the students make a connection with the idea ‘That could be me,’” Stevenson said.

“I am a huge advocate for the arts.”

In addition to working as an art teacher, Stevenson’s experiences with the arts include working for Piedmont Opera and the N.C. Shakespeare Festival, and her husband works at the University of North School of the Arts. 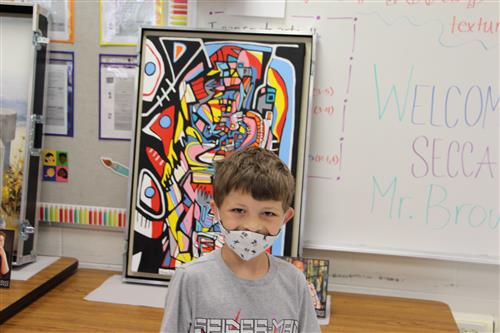 As Stevenson was setting up the classroom before Brown arrived, Principal Brooke Preslar dropped by. Preslar, too, thought the visit was a great opportunity for students to connect with work by local artists and to see the art up close.

“I think it’s going to be great,” Preslar said.

The morning was organized that small groups of students would come in, making it possible for them to see the art close up. The day started with fourth-grade classes coming in to spend time with Brown and the art. By the end of the day, students in every grade would have worked with Brown.

For the visit to Smith Farm, Brown chose work by local artists Kevin Calhoun, Ellen Heck and Owens Daniels. The mix gave students an experience of art by both sexes and art by people of different backgrounds.

Calhoun and Heck both work with oils. Daniels is a photographer. For this piece of art, he had turned a photograph he had made at a Black Lives Matter rally into an image on canvas that looked like a painting. 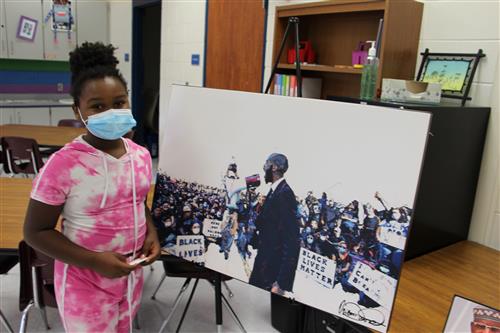 “The reason I like that is because it has a lot of colors,” Connor said.

Connor already thinks of himself as an artist. In his hand, he had a piece of aluminum foil that he was turning into a tiny sculpture.

Many of the fourth graders both like art and making arts. Many hands in different groups went up when students were asked to raise their hands if they like to create art.

With each group of students, Brown would talk a bit about each of the artists and how the artists make their art. Brown also pointed out such details as the artist’s signature on each piece.

The topic that generated the biggest reaction from every group was talking about how long it would take the oil paint that Calhoun and Hack use to completely dry. When he would ask students how long they thought it would take oil paint to dry, student guesses included “a couple of hours,” “two days,” and “a week.”

It turned out that none of the guesses were even in the neighborhood of the actual amount of time. Students were amazed when Brown told them that, depending on how thick the paint that the artist applied was, a painting made on Oct. 1 of this year might not be dry until August or October of 2022.

“It takes almost an entire year for that paint to dry,” Brqwn said.

Later, Stevenson sent along some quotes from other students.

Jocelyn Adams, 4th grade. When Alex asked "Which of these pieces of art would you hang in your room? And why?" she pointed at Owens Daniels' piece and said:  "Because it happened. It's important. And it's real."

When asked the same question, 3rd grader Harmoni Haskins pointed at Kevin Calhoun's piece and said: "I've never seen anything like it before."

“I think that's the takeaway for me today,” Stevenson said.

“The students at Smith Farm Elementary were able to see relevant, contemporary, local artwork up close and personally today. They were exposed to works that hang in galleries and museums right here in their Art classroom.”

“Their reactions and connections were personal and honest.  I can only hope that this is the first step in growing our students as artists, art patrons, and grownups who appreciate and advocate for Arts in schools and their communities.”

Smith Farm is the first school that Brown has visited as part of the new program. He looks forward to working with other WS/FC schools in the coming months, he said. At the moment, the program has six participating artists. The plan is to invite other local artists to submit applications to join the program after the first of the year, he said.