OCTOBER 4, 2021 – On the morning of Monday Oct. 4, members of The Summit Church gathered in the bus lot at North Forsyth High to pass out “thank you” bags to bus drivers.

After receiving his bag, Johnnie Cheeks said he was glad to have received it.

“It shows they appreciate us, and I appreciate them for showing they care,” Cheeks said.

Some buses have not only a bus driver but also a monitor who works with the students on the bus. That’s the case with Bus 492.

After receiving her bag, monitor Odessa Scales said, “They are thinking about us. I sure appreciate it.”

“Thank you so much.” 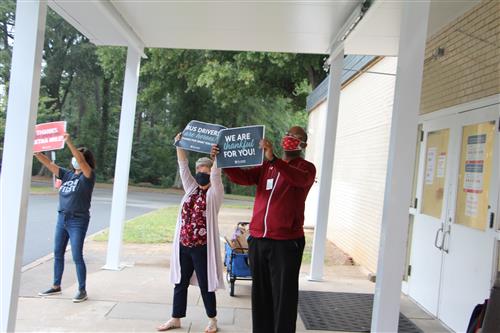 Under the leadership of Gina Newnum, the Service Director for The Summit Church, members of the church made 300 “thank you” bags. They started the process of distributing the bags at North Forsyth. Other bags will be distributed through the Transportation Department in coming days.

“We want to thank and encourage people in our community, especially those who are working through hard times,” Newnum said.

“We know some of them are pulling double routes with the shortage and we just want them to know they are appreciated.”

With all the pressures on the transportation program these days, Bill Rowerdink said, he knows some drivers may feel underappreciated. He wants them to know that he and others do indeed value the work they do.

“We are here to show our appreciation for the responsible job they do,” Bill Rowerdink said. “We are giving our children to them.” 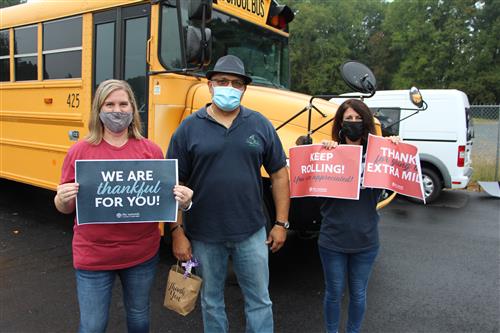 Laura Hall is married to Rusty Hall, the principal at East Forsyth High. Their daughter Kaitlyn is in the eighth grade at Southeast Middle. Kaitlyn and Laura Hall had taken responsibility for cutting out the 300 tags for the “thank you” bags, which, along with snacks, held such items as hand sanitizer.

Aaron Richardson, who is the assistant principal at North Forsyth who oversees the buses, was also on hand. With all the effort that bus drivers have been making – especially in recent weeks, Richardson said, it was great to see them receiving such a show of support.

Also present were Mark Batten and Elaine Sapp of the Marketing and Communications Department for Winston-Salem/Forsyth County Schools. Sapp goes to Summit. She and Dellacona are good friends, so Sapp was delighted to be there supporting her friend and the church's project.

After they parked, one or more people from the church would walk up to give them their treat. 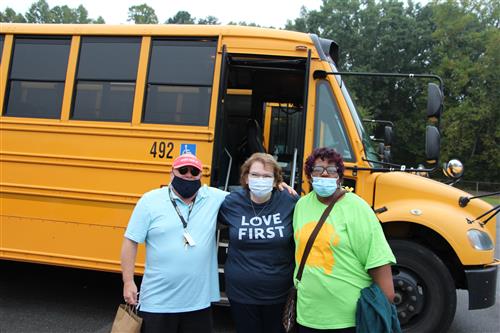 “I feel like we are appreciated,” said Kenneth Hickman. Before starting to drive a bus seven years ago, he served as a deputy with the Forsyth County Sheriff’s Office for 30 years.

Other members of the church were holding signs with such messages as “Thanks for going the extra mile!” and “You keep education moving!”