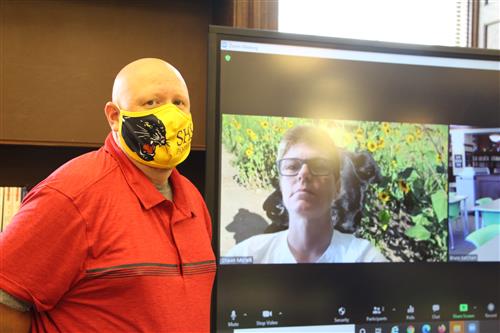 OCTOBER 8, 2021 – Back in the 1990s, Bruce Ketcham and Shawn Morelli lived in a small, one traffic-light town in Pennsylvania about 40 miles south of Lake Erie. While attending the same high school, they became friends and, over the years, they have kept up.

Morelli is a gifted cyclist who has competed in the Paralympics twice, winning three gold medals and one silver medal.

Her story is both heartbreaking and inspiring. While serving in Afghanistan as a major in the U.S. Army in 2007, Morelli was seriously injured. In the years that followed, she had to heal both physically and mentally. Becoming a competitive cyclist proved to be an important part of the healing process.

With the meeting being online, not everyone needed to be in the same room, and Ketcham set it up so that some students gathered in the media center while others stayed in their classrooms.

Asked what he hoped students got out of the experience as he was setting up, Ketcham said, “They are going to be motivated not to give up.”

Sometimes, he said, upsetting things happen that make you realize that life is not going to turn out as you envisioned it.

“I think we all have had personal and professional setbacks,” he said.

Although coming out the other side can be a difficult process, Ketcham said, it’s valuable and inspiring to learn from others that it can be done.

Morelli was speaking from Kansas. Asked why she participates in such events, she said, “I enjoy working with kids and giving back.”

“It’s fun just to see kids and interact with them. They always ask just great and intriguing questions.” 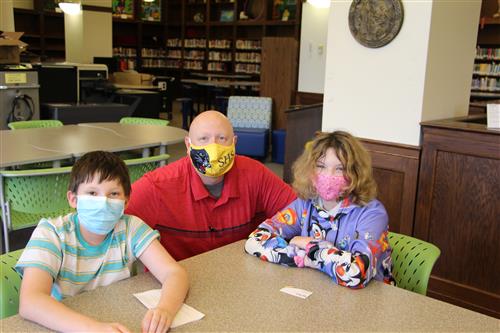 When students started coming into the media center, Ketcham’s two children – fraternal twins Zander and Zoey – were among the students who came in. Their mother and Ketcham’s wife, Miranda, teaches third grade at Petree Elementary.

When the presentation began, Morelli told students about her life leading up to the injury, how debilitating it was, and the mental turmoil that followed.

Both she and her husband served in Iraq and Afghanistan. Her injury in Afghanistan crushed her neck and spine, leaving her not knowing whether she would ever be able to use her arms or legs again.

“I got really depressed for a while,” Morelli said. “I had quite a while when I didn’t know what I was going to do next or whether I wanted to do anything.”

“I had no idea what my life was going to hold.” 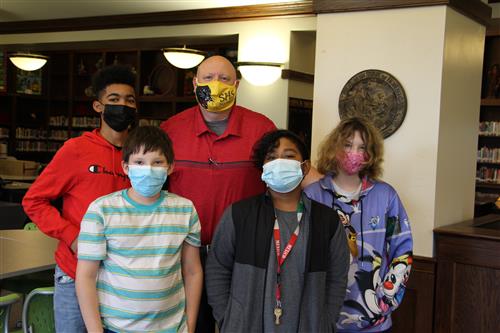 It was two years before she could walk again, and the process of working through everything both mentally and physically continued after that. While working with a physical therapist, she began cycling.

Before she was injured, she had enjoyed running and playing soccer. Because of nerve damage, her ability to do that was severely impaired even after she began recovering. She was able to ride a bicycle smoothly, though. She enjoyed doing that and starting to compete as a cyclist helped both her physical and mental recovery.

“When I was on my bike, I felt free,” Morelli said. “It saved my life and made me want to live again.”

Her message to students, she said, is that when something traumatic happens, you have to decide whether you want to do what is necessary to come out the other side.

She then invited students to ask questions. As part of their preparations for the online visit, students had prepared questions ahead of time. The list included:

“How far do you think you would travel with a bike?”

“Do you ever lose motivation?”

“What to you want us students to remember most about your talk today?”

A race might be 100 miles, she said, and, one day, she would like to ride from the West Coast to the East Coast.

Yes, they do. They are not being rude, she said, they are just not clear on the difference.

When Zander asked her what she most wanted students to remember from her visit with them, she said, that she wanted them to understand that you can recover from setbacks.

“If you want to get to that other side…you can do it.”

Asked what he had learned from the experience, Christian said, “You can’t give up ever if you are injured.”

Teylan Gonsalves came away with a similar lesson.

Zander said, “I learned to do your best no matter what.”