First-Graders at Speas Celebrate Hispanic Heritage Month with a Parade 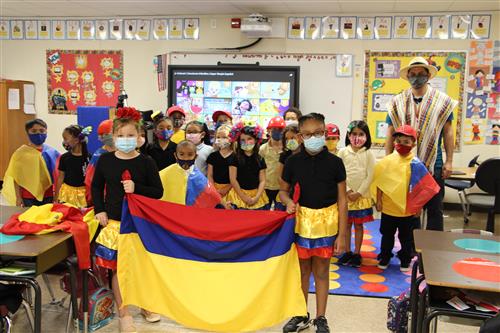 As a way to celebrate Hispanic Heritage Month, first-graders dressed in costumes representing those countries and – carrying flags and banners - paraded around the big field beside the school on the afternoon of Thursday Oct. 7.

Janier Aguirre is from Colombia, and, as his first-graders passed by students in other classes on their way to the field, one student said, “So cute!” more than once as they walked by.

First-grade teacher Tania Infante, who is from the Dominican Republic, thought the parade was a great way to help students learn more about other countries and their cultures.

First-grade teacher Sonia Paradas, who is from Venezuela, said, “We are celebrating. We want to share our heritage with all the parents and children in our community.”

Such a fun event drew in many parents and grandparents who were out at the field waiting to wave and take pictures as students came out. 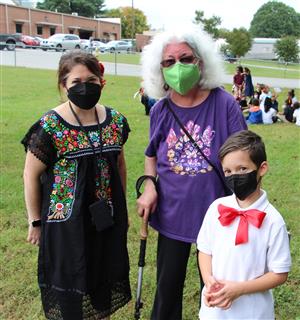 One of them was Lucyann Eyre, whose grandson Camilo Eyre-Duran is in the first grade.

Having Camilo go to Speas has been a wonderful experience for her as well, she said. “I’m learning a lot, too.”

Green thinks it’s important to instill in young people an acceptance and understanding of cultures throughout the world.

“They grow up to be better humans and have better acceptance for all people,” Green said.

Katherine Park’s daughter, Marilyn Rodriguez, is in the first grade at Speas. Marilyn’s grandparents Bill and Carolyn Park came to the parade, too.

Park’s husband Eduardo is from Spain, and Park is an ESL (English as a Second Language) teacher at Union Cross Elementary. She thinks it’s great that students at Speas are learning about cultures throughout the world.

Two of the seven first-grade classes at Speas participate in the immersion program. The other two are English only. Students in those classes paraded behind large American flags, and many students carried smaller flags from the Spanish-speaking countries they learned about in their classes. 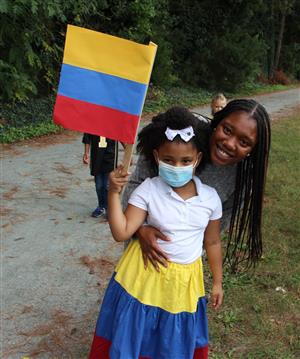 The first-grade teachers and their countries of origin are: