The "We're All in This Together" Thanksgiving Project 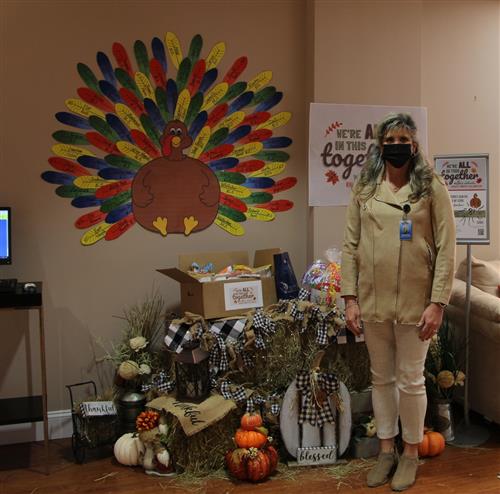 NOVEMBER 15, 2021 – On a wall in the lobby of Central Office is a Thanksgiving turkey with 81 tail feathers.

With students off the entire week of Thanksgiving this year, Superintendent Tricia McManus wanted to provide – as part of the “We’re All in this Together Thanksgiving Project” – food, books, and activity supplies for up to five students at each school.

When the invitation went out to people at Central Office to contribute, Nichole Rose, who is the Director of Leadership Development, put up a turkey – it dates back to the days when she was a teacher and principal – on one wall in the lobby of Central Office.

People at each school were invited to send the names of up to five students they thought would benefit from such a gift, and, as enough contributions came in to add another school, Rose would make a feather with the name of a school on it and add it to the turkey’s tail feathers. Before long, every school had a feather.

In a thank-you message to people based in Central Office, McManus wrote: “Congratulations, Team!!! We raised a total of $5,620 in donations from 154 individuals…I am so proud to work with such an amazing team.”

Along with the turkey on the wall, Rose, created an impressive holiday display below it.

“I enjoy decorating – especially things that mean something,” Rose said. “I feel this in an awesome project.”

When the turkey is taken down from the wall, Rose’s plan is to send each feather to its school with a note saying she and others hope they know how much everyone appreciates all they do at their school.

In her note, McManus added a special thank you to Rose and to Heather Surratt, the Administrative Assistant for Leadership Development, and Mark Batten, the Executive Director of Community Engagement, for going above and beyond to work with the team that collected and organized everything.

On the morning of Monday Nov. 15, members of the school system’s Leadership Team gathered on the first floor of Central Office to fill plastic baskets with items for each student. This was far more than just a matter of going from table to table and dropping the same items into each basket.

A custom list had been created for each student and – depending on the student’s grade level and first language – items were chosen to support activities by a student of a particular age. Also included was a book in the student’s first language. Along with books in English and Spanish, there were books in Swahili. 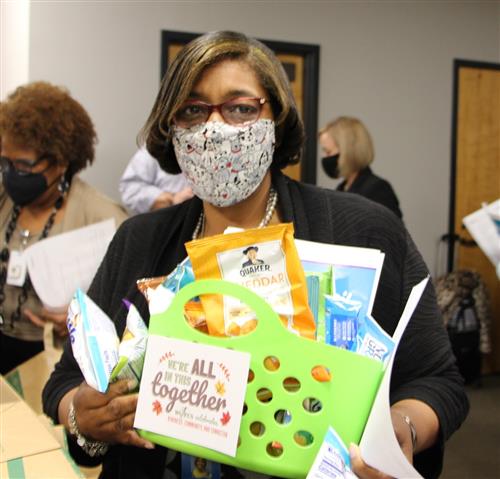 Once a basket was filled with supplies, snacks and a book, the person who had filled it would place a card in the basket and wrap it. On the face of each card was a picture of a “Roots of Kindness” mural created by students at Union Cross Elementary.

Boxes filled with more substantial food had been packed earlier. They would be dropped off when the baskets are delivered to the schools in the next couple of days.

Throughout the day, other volunteers would come in and continue putting together baskets.

As Surratt zipped here and there, she said she was delighted to support the project.

“I think it’s always a good idea to spread joy wherever you can,” Surratt said.

Batten made the point that this was a project that people could support in different ways. Some people contributed money. Some joined a team filling baskets throughout the day. Some would be heading out to the schools to deliver them.

Kindness is an integral part of the project. The “Roots of Kindness” illustration on the card included in each basket was a mural created by 500 students in kindergarten through fifth grade at Union Cross Elementary working under the leadership of art teacher Breanna Kosmos. 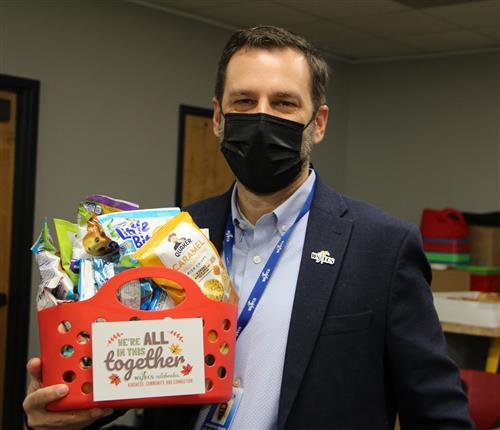 The mural included a tree filled with leaves. On each leaf, a student had written a way to show kindness to others. The mural includes a quote from Amelia Earhart: “The roots of kindness spring up and make new trees.”

That quote was one of many quotes about kindness posted in the space where the baskets were being filled. Quotes by such notables as the Dalai Lama and Ralph Waldo Emerson were among the others posted.

Invited to tell us more about the mural, Kosmos said:

“My students and I started the project over two months ago. It took about two 45-minute sessions with every class to complete. I started by doing the outlining on a large piece of white butcher paper a large tree full of branches so each student would have a spot for their own leaves. I also added the quote before the kids added any color."

"Once the outlining was done, the rest was on the kids. I had the students color in the tree and sky with a multitude of materials such as markers, paint, crayons and color pencils. Once the tree was completely colored, we started on our leaves.

A couple months ago, Ms. Sabrina Bailey, our school guidance counselor, had mentioned she wanted to do a project for the month of October for Bully Prevention Month and just wasn't sure what we could do. She and I sat down and came up with this idea together. Ms. Bailey mentioned the Amelia Earhart quote, and I just loved it so much I knew it had to be included.”

“I decided each student would create their own leaves and paint them and then we would discuss ways we could spread kindness and promote bully prevention. Each student drew their own leaves and spent time painting the leaves with whatever fall colors they desired. I let the students express their artist freedom with this part, some wanted to paint some wanted to use markers or even crayons or even just colored paper.”

“The next week the students came in we had a class discussion about ways to spread kindness as well as ways we could promote bully prevention not only in our classes or schools but in our day-to-day life. Once we came up with several ideas together, they had the option of using one created together or creating their very own.”

“The project started as a way to promote bully prevention for the month of October but by Nov. 1st it had turned into the kindness tree. it really is the giving tree that never stops giving.”

“Each student had a role in working on this collaborative mural and i couldn't be prouder of our students at Union Cross. When the children walk past their mural, they spend time reading the leaves and showing off their own leaf to their classmates. I honestly believe when the kids create a work of art that has a positive message and is larger than life it gives them a sense of pride which is so incredibly important for our kids.”

“I truly believe this was a work of heART from our students at Union Cross to our community.” 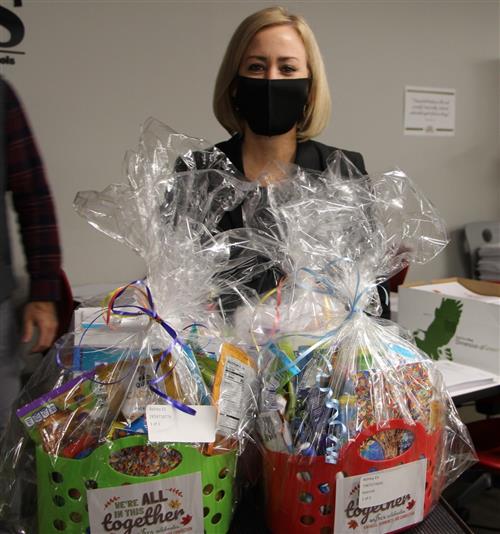 The people who served on the committee organizing the “We’re All in This Together” Thanksgiving Project include:

The organizations that supported the project include: