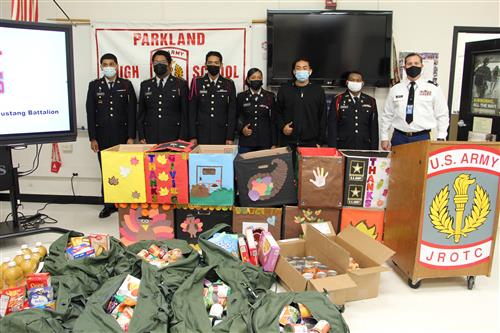 NOVEMBER 17, 2021 – With Thanksgiving coming up, the cadets in the JROTC program at Parkland High have been collecting turkeys and other Thanksgiving food to give to some Parkland families.

“It’s important,” said senior Deven Crockran, “because Thanksgiving is a holiday to celebrate family and what you are thankful for.”

For the cadets, the project is a way to say thanks for all they have been given, he said.

And, in addition to providing families with the food they need to enjoy Thanksgiving, it lets the families know that others are thinking of them and wishing them the best. 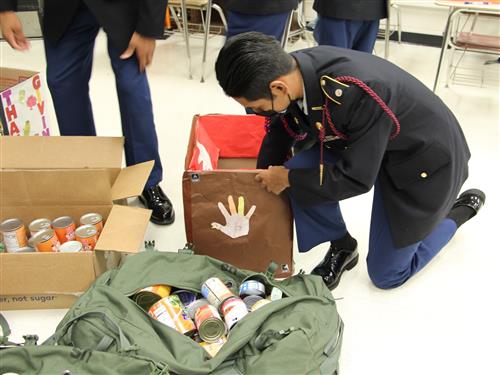 The food is being packed in boxes decorated by teams of two cadets, and they wrote a note to the family who will receive it to place in each box.

“The hand-written notes are quite special,” Baker said.

Cadets don’t know the names of the families who will receive the boxes.

Each semester, Baker said, students take on a service/learning project.

“It’s about giving back and connecting the community with the school,” Baker said.

This semester, the cadets decided to collect food to help families of students who attend Parkland.

It’s turned into a project supported by the whole school. The cadets put up posters throughout the school inviting others to participate, and, while cadets are bringing in food, so are other members of the school community. They place the canned goods and other food in bins set up in the school.

Teachers and other adults in the school community have been buying turkeys. In addition to Baker and Ramos, the list of turkey-buyers includes Principal Spencer Hardy. While junior and senior cadets were packing boxes on the morning of Wednesday Nov. 17, Hardy came in with two turkeys.

“I am proud of the work that the students are engaged in,” Hardy said.

“They are learning that being in the benevolent service of others is also part of the armed services. Col. Baker and 1st Sergeant Ramos are teaching the cadets life lessons.”

The turkeys are being kept in coolers until families come in on Friday Nov. 19 – the final day before the Thanksgiving break – to pick up the food. 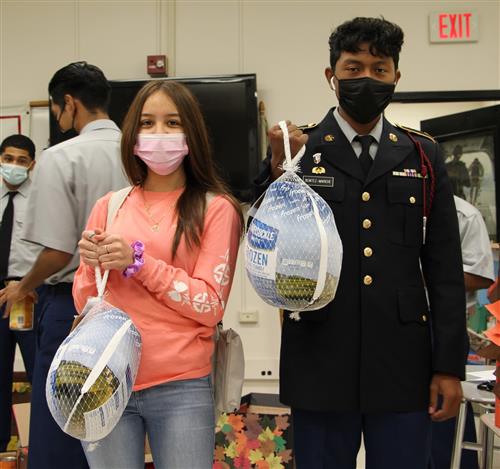 The original goal was to provide meals for 12 families. After the 13th turkey was donated, they decided to make it 13 boxes, and, if more turkeys come in by Friday, they may provide Thanksgiving food for even more families.

For Ramos, the project is a way to show appreciation for all that he and others have been given and as a reminder.

“Never take anything for granted,” he said.

“Value whatever you have.”

While talking about the project, cadets also talked about why they participate in JROTC. Some people have the misconception, they said, that the JROTC program is only for those who want to join the military after graduating.

Some do, and it certainly helps prepare them for that. The focus, though, is wider than that. It’s on helping the cadets develop as people and as leaders.

A big part of service learning is about giving back, she said, and the Thanksgiving project is one way to do that.

The mission of JROTC, Baker said, is to make cadets better citizens and an important part of that is connecting with people you are serving. At Parkland, he said, he hopes they serve as role models for others.

Junior Daisy Dimas said she decided to take the class after her sister Shayla, who is now a senior, told her how much she was getting out of it.

“It’s different from every other class,” Dimas said.

Junior Aaron Hernandez said, “I heard it was a very challenging program. At the time, I wanted that challenge.”

He is glad that he decided to participate.

“I have become a better person,” Hernandez said.

“I think it is important to help those who need it,” he said.

Crockran also said that participating in JROTC has helped him as a person.

“It’s a fun class and helps me become more active and social and prepare me for life outside of school,” he said.

Crockran is one of the cadets who do plan to enlist either after graduating from high school or college. His plan is to earn a degree at Western Carolina before going into active duty with the Marines. 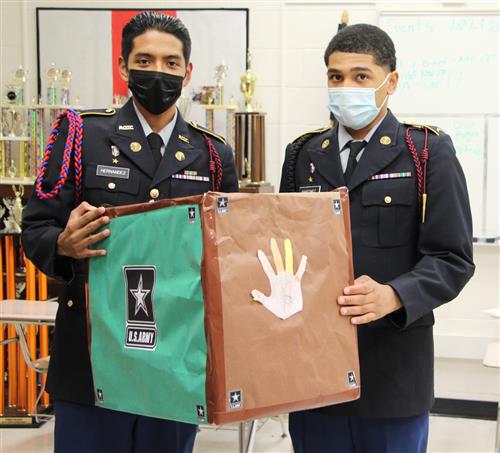 Benitez-Mariche has already enlisted in the Marines and will go on active duty after graduating from Parkland. He envisions working on such vehicles as Humvees as a mechanic.

Senior Waris Candela is the student Battalion Commander for the JROTC program at Parkland.

“This is to teach them how to better themselves,” Candela said.

Participating in the program has certainly served her.

For one, she said, “it’s breaking me out of my shyness. I talk a lot more.”

Her plan is to become a military police officer, probably in the Marines.