DECEMBER 1, 2021 – On Tuesday Nov. 30, a number of community members headed to Vienna Elementary to talk with students in fourth and fifth grade about bike safety.

For Principal Lee Koch, having them there was a double gift. It was great that they were there to talk with students about the importance of bike safety. 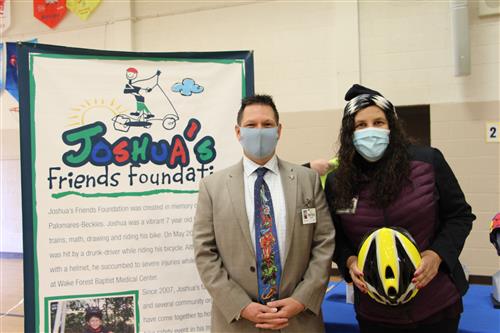 And, while showing students that people in the wider community care about them, the visit served as an excellent example of one of the important themes at Vienna.

“At Vienna,” Koch said, “we talk about giving back. We always trying to help other people.”

And that’s just what the visitors were doing – giving back, helping others, and showing students they care.

One of the people there was Michael Hosey, the Director of Community Engagement for the National Cycling Center. Earlier in November, he had come to Vienna with a trailer filled with bicycles.

“Having the opportunity to partner up with Ms. Ivester teaching cycling the last few weeks has been great,” Daniels said.

“My favorite part was experiencing some awesome social interactions between the experienced bike riders and those students who could not ride. We had several non-riders – two of those students learned to ride in the three lessons that they had with us.”

“I loved hearing students call out the rookie riders saying things like ‘Christian, you are doing so great! Keep working!’ and ‘Way to go, Hadley!!”

“The absolute best was when one of our rookies said, ‘Mrs. Daniels, I’m ready to try peddling!’ and she did! Our students loved having this experience.”

It was a wonderful experience, Ivester said.

“You can’t really put a price tag on it,” Ivester said.

She was delighted to learn that the family of one girl who learned how to ride is giving her a bike for Christmas.

In the session with fourth-graders on Tuesday, several adults spoke to the students about various aspects of bike safety.

Karen Garmon, the Director of Health/PE and Life Skills for Winston-Salem/Forsyth County Schools, introduced Luly Beckles who founded Joshua’s Friends Foundation after her son died in 2006 after being struck by a drunk driver while he was riding his bicycle.

“Luly is the heart and soul of this program,” Garmon had said earlier.

When Beckles, who is the Pediatric Trauma Prevention Coordinator at Atrium Health, spoke, she talked about her son.

And she talked about the importance of wearing helmets.

One of the purposes of the Bike Safety Day event was to provide helmets to students who didn’t already have one and to encourage students who did have one to make sure to wear it every time they rode.

When Julianna Gyves, who is a volunteer with the foundation, spoke, she held up a model of a brain. It’s important to protect that brain with a helmet, she said.

“You have to add that extra layer,” she said.

Gyves also talked about how, with drivers focusing on signs and traffic lights and such, they may not be as aware of bicyclists as they should be. She suggested that, when riding a bike, students should – if possible – establish eye contact with the driver to make sure the driver knows they’re there.

As members of the Winston-Salem Police Department’s Downtown Bike Patrol, Sgt. K.S. Bowers and Corp. D.G. Smith ride bikes on the job. When Bowers spoke to students, he, too, stressed the need to wear a helmet.

Helmets may not seem cool, he said, but “your brains are cool.”

So, it’s important to protect them.

Students then formed lines across the gym floor, spacing themselves so that they could pretend to be riding a bike. Bowers, Halsey, Gyves, and fellow Joshua’s Friends volunteer John Christopher Gyves lined up in front of the students and demonstrated such important skills as signaling left and right turns.

Others on hand included fire investigator Jason Councilman and Diane Shenberger, a registered dietician who is the Community Health & Wellness Outreach Coordinator for the YMCA of Northwest North Carolina. 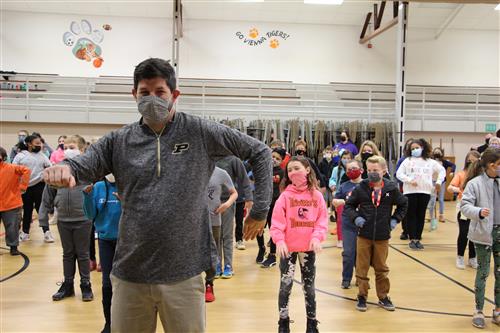 The big finish for Bike Safety Day came with students who did not yet have their own helmet coming forward to be fitted with a helmet.

The adults took care to make sure that each helmet fitted just right and, when necessary, would go find a helmet that would be a better fit.