“I feel good – pretty happy,” Makenzie said, “and I am proud of everyone else.”

Earlier in the competition, she was a little worried after missing “emitting.” With the bee having a double-elimination format, though, she was able to miss that word, keep competing, and go on to win.

“I also love it because spelling gets you far in life,” she said.

Saige Byers, who is in the third grade, placed second. With “wreaked” being the second word she missed, it was her undoing. That was not a problem.

Her favorite word is “supercalifragilisticexpialidocious,” and she plans to grow up to become a surgeon.

“I think being a surgeon helps people, and I like helping people,” she said.

Sixteen students in grades three, four and five who won the bees in their classes competed. On the morning of Friday Dec. 10, everyone gathered in the media center for the school bee.

Chris Runge, the Executive Director of Marketing & Communications for Winston-Salem/Forsyth County Schools, had come over to pronounce the words and to give students a sentence that used the word.

Runge does that at the WS/FCS District Bee as well, and, afterward, he told Makenzie he looked forward to seeing her there in February.

Before the bee formally began, Runge had each of the contestants come up and spell a simple word such as “dog” and “cat” so they could get comfortable with the logistics of walking up, pulling down their mask, and speaking into a microphone.

Other sentences gave listeners lots to visualize as the visited a “tidy” bedroom in their imaginations and watched water “gushing” out of an aquarium after a hole was made in the glass.

Students did quite well, and it was 20 minutes before the first contestant was eliminated. As words became more challenging and they missed a second word, more students were eliminated.

It was not yet 10 a.m. when Makenzie was named the winner.

Earlier, with some time before the bee started, students and adults were invited – for fun – to share their favorite word.

“Because I have a lot of them and I like the animal,” Jackie said.

She has three dogs. Allie and Shiloh are Shih Tzus and Samson is a pit bull.

“I do like things to smooth along calmly,” he said.

Speas is an International Baccalaureate (IB) school, and Katryna Jacober, the IB Coordinator who was zipping around helping in whatever ways she could, chose “serendipity.” 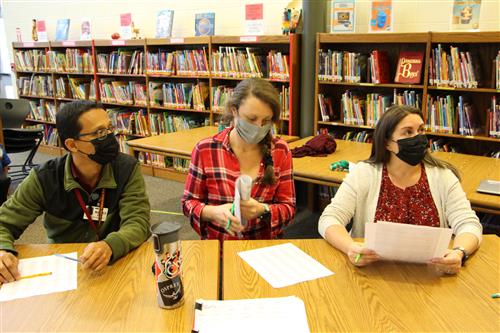 “Some of my favorite foods are the most delicious,” she said

Later, she came back to say, she appreciates the word “caring” even more.

The contestants and their grades were: 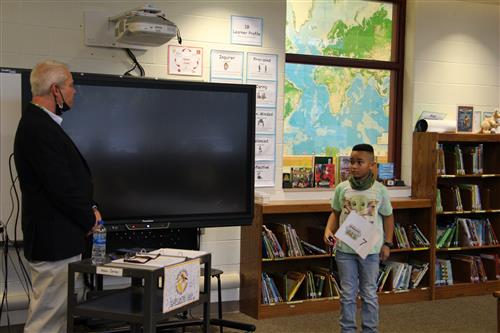