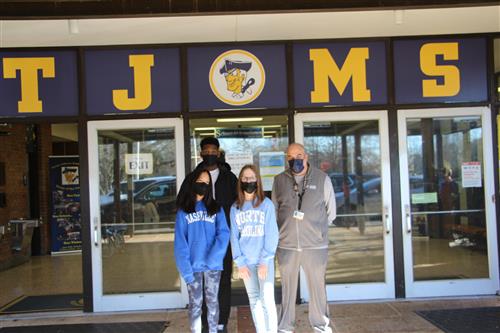 JANUARY 12, 2022 – Working with science teacher Mark Schnably, a team of students at Jefferson Middle has created a backpack designed to deter school violence.

“I think our inspiration was the Mount Tabor shooting,” said Zella Ann Cook, who is in the eighth grade.

She and most other members of the team of eighth-graders had siblings or friends who go to Mount Tabor High, where a student shot a gun at the school in September. So the tragedy touched them deeply.

And, as it happens, team member Shawn Chambers has cousins who attend Oxford High School in Michigan, where another shooting happened in November.

He really hopes that such a backpack would help students everywhere.

Their backpack design includes such elements as a metal detector and slim pockets for notebooks and other school supplies designed in such a way that it would be difficult to hide a weapon.

In December, the students’ design for the Samsung Solve for Tomorrow Challenge was named a winner at the state level. That means it will compete at the national level in the spring, and students are honing their design.

With that in mind, they have invited Superintendent Tricia McManus and Forsyth County Sheriff Bobby Kimbrough to come to the school on Friday to see their presentation on the backpack. If McManus and Kimbrough have any suggestions, the students welcome them.

“We are excited,” Zella Ann said.

A video being made of the presentation will be included in the package that goes to the national competition.

The Samsung Solve for Tomorrow Challenge was established to encourage students in grades six through 12 to use STEAM (Science, Technology, Engineering, Art, Math) to make a difference in their communities.

Jefferson Middle has a remarkable record when it comes to the Samsung challenge. In 2018, the Jefferson Middle team was one of three teams that won at the national level.

Winning at the state and national levels brought a total of $150,000 to Jefferson Middle. That money was used to buy Chromebooks for all students at Jefferson Middle, something that happened for students at other schools only more recently after COVID-19 meant that students had to learn remotely.

On Tuesday afternoon, all but Djibril, gathered in Schnably’s room to talk about the project and to continue working on their design. Djibril couldn’t be there because he is the manager for a Jefferson Middle basketball team that had a game that afternoon.

Regular backpacks are designed so that it’s relatively easy to conceal things, Schnably said. This one has a thin design that would make the bump created by a weapon visible. And the metal detector could be used to scan backpacks of other students if there was some question of whether the backpack contained a weapon.

“This could be a game changer,” Schnably said.

Such a backpack would also have the fringe benefit of requiring students to keep items they don’t really need out of their backpacks.

“It would help the kids stay better-organized,” he said.

The prototype for the students’ design uses a lot of duct tape. 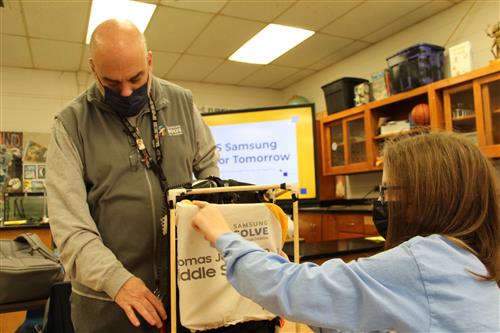 If, as they hope, the backpacks go into production one day, they envision fabric backpacks in a variety of patterns. They have talked to members of the school’s sewing club about creating a fabric version of the backpack, May said.

At the moment, they are calling their backpack Sort-A-Pac. They are open to suggestions from McManus and Kimbrough and others who might have thoughts about a name.