"Our Drivers Are Our Heroes" 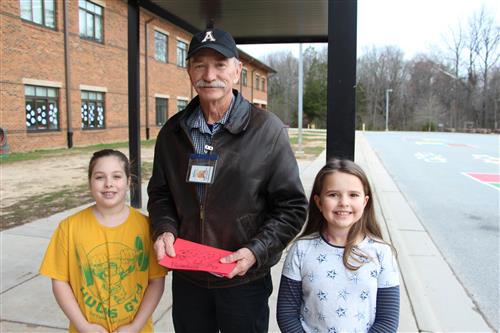 FEBRUARY 12, 2020 – After bus drivers dropped off their students at Caleb’s Creek Elementary on Wednesday morning, third-graders Alley Griffith and Oakley Herring climbed into the bus and gave each of the drivers a red-paper heart and chocolates.

It was a way of recognizing the drivers for the important role they play in the life of a school and thanking them for the care and attention they give students each and every day.

The drivers welcomed the attention.

“It means a whole lot that somebody cares,” said Freddie Bradshaw.

“I love the kids. I feel like I make an impact on some of them,” Gray said. 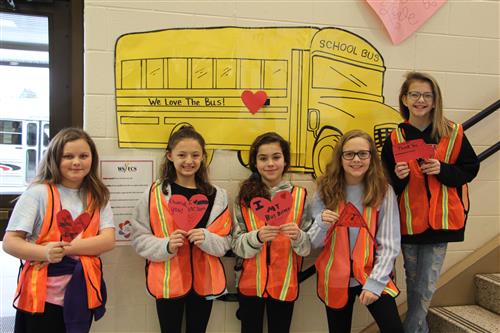 With Feb. 10-14 being Love the Bus Week, students and staff members at schools throughout the Winston-Salem/Forsyth County school system are finding ways to let bus drivers know how much they mean to them.

At Caleb’s Creek, Assistant Principal Amy Bland has been organizing each day’s Love the Bus activities.

“I think gratitude is the highest form of thought,” Bland said.

With that in mind, she thinks it’s important for everyone at the school to let drivers know how grateful they are for what bus drivers do. And they do a lot. It’s the drivers who see the students first and help set the tone for their day at school. 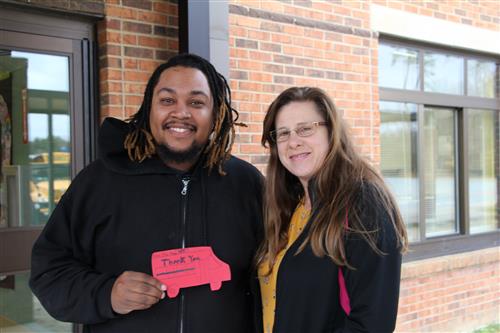 “We want to show them how much we appreciate them for what they do for our students each and every day,” Bland said.

Principal Rita McPhatter said, “They play an integral part in making sure their day gets off to a good start. They keep them safe. Lots of them form relationships with the children.”

That relationship with a caring adult means a lot, she said.

And, as Oakley pointed out when she was talking the about how much she likes riding the bus home in the afternoon, the drivers also have to deal with the kids who get a little wild.

People throughout the building appreciate the drivers.

Secretary Debbie Roberson talked about how, in addition to keeping students safe, they are the first person they see in the world of education each day and set the tone for the rest of the day.

For some students, that smiling face and positive energy means a lot, and many students come to feel they can talk to drivers about things that matter-. 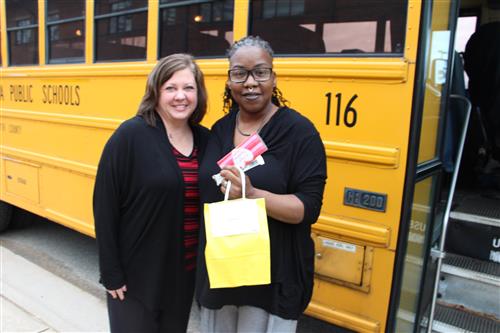 “Our drivers are our heroes,” Robinson said.

When people come into the office, she, too, works to be a positive force in students’ lives.

Simone Thompson, who is the Media Assistant, also talked about how, while keeping students safe, drivers work to take care of the child as a person.

“They have each child’s best interest at heart,” Simone said. “They are a super awesome group of people.”

Bland talked about the extra care many drivers give.

For instance, driver Terry Tucker gets to know his students so well that he may come into the school with a lunchbox in hand and say, “Jonathan left this on Seat 3.”

After receiving his treats on Wednesday morning, Tucker said, “It means a whole lot.”

He appreciates that both students and staff members have been putting forth the effort. They are some special people, he said.

During the Vietnam War, Tucker served as a staff sergeant in the U.S. Air Force, and, when Caleb’s Creek held its Veterans Day back in November, he was one of the veterans honored. 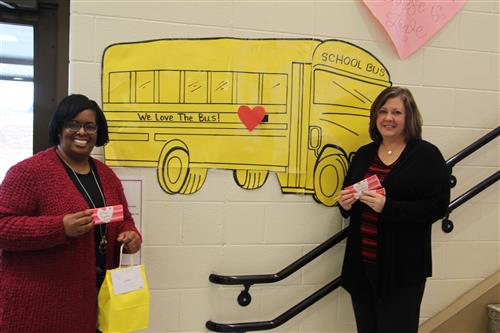 Driver Mark Helms took up driving a bus after driving long-distance trucks for years. He has been to all of the “Lower 48” states in the United States. Music is also an important part of his life, and you can hear him playing the drums in a band called Flat Blak Cadillac.

“I take this job seriously,” Helms said. “It’s nice to be appreciated.”

After dropping off her students, Joan Scales was done for the morning, and, after she parked the bus, she started sweeping it out.

She enjoys driving a bus, she said. “I like interacting with the kids. It’s an enjoyment I get out of picking up the kids and taking them home,” she said.

The key to being good with students is to treat each child as you would treat your own child, she said, and the drivers for Caleb’s Creek do that.

To help decide what to give the drivers, Bland asked drivers ahead of time for a list “favorite things.” She also asked them for their T-shirt size. On Friday, the PTA will give them a special T-shirt. 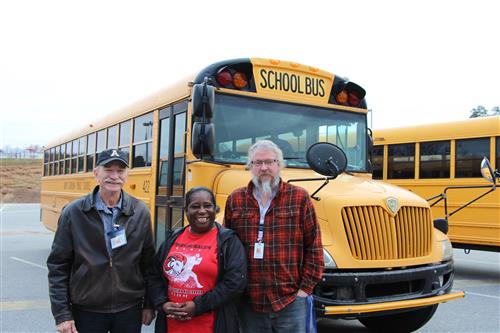 Each grade level at Caleb’s Creek picked a day to “spoil” the drivers.

Friday – second grade will provide candy bars and cards made by the students.